My plastic marine litter or yours?

The Cocos (Keeling) Islands in the Indian Ocean that were in the news recently for the amount of trash found there. Photo: Wikimedia Commons

A recent study published in the journal Scientific Reports found the remote Cocos (Keeling) Islands in the Indian Ocean, littered with 238 tonnes of plastic, despite being home to around 500 people. The study found almost one million shoes and over 370,000 toothbrushes among the 414 million pieces of plastic washed ashore on that “unspoilt” part of Australian territory.

I jested with a friend who lives in Australia that perhaps Aussies should switch to using Neem twigs instead of toothbrushes to save the planet. (In Ayurveda, Neem is a prized plant. Neem twigs were traditionally used in India to maintain dental hygiene). He was quick to revert with statistics about Indonesia being the biggest ocean polluter, along with a map showing the proximity of Coco islands to Indonesia and a remark — “Guess where the trash is coming from”.

If only the data was so black and white! It isn’t unusual to have the residents of the developed world blame the overpopulated third world, its shoddy infrastructure and its pathetic poor for all the planet’s ailments. But unless those living in the developed countries are eating their own trash and turning it into biodegradable poop, it ought to baffle their minds where all the products ingrained in unsustainable modern lifestyle are really going. Don’t they ever wonder?

Introspection can be tough when one is living the good life and there’s a fall guy handy to take the blame. In this case, it’s not just one fall guy, but the entire third world that is available for crucifixion.

So it was perhaps easy for my Aussie friend to blame the trash on Indonesia. But it will need more than a “guess” to understand the magnitude of garbage problem of this planet and to see the facts hiding in the data.

Given below is one of the most cited graphs listing the top most contributors of “mismanaged plastic waste” to the oceans.

The source of data used in the graph is the study “Plastic waste Inputs from land into ocean” by Jambeck et al. But the chart above only partially represents the findings of the study which itself was based on data gathered by a World Bank Report. The complete chart is given below. The elephant in the room that few are discussing is the data in the other columns of the chart which shows the per person per day production of waste to be the highest in the US and European countries at 2.58kg and 1.46kg per person per day. 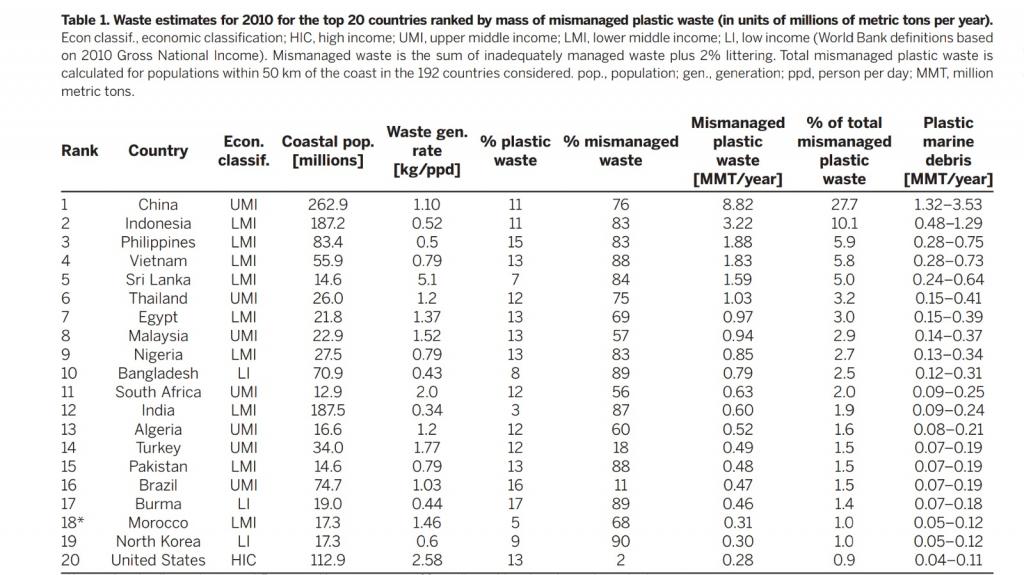 In simpler terms, The World Bank Report explains it as “OECD countries produce almost half of the world’s waste, while Africa and South Asia regions produce the least waste.” 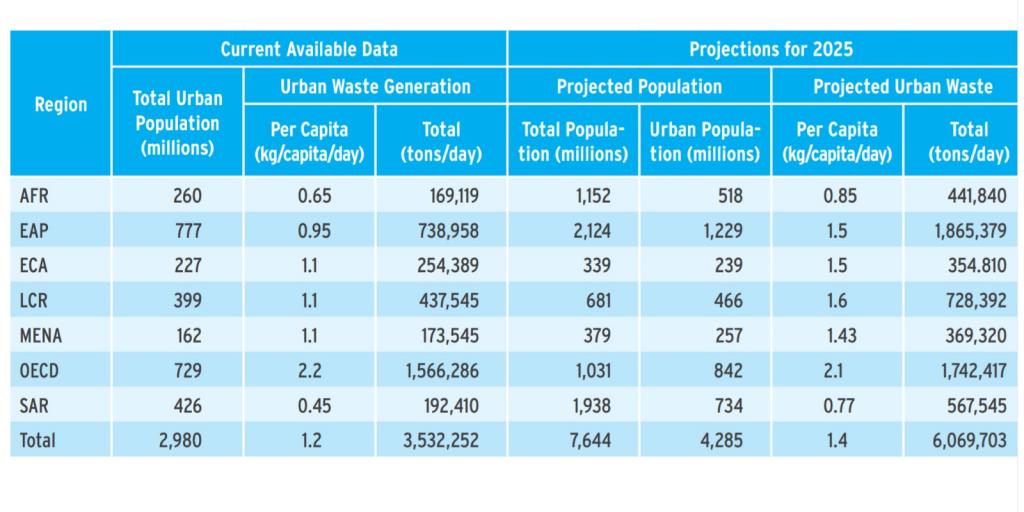 This is further corroborated in the latest world bank report, What a Waste 2.0, which states “Although they only account for 16 percent of the world’s population, high-income countries generate 34 percent, or 683 million tonnes, of the world’s waste…The three countries in the North America region — Bermuda, Canada, and the United States — produce the highest average amount of waste per capita, at 2.21 kilograms per day.” 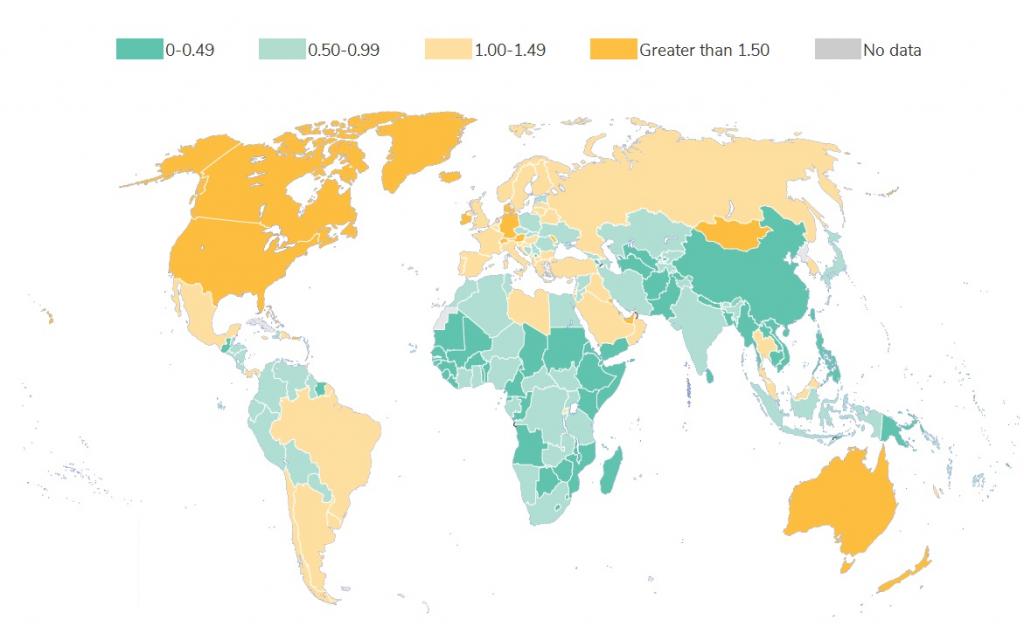 Most of the waste that the “Top countries polluting the oceans” are accused of dumping in the oceans is NOT their own. These countries are in fact, the largest importers of waste from the developed world. Yes — all those meat trays, milk cartons, beer cans, water bottles, food containers, bottles of shampoos, conditioners, laundry detergents and whatever else that the rich west consumes, “guess” where it goes once they put it out in their bin and banish it out of their sight?

Plastic is an internationally traded commodity. The empty bottle or can a person puts in a recycle bin in Melbourne or Manchester, becomes part of a global supply chain and travels across the world to China. Till 2016 China had topped the list of plastic waste importers with over half of the developed world’s refuse sent there. For the rich nations, the cost of shipping off the trash to China was relatively lower than recycling and managing it domestically. That is until 2017, when China banned the import of non-industrial plastic waste. Analysts say this was coming for some time. China had started showing signs of rigidity since 2013, though with a softer “Green fence” policy, to discourage low quality plastic dumping. However, the developed economies did little to invest in domestic waste management. So when the full fledged Chinese ban, the National Sword, came into force in Jan 2018, the developed nations sought alternate dumping grounds in other South east Asian countries like Malaysia, Indonesia, India, Thailand and Vietnam. But the plastic recycling industry in these countries is inadequate to handle the huge influx of imported plastic wastes and cannot accommodate these in a way that is sustainable. And so the trash has become what is called “mismanaged waste”. Jambeck, et al. define mismanaged waste as “material that is either littered or inadequately disposed in dumps or open, uncontrolled landfills, where it is not fully contained.”. It is the numbers for this mismanaged plastic waste that you see in the now famous list of top 20 plastic polluters of the world, but the countries actually creating the mismanagement are camouflaged.

Despite the huge per capita waste generation in high income countries, of which almost 12% is plastic, their mismanaged plastic waste percentage is strikingly low. Before you go guessing that it is their efficient recycling facilities or processes that have led to close to zero mismanaged waste, dig deeper! For these nations, recycling is another name for shipping off the waste to economically weaker countries which may be already struggling with their own garbage.

For decades, the higher-income countries in the OECD have been exporting plastic waste (70% in 2016) to lower-income countries in the East Asia and Pacific. Only the miniscule amount of high quality waste is recycled domestically in the developed world. According to Plastic pollution coalition, plastic waste has been exported and counted as “recycled” by the U.S. Environmental Protection Agency (USEPA) and the waste and recycling industry for decades. Once shipped, the final fate of that waste matters little — whether it creates a hazard for the buyers in foreign countries, many of which had inexpensive labor, no health and safety standards, few environmental regulations. Or whether the plastic waste would actually be recycled and not leak into rivers and oceans in the destination countries. Out of sight, out of mind!

But what goes around, comes around. And oceans know no boundaries.

Of the 373000 toothbrushes that washed up on the Coco islands, it is possible that few were of my Aussie friend — returned via Indonesia, by the oceans!

As an analogy consider this. Your wealthy neighbour from across the block, cleans up his home but doesn’t want to take care of his trash. He offers it to you to reprocess and make some money out of it. You know how to recycle, you need the money. You agree to process his trash along with your own. Over time your trash increases and so does your neighbour’s. His home and lawn are squeaky clean, but he consumes a lot more, and keeps passing more and more trash to you. He knows that you cannot handle any more of it, so he sells on the sly to some of your family who are lured by the money. Eventually your household cannot take in any more trash. So you start dumping it on the street — piles and piles of it. One day it rains and the garbage mountain on the street, crashes down and flows right into your wealthy neighbour’s home. He runs amok screaming that you are the biggest polluter on the street. You, the dirtiest. Meanwhile the rich guy finds another household to dump his trash. And then another…till the entire neighbourhood becomes a dumpster.

Most consumers in European countries, the US, Australia and New Zealand are probably unaware that most of the so-called recyclables are being shipped abroad to countries which are not equipped to handle it.

They sleep easy believing they have done their bit for the planet by segregating their waste and they wake up blaming the developing economies for polluting the oceans. Little do they realise that it is their household trash has made its way to the oceans or is being hazardously disposed in local communities in middle and low-income countries. This broken system is what Greenpeace calls the “recycling myth”. Extensive evidence collected by Greenpeace’s investigation in Malaysia shows a crumbling global recycling system which cannot handle the amount of waste being sent in by the high income nations. 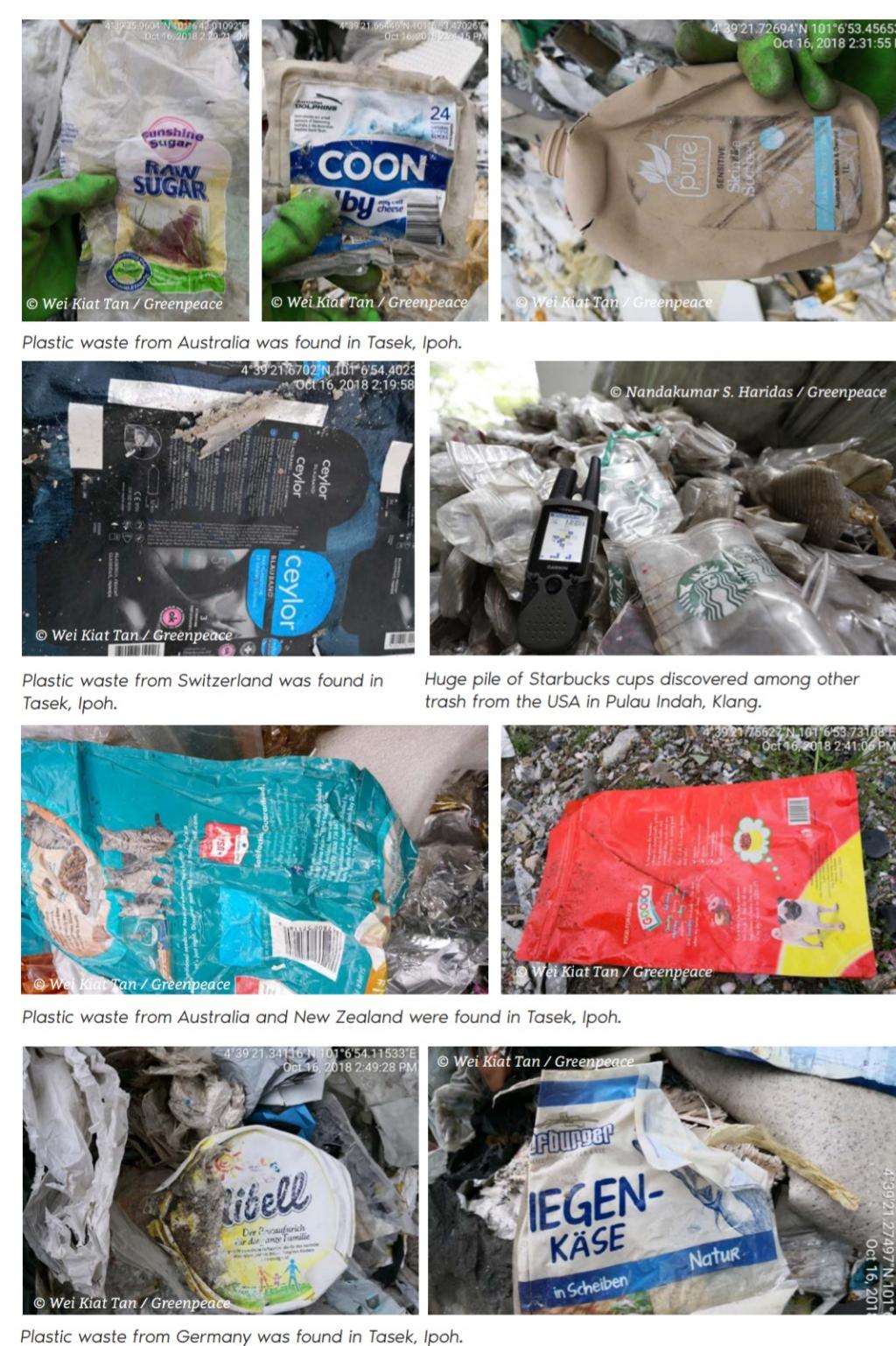 As more and more people in these nations become aware of the misdemeanour of their governments in owning up their trash, the world can hope for more equitable and effective solutions for the environment.

In March 2019, India has also imposed a complete ban on plastic waste imports. Malaysia has woken up to the miseries suffered by its people because of illegal dumping and will phase out plastic imports completely in the next three years. Thailand and Vietnam are expected to follow suit. The rich nations who had complacently blamed poorer countries for all the pollution and basked in zero waste glory are starting to feel the heat. UK had to take back 1000 tons of illegal waste that it had shipped to Poland, Australia is facing a recycling crisis and US is scrounging for newer markets for its trash. But beyond the “Say No to plastics” supermarket campaigns there appears little progress in the developed world’s efforts to reduce consumption or to recycle the waste domestically.

With developing countries refusing to be treated as dumping grounds for the western waste, where will the plastic waste go now? That is another question that doesn’t need a guess. It needs much more. It warrants bold new answers and strong action and urgent measures if we want to save our planet (and ourselves). It is an issue far bigger than saying no to a plastic bag at the checkout counter or refusing a plastic straw. The recycling myth is a broken and collapsing system that needs to be addressed by all countries, especially the countries in the first world, which produce much of the plastic wastes being exported to the third world countries. Without ethical and sustainable collective action, the garbage, the plastics and the toxins will destroy our world. Eventually it won’t matter whether it was your plastic or mine.