These places in NCR are making zero waste a daily commitment

Food wastage is often neglected or remains invisible. An estimated 1.3 billion tonnes — a third of all food produced in the world annually — is lost or wasted along, according to a Food and Agriculture Organization (FAO) study. This happens across the chain — from farms to processing plants, marketplaces, retailers, food service operations and kitchens.

The resource to produce that much food leaves a footprint of about 3.3 billion tonnes of CO2. If food waste were a country, it would place third worldwide in terms of greenhouse gas emissions, between the United States (US) and India.

The United Nations estimates 40 per cent food produced in India is lost /  wasted along the chain. It needs to reduce food wastage to feed the 194 million Indians who go hungry every day, according to FAO.

Amid the humdrum of our daily routines, the wants of the haves and the needs of the have nots, there are people who are consciously engaged in sustainable consumption and generating zero waste. Here, we profile a few of them:

Green Crusaders, a women's group in Sector 47, Noida (Uttar Pradesh), have been working on reducing food wastage since August 2018. The self-sustaining initiative has benefitted all stakeholders, including waste collectors, residents and the city authorities.

Currently, the group collects waste door-to-door in four blocks. It has streamlined waste segregation into a value chain. Tricycles for collecting waste have two sacks — one each for dry and wet waste. The later is composted while paper, plastics, etc are further sorted and sold by collectors / kabadiwallahs to generate revenue.

The group receive 600-700 kilogram waste (wet and dry) from 1,000 households a day and produce approximately 60 kg compost, which is sold at Rs 10 per kg; compost leachate, used as a liquid fertiliser, is bottled and marketed at Rs 50 a litre within the locality.

As 70 per cent families segregate their waste, good quality compost is harnessed. It is used to grow healthy vegetables, fruits and flowers in gardens at homes and local public places by environment clubs, youth groups etc.

Kabadiwallahs now want to collect only clean, recyclable waste that they can sell at Rs 250-300 per day, which can shot up to Rs 500-800 during festivals.

All this has resulted in community participation, an organised set-up of waste segregation, collection and recycling. Subsequently, all key stakeholders (flowchart below) of the system have benefitted. 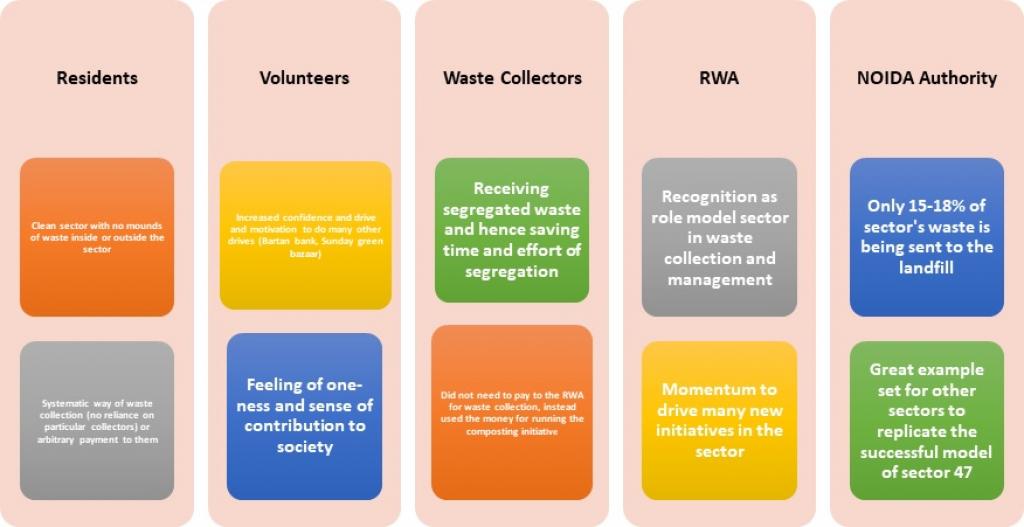 The big push for the first phase of the project came by mobilising funds from residents themselves; Nearly all contributed at least Rs 5,000 each; some donated up to Rs 50,000 and Rs 8.12 lakh was collected from the community.

Machines were procured for processing organic waste (from Riteways Verchew 200 with a four-bin system for aeration) for Rs 6.78 lakh. The total expenditure to create the system — setting-up infrastructure to operating the machines — was Rs 10-12 lakh.

Due to its success and to strengthen end-to-end segregation and sustainable disposal of household waste, the group expanded processing units by procuring new machines, installed additional eight bins and built a 1,000 square feet shed.

The group is now looking at streamlining e-waste to Chintan, an environmental research and action group and resolving the issue of sanitary waste, which goes straight to a dump.

Waste at landfill emits methane, which is 21 times more potent than carbon dioxide. Utilising resources judiciously and involving the community, Green Crusaders has cut landfill waste load to 15-18 per cent of what it was.

3. Children-led initiatives such as collection of old clothes, blue and green dustbins, etc.

4. Sowed 5,000 fruiting and flowering plants (Gulmohar, Amaltas, Guava, Jamun, etc) on a 200-metre plot, using Miyawaki — a Japanese technique to generate a 100-year-old forest in only 10 years. It was completed in August 2019 with an aim to co-create an urban dense forest on a wasteland not only to restrain garbage dumping and open defecation but also retaining groundwater, recharging groundwater tables, supporting local biodiversity, increasing green cover and curbing air pollution.

It currently composts kitchen waste from 616 people and produces up to 50,000 kg of compost a year. Every day 55-150 kg waste is generated.

Additionally, all categories of recyclable waste and non-recyclable plastics are collected at doorsteps of more than 1,000 families across more than 40 societies, using a ‘box and a bag’ approach to store paper and plastic separately at the household level.

Using this technique, it can now segregate recyclables into more than 20 categories. It has not only reduced the burden on landfill drastically but have also strengthened the value chain robustly.

No matter where waste occurs, it represents a lost opportunity to generate revenue and feed people.

India placed 102 among 117 countries in the Global Hunger Index (GHI)-2019, much below South Asian neighbours such as Bangladesh, Nepal and Pakistan.

Waste less, and you can save money, time, farmland, resources and fuel, and, since agriculture drives habitat loss, you can even help save some species.