Waste is but an imaginary concept; a discarded shoe or a toothbrush is waste only as long as you think it as such

Waste is but an imaginary concept; a discarded shoe or a toothbrush is waste only as long as you think it as such 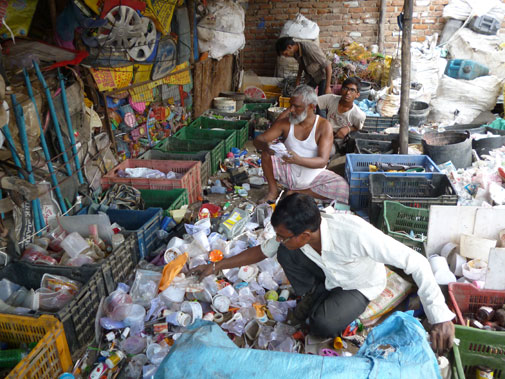 What is waste? According to the Oxford dictionary, waste is anything that has been discarded as no longer useful or required. True! But wait a minute. Let us relook at the definition—“discarded as no longer useful” would mean that the resource has lost its value to you, not to the person next to you. After all, everything in this universe is made up of the basic 109 elements of the periodic table, or the five elements referred in the Hindu scriptures. But what makes it useful or waste is the way mankind blends these essential elements together. Thus, whatever you are calling waste today has some or the other of those elements which, if recovered, would no longer be called waste.

Like many other inventions of the mankind—“waste” is also one of them, perhaps one of the most stupid ones because there is nothing that is waste. The human race doesn’t consume everything that it produces. Most of it finds a place in the dumping sites instead of being reduced, re-used, recycled or recovered. The Indian society is quite foolish in this sense. We waste even things that can be very easily returned to nature. The most common example would be organic waste. It is waste only because – who bothers to make compost out of it? The attitude prevails – just leave it aside, or better dump it on the waste-hills of your city and call it waste for another 30-40 years until you make a fancy rock garden over it. But the poor resource shall always be called a waste! "If you judge a fish by its ability to climb a tree, it shall live its whole life assuming that it is a waste," said Albert Einstein.

The way we are using our resources and then discarding them as waste and mining for more resources doesn’t lead us anywhere! Anyway, we are not going to leave any resource for the next generations to mine. But yes, as responsible ancestors, we are going to leave them treasures that we today call waste-hills and future mining companies would be seen mining these resource-hills for finished products!

I wish the word “waste” could be deleted from every dictionary and replaced with “resource”. In that case, you “are going to tell the ‘resource’ collector to pick up your ‘resource’ everyday”. At least you would start thinking that there is something in your “resource” which is why it is being called “resource” by all. If at all, some of you may still want to crib about the dirty cities we have, you’ll have to tell your friends – “See, my city is full of ‘resource’. It smells and it’s shit! I so want to move out!”

But one would ask – why is it a resource and not waste? Consider a pair of shoe. You use the shoe for about a year or two and either throw it in the bin or, if you are a little generous, you would repair it and give it to your watchman or the driver. But irrespective of your generosity – you would find it worn by someone else around. Never seen that! Start being more observant please. Finally, when your watchman, too, throws it,  the rag-picker who would pick it and take it to his station (usually a shanty place near a city-drain) where he would segregate it. He will pull the polyurethane sole out of it (remember when you were buying it and the showroom guy told you that your shoe has a PU sole, comfortable and light weight?), which would be sent to an informal PU recycling unit and finally turned into a slipper which would follow the same recycling until the end of times perhaps. Then come the laces, which would be sent to a shoddy yarn unit. If you discard a shoe in Delhi, you can find its laces in Panipat, which has the largest number of shoddy yarn units in the world. Shoddy yarn units convert rags into riches; or to be more precise rags into threads which are then turned into almost anything you may want, ranging from blankets to bed-sheets, to foot mats to even clothes. The metal clasps on your shoes would go to a metal recycler in Mayapuri and the leather on the top would go to the tannery for re-use in some other bag or wallet or a belt. So what is left of your shoes now? Nothing! So the question is – was it really waste like you thought of it to be? The same happens to your toothbrush, to your pens, to wire, to almost all that you call waste.

So, waste is but an imaginary concept and nothing but the creation of the same race that we all belong to. To be true, nature has no concept of waste; it uses everything in some form or the other. And to your surprise, whatever I am blabbering here has already been documented very nicely in Sanskrit, our Vedic language.

It means: there is no letter of the alphabet of the language that is not used in a mantra, no root or plant that has not got medicinal properties, no person who is totally useless, but what is scarce is, of course, the right management, that could put these to proper use. Thus, what is lacking in today’s scenario, too, is efficient management of the so-called waste.

In any case, the person or the body I am is also an amalgamation of the elements in this universe which took a particular shape on the day of my birth and I came to be known as a human being. I will also be waste once I die, but the elements go back to Mother Nature then. Thus, in a way, I too am a resource for Mother Nature and shall remain in this universe for another millions of years to come, but only in some other form. May be just dust, or ash, or some rich manure under the roots of a shady tree! It’s very same with anything that we call “waste” today. It only loses its value temporarily or just changes form and we start calling it “waste”! But I think, we really need to edit our dictionaries and before we pick up the broom to clean our cities, we need to clean our minds.

Satwik Mudgal works as Senior Research Associate in the Industry and Environment unit of Delhi non-profit Centre for Science and Environment.
He is currently assessing the status of municipal solid waste management in India-rules & regulations, policy structure, best practices, and roles of different stakeholders to suggest a way forward