Watch out for these balloons

Sometimes resplendent, ungainly at other times, frogs are indicators of ecological health

For many of us city-born-and-bred folks, thrills at night are restricted to sitting on a couch and watching the idiot box. For those of us who have the gumption to step out of our comfort zones and venture out for occasional night walks, a whole new world becko­ns. Recently, I was in a south Indian city for a conference and decided to walk al­ong a track on the outskirts of a village.

Among the first things I came across was a large frog sitting in wet, oozing mud, just off the village track. My imm­ediate reaction was to take a few steps closer to the frog. My foot sunk into the mud, and soon I was ankle deep in it. A few more laborious mud-caked steps brought me closer to the amphibian. The frog had pretty colours; brown with bizarre patterns of bright yellow on its back. It, however, had a weird shape. Looking like a blob of lard, the frog had a stout, round body, with a small head and a short, blunt snout. With wrinkled baggy skin, the mournful looking creature seemed to have aged prematurely.

I was looking at the Marbled Ballo­on Frog, Uperodon systoma. The frog is called so because when threatened it expands its body into a balloon-like shape, thus, making it seem larger than it really is, to ward off predators. Often, you can see the balloon frog, bloated and floating in an ungainly fashion in water.

Looking around the area, I found an open excavated pit filled with rain water from a monsoon deluge. The Marbled Balloon Frog actually spends a large amount of its time underground, during summer and winter months. Its feet have large digging appendages that allow it to burrow through wet soil with amazing dexterity. It can live for many months under the soil without feeding. During the rainy season, the frog emerges to breed. During this season, large numbers of competing males gather to call vociferously, in the hope of attracting a female to mate with.

The Indian Balloon Frog, Uperodon globulosus, is another similar baggy-looking frog that is also found throughout India. It is larger and not as attractively coloured, being plain brownish-grey. Yet another interesting frog, also found in India, is the Painted Balloon Frog, Kaloula pulchra. This frog, too, blows itself up into a balloon when threatened. When this frog calls, its vocal sacs become as large as its body, sometimes even larger!

I have always found frogs intriguing, and enjoy observing them in the wild. On many occasions when I have excitedly pointed out a frog to someone, the response has been lukewarm. It’s only a frog, my friends told me, not realising that frogs are a really important species in the web of life. Not only do they keep insect pests under control, they are terrific indicators of the health of our fragile ecosystems. They play an important role in food chain and are preyed upon by snakes and other small carnivores. Unfortunately, amphibians are under threat everywhere, from habitat decline, polluted water sources and infectious diseases. The Inter­national Union for Conservation of Nature has declared that 32 per cent amphibians worldwide are seriously threatened.

In India, we don’t even know enough about the amphibians we have, with many species being discovered and still many others waiting to be described. It would be a shame if we allowed these creatures to disappear from the face of the earth, even before we know about them?

Sanjay Sondhi is a naturalist in Dehradun. sanjay.sondhi1@gmail.com 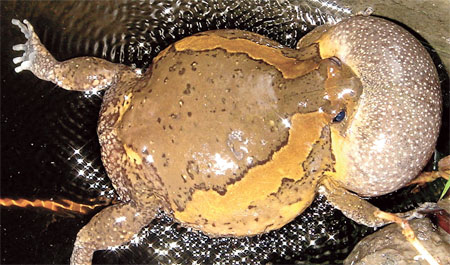