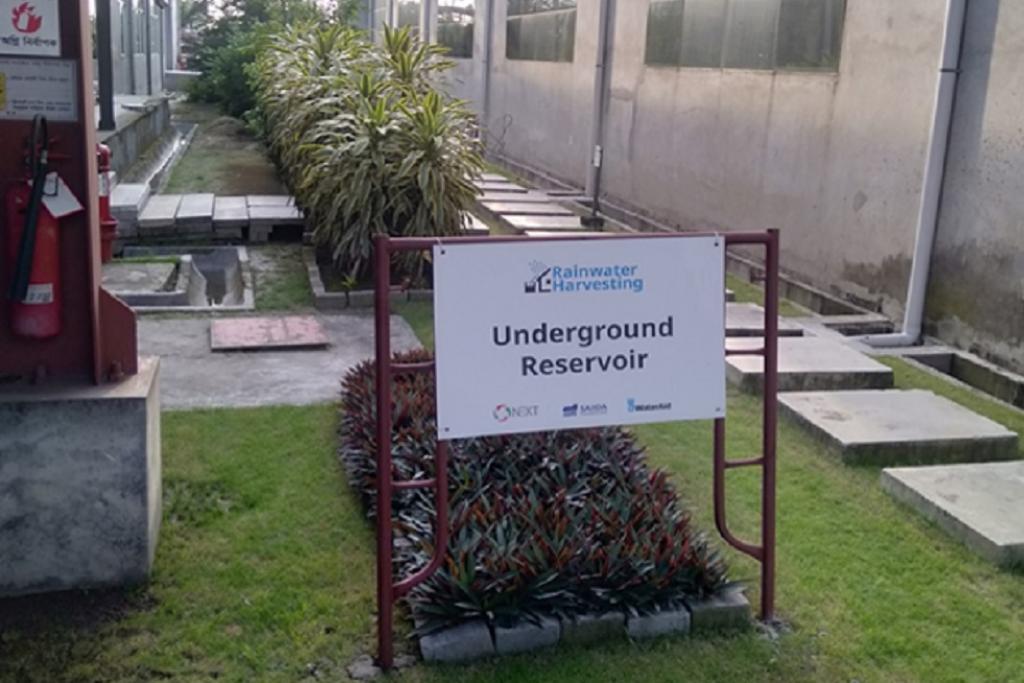 A CSE alumnus’ project to install rainwater harvesting systems at four readymade garment units in Narayanganj near Dhaka has brought them monetary, environmental and social benefits

The inter-sectoral competition for water — agriculture (89 per cent), industry and domestic (11 per cent) — exerts heavy pressure on water availability in India which, in turn, is rapidly declining. The concept of ‘rainwater harvesting’ is commonly associated with residential land uses and its applicability in the industrial sector is often neglected.

Water is excessively used in various industrial operations. In some industries, it is the primary raw material used in all processes of production, manufacturing and the resultant products. Industries are bulk water users. But the premises and vicinities of industrial establishments offer a huge opportunity for rainwater harvesting.

In recent years, the Union and state governments have emphasised on mainstreaming rainwater harvesting practices in different industrial establishments.

The ministry stated that measures like rainwater harvesting are required to be implemented in such projects.

India thus has seen a rapid change in its legislative landscape landscape lately, with firm regulations being drafted to limit the industrial consumption of water.

Since the 1990s, Delhi-based think tank and non-profit, Centre for Science and Environment (CSE), has been advocating the concept of catching water where it falls to make households, industries, institutions and urban centres realise the importance and value of rainwater harvesting.

In 2013, CSE came up with a toolkit on urban rainwater harvesting termed as ‘Catch Water Where it Falls’. This is a hands-on book with exhaustive case studies on how rainwater harvesting (RWH) is being implemented, across India — in residential, institutional and industrial / commercial settings.

CSE, with its power-packed action research and capacity building initiatives, has been able to push the idea that every person can manage their water needs by using traditional and simple technologies that can be implemented on their own premises.

CSE has also influenced global policies, strategies and practices to augment water resources in a decentralised manner through RWH and to use that water to optimise on benefits. In 2010, CSE started the South Asia Water Programme involving three countries — Bangladesh, Nepal and Sri Lanka.

India’s neighbour, Bangladesh, also faces challenges such as flooding and inundation as well as water shortages and droughts, at the same time missing on opportunities to tap rainwater as a resource.

Industrial water demand is expected to increase by 109 per cent in Bangladesh, where textiles dominate the industrial sector.

CSE has been in a partnership with WaterAid Bangladesh (WAB) for a decade now. Both organisations have been doing pioneering work on RWH and decentralised wastewater treatment in the urban water management sector.

One of the various success stories to emerge as a result of these capacity building initiatives is that of a CSE alumnus, Mohammed Zahid Hossain, from Bangladesh.

He has been associated with CSE since 2011 and has been a part of various trainings and conventions organised by CSE such as: 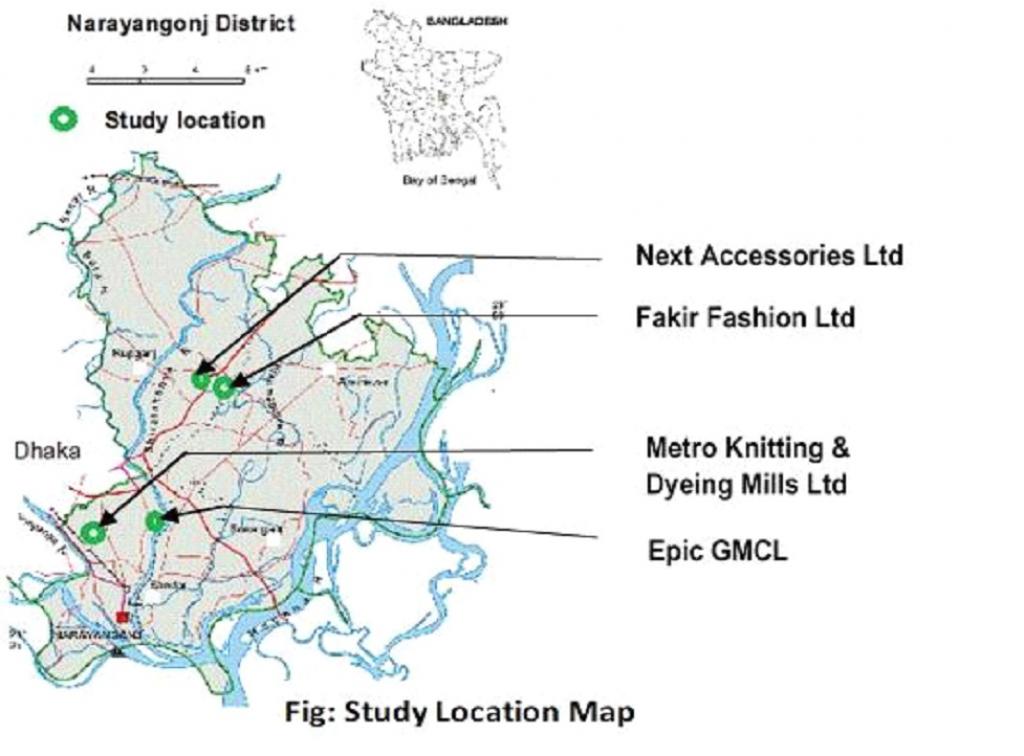 RMGs manufactured and exported by Bangladesh contribute more than 83.4 per cent of the country’s total export earnings.

However, industries such as textiles and beverages use water as a major raw material. Bangladesh’s textile industry consumes around 1,500 billion litres of groundwater annually for washing and dyeing of fabrics. This is according to a survey published in 2014 by the Netherlands and Bangladesh governments.

Water is used for production purposes. Also, offices and factories necessitate supply of water to meet the sanitation and drinking demands of their huge workforce.

Most of the RMG and textile factories in Bangladesh are situated in the central part of the country, closed to the capital Dhaka, that is susceptible to a high depletion rate of groundwater.

The groundwater level decreases by 1-2 metres due to more withdrawal than recharge. On the other hand, the average rainfall in Dhaka and its surroundings was noted to be 2,000 millimetres in 2017, according to the Bangladesh Meteorological Department (BMD 2017).

This high volume of rain, along with unpredicted rain patterns, leave these areas vulnerable to urban flooding and water logging.

Hossain and his team calculated rainfall intensity, run-off coefficient of roof material and catchment area to estimate how much rainwater could be harvested. They also went through Dhaka’s rainfall records from 1953 to 2017.

The team did a physical survey of the sites to measure the catchment area where the RWH systems would be set up. 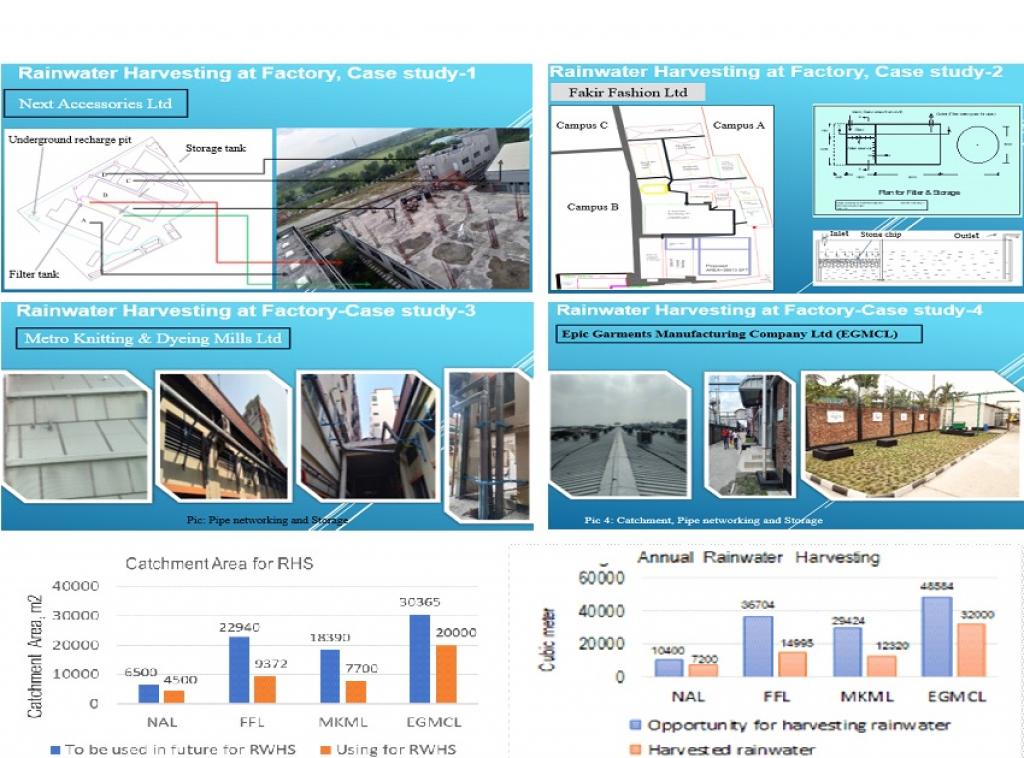 The factories are situated at an Export Processing Zone (EPZ) which means they are not allowed to extract groundwater. Water is provided at the rate of BDT (Bangladesh Taka) 37.35 per cubic metre.

All four factories now save a significant amount of money annually by incorporating RWH systems, considering this pricing rate. Savings can also be potentially increased if more catchment area is included.

The average construction cost of these RWH systems was BDT 30-40 lakh. Five to 10 years are required to recover the investment while the structural lifespan of RWH systems is 60 years, on average. Therefore, the return on invested cost for RWH systems is considerably high.

The RWH systems at these factories are treating groundwater. For this, rainwater is being stored and passes through a stone bed filter.

Rainwater harvested in these factories is tested periodically. It shows that the water is colourless, iron-free and its hardness near to 6-7 milligram per litre. That is enough to make it fit for dyeing and washing processing. So the treatment method helps in saving the treatment cost, without investing capital cost of the treatment plant.

These four factories have reduced a significant amount of their dependence on groundwater as well as recharging it to replenish the aquifer, eventually creating a balance and contributing to environmental sustainability.

Also, these systems have proven to be helpful in reducing waterlogging considerably in the surrounding areas by reducing the drainage volume.

This draws the attention of buyers, government, policy makers, civil society, etc and eventually contributes in extending their brand. It has also helped these factories get LEED and other green assessment certifications.

Good practices such as RWH help the industrial sector in changing its image and contribute to sustainable production and consumption aimed at repairing the water cycle in industrial settings.