Water being pumped out of a water-logged street in Delhi's Sangam Vihar. Photo: CSE

This blog was corrected on February 26, 2020 to reflect that Sangam Vihar falls in the Barapullah and not the Najafgarh drainage basin and that PPH stands for 'people per hectare' and not 'pounds per hour'. The story was published on February 25, 2020.

In Delhi, there are a number of informal settlements which do not adhere to official planning guidelines, building regulations and construction standards as they are not officially recognised. At the same time, the capital city witnesses severe water logging conditions in a few urban pockets during the monsoon.

The water logging in informal urban areas of the city creates adverse social, physical, economic and environmental impacts and is usually the cause of water-borne diseases as the runoff combines with solid waste and domestic wastewater. For instance, residents of Sangam Vihar (an informal settlement in South Delhi) deals with the issue of waterlogging very frequently.

Residents mention that the roads are flooded (sometimes 3-4 feet deep) for days in the monsoon. It is an annual monsoon battle for shopkeepers and residents, leading to a constant need for healthcare, which is usually unaffordable for poor people.

Sangam Vihar is an unauthorised colony with a population of around one million, located in south Delhi, spread across an area of roughly five square kilometres. It is bounded by the Mehruali-Badarpur (MB) road on the north and the Asola Wildlife Sanctuary on the east and south-east.

Sangam Vihar developed organically on the agricultural lands of neighbouring villages in the late 1970s and early 1980s, due to an influx of people who worked as construction labourers during the 1982 Asian Games in Delhi and for the development of the Okhla Industrial Area. With time, Sangam Vihar has also grown spatially, and the built-up has amalgamated with the neighbouring urban villages.

To deal with the issues of waterlogging (and flooding), there is no institutional arrangement for reporting in Delhi, let alone in Sangam Vihar, except for the complaints received by the Delhi Traffic Police. Since informal settlements are inhabited by economically weaker sections and low income groups, the residents of these areas avoid any such interaction with the police and municipal officials.

Why does Sangam Vihar get flooded?

There are no adequate stromwater drains in the area. Due to high peak runoff generation, the space required to convey this water through drains is not possible within the existing three metre-wide internal roads which often leads to traffic jams, especially during monsoon.

The roadside drains in local streets are 1-1.25 feet wide and 2.5-3 feet deep. These drains carry water from three distinct sources: 1) Grey water from the households (HHs); 2) Effluents from HH industries 3) Stormwater from streets and houses. The quality of water carried in these drains is poor.

Another reason is the high density of built-up area, with hard paved surroundings (around 90-95 per cent of total area) leaving no room for runoff to attenuate or infiltrate, thereby increasing the overall runoff. There are only a few parking spaces in name of open area.

In Sangam Vihar, as the settlement grew spatially, it led to the dilapidation of natural drains and small water bodies that had existed before, and were even demarcated on the Master Plan for Delhi- 2021. While the immediate catchment is encroached upon by dwellings, the water body itself is now a dumping ground for municipal solid waste and construction and demolition (C&D) waste.

Presently, all stormwater drains from Sangam Vihar are designed to convey the water to the main drains in the neighbourhood and eventually to the trunk drain along the MB Road in the north. Here, the runoff suddenly multiplies the existing capacity of drains from a large sized high density of more than 1,000 persons per hectare, with a catchment area of 623 hectares (ha).

As a result, the junctions on MB Road are frequently water-logged, as it receives the stormwater from various catchments.

Stormwater infrastructure, wherever available, is clogged due to dumping of municipal solid waste and C&D waste generated within Sangam Vihar. Poor coordination between the public works department, Government of National Capital Territory (responsible for drainage), South Delhi Municipal Corporation (responsible for solid waste management) and residents (who are responsible to transport their C&D waste to the nearest collection point) has resulted in gross mismanagement of urban waste, thus affecting other infrastructure in the settlement. 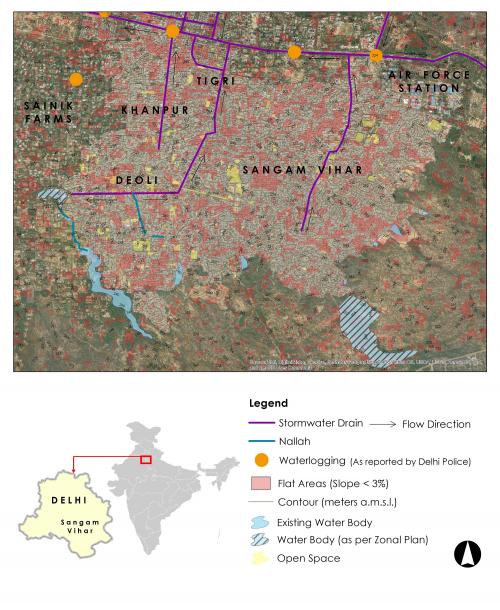 The above complexities leave no room for storm water management that makes these informal areas become more vulnerable during monsoon to water- borne diseases.

Right now, the approach is to convey the entire run-off to the trunk drain. There is no study or approach that considers the continuous built-up area as one catchment, and identifies blue-green open spaces or local sub-catchments.

Condition of open spaces and water-bodies on the west and south-west of Sangam Vihar. Photo: CSE

Certainly, if just the typical approach of constructing road side drains is followed in Sangam Vihar, there could never be any improvement in stormwater management, let alone avoiding incidences of water logging.

There is a need to look at the bigger picture in which, these settlements are a part of a larger drainage basin. This, while conserving the natural topography using natural features as opportunity areas for retention and attenuation.

Sangam Vihar falls in the Barapullah drainage basin and the overall slope divides the area into two halves, the eastern part slopes towards the main road and western part towards the green areas which includes the two designated (in master plan) water bodies.

However, the runoff is designed to convey and channelize water only to the main road (trunk drain). To cater the exceedance runoff flows, the prerequisite is to recognise the open areas near the high density catchment area of Sangam Vihar.

The natural water bodies and natural drains, near Sangam Vihar provide huge potential areas (around 35 ha) for pre-treatment and quantity control. Presently, these open areas are considered as waste land and are used for solid waste dumping.

These water bodies, along with low lying buffer areas, have high potential to carry around 50 per cent of peak rainfall intensity. Since the runoff from Sangam Vihar is expected to be polluted, the retention areas could be supported with natural treatment systems like constructed wetland before going into the designated water bodies. Pre-treatment may also designed to reduce flow velocities or assist in sediment removal and maintenance like forebay, weir, or check dam.

Where space is limited, the innovating approach could be to direct the excess flows into an open, low-lying area adjacent to the high density area — parks, urban forest, open ground, etc. These ‘provisional safe storage zones’ and conveyance channels for extreme events can be included as part of road or car park designs or could be community spaces, such as neighbourhood or housing area park and plazas.

Sequentially, the detailed study is required get the exact figures on space availability and respective runoff generated to be treated and retained. However, the overall concept of safely managing the stormwater runoff needs a serious consideration especially in informal areas of cities of India.