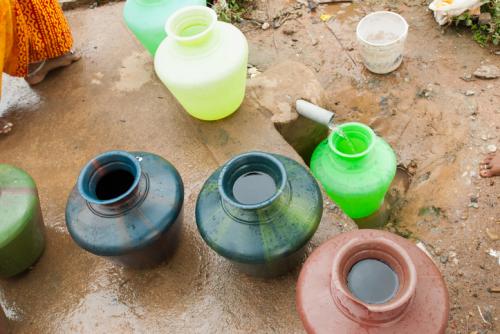 India has been witnessing severe erosion of its water table. Increasing extraction of groundwater has also affected its quality. Back to back monsoon failure in parts of India has led to great hardship and drinking water had to be transported by rail to Latur in Maharashtra last summer. We are fortunate that India is endowed with vast seawater resources spanning over a dozen states and union territories. Ensuring supply of purified sea water through dedicated network in the region would help people immensely. However, there is no mention of harnessing sea water resources in the draft National Water Policy framework bill, 2016. It is a common perception that conversion of sea water is costly, but this is changing with advancement of technology in the field. Thrust on research and technology upgradation has helped in reducing cost.

Water from the desalination process is suitable for most domestic, industrial and agricultural uses. Seawater desalination is increasingly becoming a vital option for alleviating severe water shortage around the world. Israel now gets 55 per cent of its domestic water from desalination and that has helped turn one of the driest countries into the unlikeliest of water giants (Scientific American: "Israel proves the desalination era is here" by Rowan Jacobsen July 29, 2016). Australia, North Africa, Caribbean Islands, Middle East, South Africa and USA are some of the other countries that have established desalination plans for domestic use. According to UN World Water Development Report, 2014 more than 17,000 desalination plants are now operating in 150 countries worldwide, and capacity can double by 2020. International Desalination Association claims that desalination produces 21 billion gallons of water per day supplying water in arid regions.

Examples of technology across the world

Desalination technologies are advancing rapidly and sea water can now be reclaimed by passing it through RO membranes. In reverse osmonsis, water is singled from a saline solution with dissolved salts by flowing it through a water permeable membrane. The permeate (liquid flowing through water-permeable membrane) is encouraged to flow through the membrane by the pressure differential created between pressurised feed water and the product water. The major energy requirement is for the initial pressurisation of the feed water. Nanotechnology based solutions, especially nano-metal catalysts, are gaining prominence in providing solutions to alleviate water quality problems. Israel has come out with several state-of-the-art technologies. In the US, the largest plant in the Western Hemisphere with state-of-the-art RO facility has been built near San Diego. Researchers of Israel’s Zuckerberg Institute for Water Research have made breakthroughs in membrane technology making desalination much more efficient(Scientific American:ibid). India’s Department of Atomic Energy (DAE) has developed indigenous desalination and water purification technologies. The country’s RO desalination plants primarily intend to meet industrial and potable drinking water requirements.

Is it economically viable?

The costs for desalination have decreased over the years. Water produced by desalination cost just a third of what it did in the 1990s. Israel’s Sorek plant, which is the largest in the world, can produce a thousand litres of drinking water for 58 cents (Scientific American:Ibid). According to Desalination Association of India's estimate, production cost for sea water desalination plant varies between Rs 40 to 50 per cubic metre and the production cost of desalted water from effluent varies from Rs 15 to 50 per cubic metre. Similarly, the production cost of a brackish water desalination plant ranges between Rs 10 to 15 per cubic metre. According to DAE, on an average, the cost of conversion of sea water into desalinated water is about 10 paise per litre water produce. (Source: Reply given by Minister of Science and Technology in Rajya Sabha 23.7.2015). The energy cost which is a major component could be brought down further if solar, wind or tidal wave are utilised.

National water policy should include utilisation of sea water resources for holistic development of country's water resources. The cost of sea water conversion plants may be shared by Centre, states, local bodies and private companies. Under the government’s Sagarmala project where setting up of major development projects have been contemplated in coastal states, groundwater based development should be discouraged. Instead, treated sea water should be used. Ministry of Urban Development plans to develop 100 smart cities in the country. Desalination plants can be crucial for ensuring regular water supply. Thane Municipal Corporation, which has been selected for the smart city project, has proposed to desalinate creek water and use it for drinking purposes. The desalination plant is reported to be established during the year 2017 and on public private partnership mode. This will ensure water security to the people on a long term basis.