In 2019, India became open defecation-free (ODF) after years of struggle. This feat was achieved by ensuring massive toilet coverage. The Swachh Bharat Mission (SBM), an ambitious programme, brought back the policy focus on sanitation.

It put in place a time-bound plan to improve rural and urban access to toilets across India. However, SBM lacked in focus on discussions about the management of toilet waste, which is necessary to achieve the aim of the United Nations-mandated Sustainable Development Goal No. 6.

The introduction of SBM 2.0 is focused on the next set of related and critical outcomes for safe sanitation. These include:

But how will it be achieved? According to the recent Advisory on On-site and Off-Site Sewage Management Practices published by CPHEEO, MoHUA, GOI, about 60per cent of India’s population is dependent on one or another form of on-site sewage management system.

This indicates that total sanitation cannot be achieved without ensuring effective faecal sludge and septage management. The Union Ministry of Housing and Urban Affairs (MoHUA) issued the National Policy on Faecal Sludge and Septage Management (FSSM) in early 2017.

The policy aims to facilitate countrywide implementation of FSSM services in all urban local bodies (ULB) and to set the context, priorities, and direction for safe and sustainable sanitation in each and every household in India. Since then, there has been a great momentum to scale the FSSM and many states have also issued state level policies in this regard.

Over the years, New Delhi-based non-profit Centre for Science and Environment (CSE) has promoted the agenda of onsite sanitation systems (OSS) and decentralised wastewater management.

In this regard, the School of Water and Waste offers courses and technical support in achieving sustainable citywide sanitation management. One of our alumni, environmental engineer Raghu Soma, attended a few courses on various themes of sanitation management, ranging from City Sanitation Plan (CSP), Shit Flow Diagram and FSSM. Soma then used the knowledge in the implementation of a faecal sludge treatment plant (FSTP) in his ULB, Sircilla in Telangana.

Sircilla is a first-grade municipality located on the banks of the Manair river in the Rajanna Sircilla sistrict of Telangana. The town of approximately 75,000 people is largely dependent on OSS.

Sircilla has been certified as ODF by the Government of India and is moving towards ODF++ through treating the faecal matter in the FSTP. In this process, the output of treated faecal matter is mixed with organic material and converted to high enriched natural manure through the co-composting process.

Sircilla got the fifth rank out of 1,113 ULBs in the Swachh Surveskhan result of 2018 for the South zone and fourth in 2019, in the category of cities with a population of less than a lakh.

The concept of implementation of FSTP in Sircilla evolved in 2015. That is when CSE and GIZ conducted capacity building training programmes for the municipal functionaries of the 10 ULBs of Telangana in a phased manner on how to prepare the CSP. 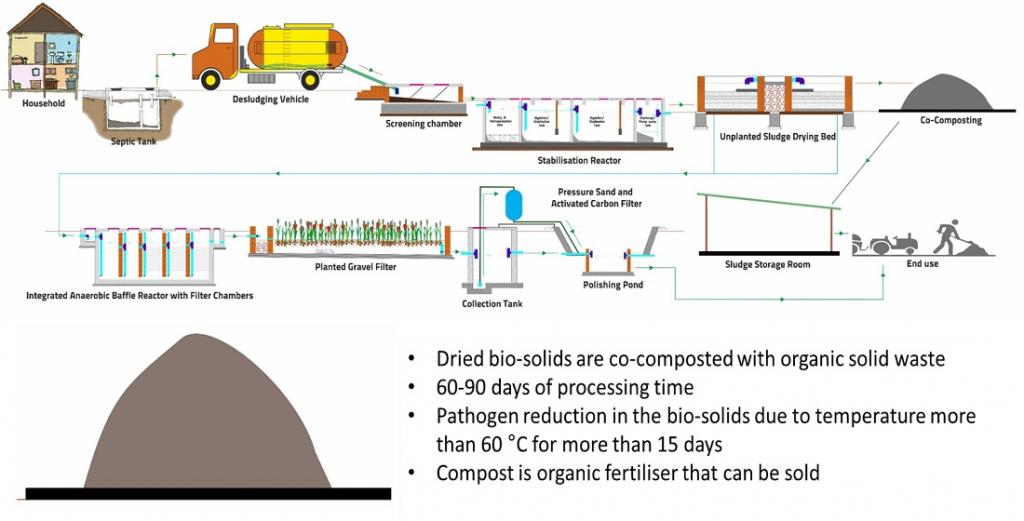 Sircilla was one of the ULB and prepared the CSP. A feasibility study was taken up by the ULB according to the CSP, followed by making the Shit Flow Diagram for the city to analyse the excreta generated and its fate.

After long consultations with the stakeholders and private operators, the ULB decided to implement an FSTP in order to address the issue of indiscriminate disposal of faecal sludge. A 18 kilo litres per day FSTP, built at a cost of Rs 1.6 crore and covering an area of 1,970 square metres, was constructed in June 2019.

The dried and treated bio-solids are used as soil conditioner in nearby farmlands. The treated water is utilised in the FSTP for landscaping and horticulture purposes. However, it can also be used by nearby farmlands.

Currently, scheduled desludging is taking place at an institutional and commercial level.

Because of this project, manual scavenging, pollution in the town and also illegal dumping of faecal matter on open grounds or water bodies in the ULB’s jurisdiction has been stopped.

The case example indicates that there is a need for an innovative and holistic approach that considers the engineering aspects, as well as the incorporation of social, economic, institutional, cultural and environmental factors in urban sanitation and wastewater management.

In this case, the municipal and district officials, non-profits, TLF / SLF / SHG members and private operators were involved in the planning and implementation of the FSTP. Each city is organised in a unique way and local actors need to acknowledge shared responsibilities and work collaboratively to chart their own path to ensure urban wastewater and sanitation management.

FSSM could be an opportunity to re-consider future strategies. In this way, localisation is not a bad idea. It is building a new future, based on local resources with local communities. This challenge of affordable growth is what will drive sustainable growth in the future.