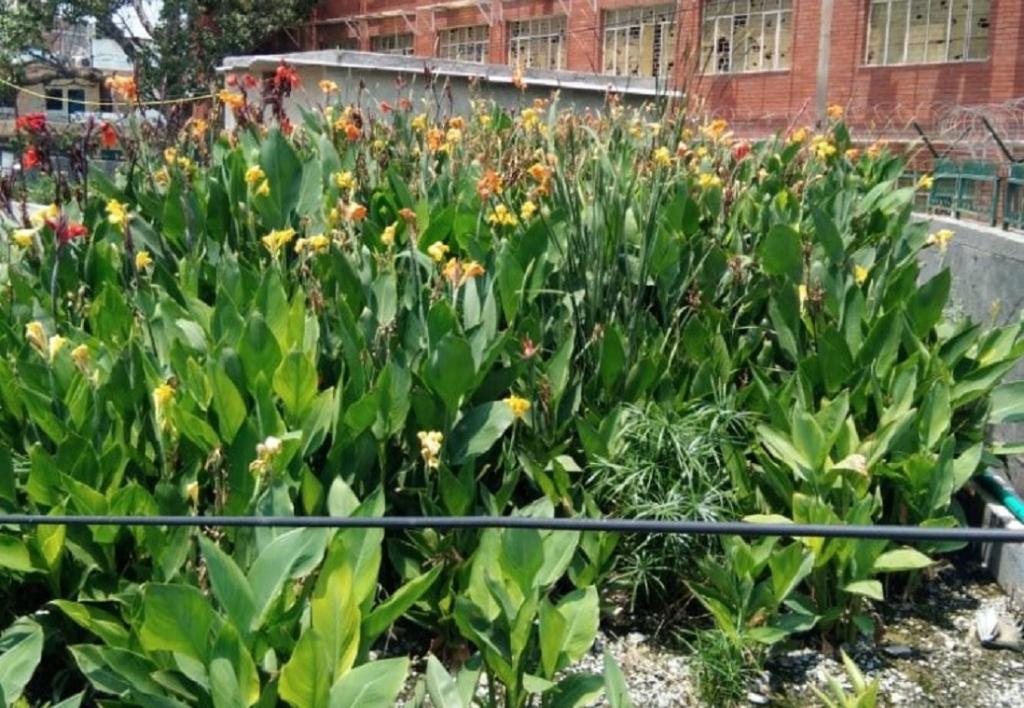 Plants growing in the reedbed system at Aya Nagar in Delhi. These have roots containing rhizomes which further clean the waste water generated by the project at the site. Photo: CSE

CORRECTION: This blog was published first on October 30, 2020. According to that version, the capital cost of the project mentioned in the piece was Rs 1.2 crore. This was corrected to Rs 2.1 crore on November 1, 2020. We regret the error

The fast pace of urbanisation is leading to the outgrowth of cities, expansion of peri-urban areas and increase in the number of urbanised villages, informal settlements and unauthorised colonies. These generally lack access to infrastructure services, particularly sanitation facilities. This often leads to environmental pollution and endangers the health of local residents.

The case of Delhi

In a recently concluded socio-economic survey of Delhi, 0.6 per cent households were found to still practice open defecation, 60.1 per cent of the households were connected to piped sewerage, 36.7 per cent had septic tanks and 1.2 per cent used toilets linked with open drains or open areas.

This leads to aesthetic nuisance, threat of organic pollution and several infectious diseases in epidemic proportions due to the contamination of ground water and drinking water resources.

Laying sewer networks is a cost-intensive and time-consuming project, keeping in view the city’s dynamics. It may not be financially viable to all areas of the city. On- site sewage management is gaining momentum as an alternative approach to the current conventional practice.

The advisory on On-site and off-site Sewage Management Practices by the Central Public Health and Environmental Engineering Organisation, Union Ministry of Housing and Urban Affairs, Government of India is a timely initiative to guide states / Union territories and other stakeholders on safe and holistic management of sewage and faecal matter.

Aya Nagar, situated in southwest Delhi and adjacent to the Delhi-Haryana border, is one such provisionally regularised unauthorised colony and is majorly settled by migrants from all parts of the country.

Being an unauthorised colony, there was no provision for drainage. Hence, the storm water which flowed in open channels along the roads, also got mixed with sewage.

In a few cases, the sewage of houses was stored in a sump below them that were emptied by portable vacuum pumps and discharged in an unregulated manner, leading to unsanitary and extremely unhygienic living conditions for all citizens.

The open channels also became extended garbage bins, choked with plastic bags and other forms of solid waste. The open channels would overflow on the roads, especially when it rained — resulting in serious health hazards.

GREHA, a non-profit primarily consisting of environmental design and planning experts based in Aya Nagar, spearheaded the challenge to improve the sanitation scenario of the neighbourhood.

The then-chief minister of Delhi, Sheila Dikshit, visited Aya Nagar in 1999 and declared it to be a model village. The Aya Nagar Vikas Samiti was then constituted and registered in 2001 to be the voice of local people, along with a task force to implement the plans proposed for development by the government.

In 2008, the government of Delhi, under a scheme of the Delhi Kalyan Samiti, granted research aid to GREHA, to propose options and possibilities that could be initiated to make Aya Nagar a role model.

After extensive research and consultation with experts, GREHA proposed a new technology called small-scale (bore) sewer system in combination with the Biodigester technology developed by the Defence Research & Development Organisation (DRDO), that could be installed below the roads without entering private houses.

The project was started by mapping and surveying the neighbourhood, which included physical surveys, documenting the internal layout of the houses and conducting a demographic survey.

An important part of the project was to engage and consult with community members. A scale model was created and used as a planning tool. Delhi Urban Shelter Improvement Board (DUSIB) spearheaded the project.

Sewage treatment in the biodigester takes place through the action of a specially designed bacteria which is the inoculum introduced into the airtight container. The inoculum has the property of regenerating through its action with faecal bacteria to produce treated effluent.

Biodigester installation is 50 per cent cheaper than septic tank and gives out natural methane and carbon dioxide (minimal air and water pollution) and requires 25-30 per cent less space, compared to septic tanks. Per unit of biodigester for household costs Rs 30,000-50,000, based on the location.

The treated effluent from the biodigesters, along with grey water from the households and rainwater undergo secondary treatment through bio-remediation in a 100 kilolitres per day reedbed system in the nearest suitable open space available.

Technical support for implementation of the reedbed system was provided by Delhi-based nonprofit, Centre for Science and Environment (CSE). In the reedbed, wastewater is circulated through a crushed stone medium. Within this are growing plants that have roots containing rhizomes which further clean the waste water.

The reedbed helps in removing nutrients from the wastewater. Reedbed-treated effluent is then passed through multi-grade filter and activated carbon filter for final treatment and disinfection.

Thus, the scheme shows a way of creating a closed loop water supply system, which, if carefully engineered to an extent across the urban area, could also play a major role in controlling the pollution of the river Yamuna.

This hybrid system has been put up in Z-block, Ayanagar which caters to the population of around 1,200-1,500, without disturbing the privacy of households and with no special maintenance requirement. The whole system cost approximately Rs 2.1 crore.

Way forward
The Aya Nagar project has been instrumental in representing the will of the local community. The project is an example of a good, successful model for effective sanitation improvement by a decentralised sewage treatment system in a high density habitation. It was done with little political help and technical support. The project has caused remarkable improvement in the drainage and sanitation scenario of the Z block.

However, to make it a more robust and sustainable system, the following recommendations can be considered.

Through a community-embedded approach, the aim was to devise techniques for making the urban system responsive to the imperatives of social justice and ecological viability.

The Aya Nagar pilot project is a prototypical model for evolving a sanitation management programme in a high density settlement. The methods and techniques evolved will serve as a guide for informal settlements in Delhi and across the country.