Germany will contribute Rs 22.5 crore to the three-year-long project 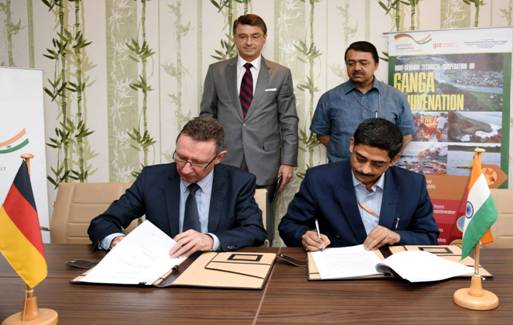 India has signed a Memorandum of Understanding (MoU) with Germany to clean Ganga by adopting successful models of management. The agreement was signed on April 13, 2016, between Ministry of Water Resources, River Development and Ganga Rejuvenation and German International Cooperation (GIZ), in the presence of water ministry secretary Shashi Shekhar and German Ambassador to India Martin Ney.

The initiative was pitched during Indo-European Water Forum organised by National Water Mission co-partnered with the Environment Directorate-General of the European Commission in November 2015.

The project will begin in Uttarakhand with the scope of expansion to other states downstream. The technical know-how of Germany will be "immensely fruitful" in pollution abatement of Ganga said secretary Shekhar. India plans to adopt successful river basin management strategies to clean Ganga and replicate the Rhine and Danube model.

Danube and Rhine, two of the longest rivers in the European Union were degraded due to domestic and industrial discharges. After the implementation of river basin management measures in 1970, chemical pollution and organic load of river Rhine has reduced by more than 80 per cent. The quality of Danube has also improved as compared to the 90s—now ranked “medium class” as per Czech water quality criteria.

To prevent pollution, sewage from adjoining areas was connected to treatment plants, reducing direct discharge of untreated sewage into the rivers. Treatment of domestic and industrial wastewater and efficient adoption of laws has decreased organic load and improved the water quality of these rivers in past 20 years.

While the geomorphological features of these rivers are different from the Ganga, their pollution related problems are similar (Table 1). The proposed project can be successful only if there is stringent implementation of laws.