What desludging model should an urban local body adopt? Some suggestions

All models have their pros and cons and the model to be used differs from place to place; This isn’t a one-size-fits-all kind of idea

Urban local bodies (ULB) all over India are slowly starting to adopt measures for faecal sludge and septage management (FSSM). But they struggle to sustain their faecal sludge treatment plants (FSTPs) due to several reasons.

One important reason is not to pull up the sufficient load of faecal sludge in accordance with the design criteria of FSTP. This can eventually lead to the FSTP’s failure otherwise.

More than 700 cities / towns are in various stages of FSSM implementation. This is according to the NITI Aayog report Faecal sludge and septage management in urban areas, Service and business models, 2021.

Over 220 FSTPs are under construction (with 150 operational plants). What kind of desludging model should a ULB go for to ensure emptying and desludging so that the operations of FSTPs can be sustained?

Should it be schedule-based or demand-based? What are the factors that need to be considered before selecting the desludging model for a ULB?

The National Faecal Sludge and Septage Management Policy recommended desludging of septic tanks once every two-three years. This period varies from two-five years in other countries.

In the Philippines and Canada, the onsite sanitation system (OSS) is inspected and emptied according to the sludge accumulated. 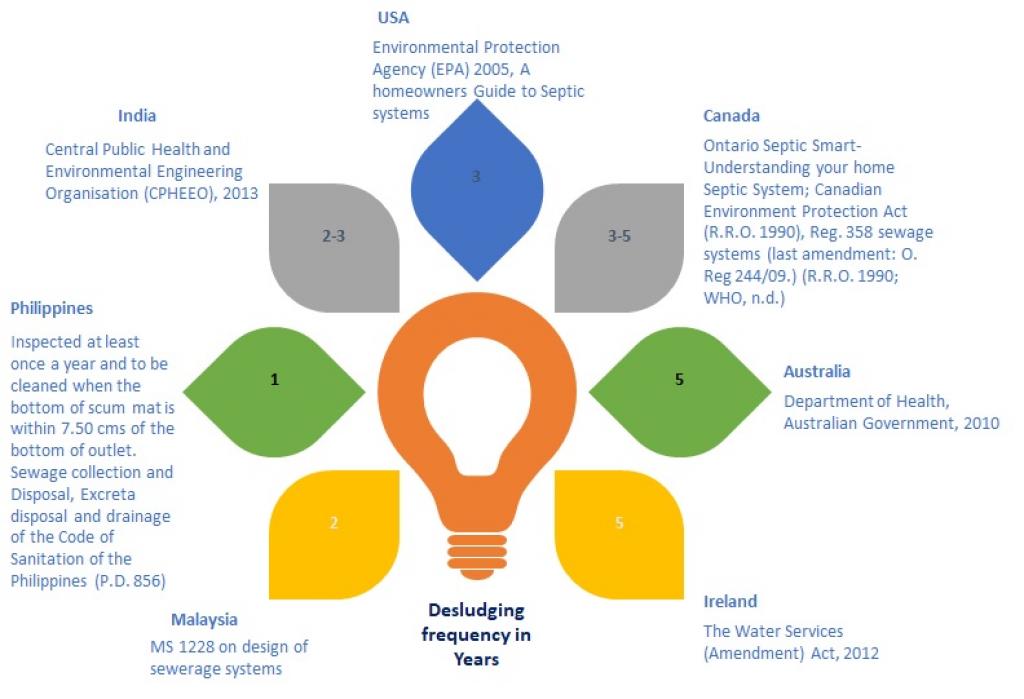 What are the criteria for the varied desludging frequencies adopted worldwide? Is it related with access, typology of OSS, operational scheme, financial and personnel arrangements, best practices and regulations, awareness generation and behaviour change, byelaws and taxation? This question needs to be answered.

Households in India traditionally construct huge septic tanks that are to be cleaned once in 10-15 years. Is scheduled desludging the best model to go for in this situation?

There are several other factors apart from this that also need to be considered before adopting the desludging model. The cost of desludging is competitive in large ULBs, considering stiff competition from multiple private players.

Smaller ULBs have less demand. Therefore, the private operators have less profit margins. The scenario in small ULBs becomes an expensive affair, considering the monopoly of a few.

This leads to one operator managing the nearby areas and charging humongous fees. The higher the competition in an ULB between private players, the lower the rates. In such cases, demand-based desludging seems to be more appropriate and practical in the interests of household owners.

There are several successful examples of the implementation of the scheduled desludging model in Maharashtra as well as in Asian countries. 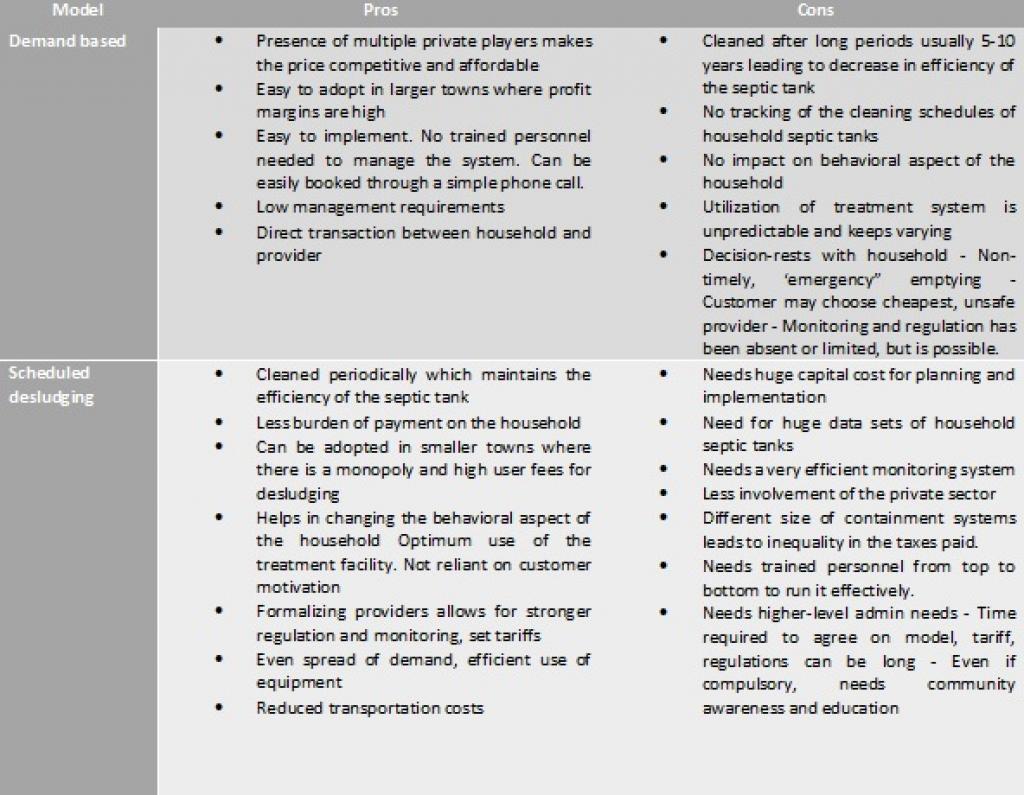 Septic tanks are cleaned once every 2-3 years according to the the schedule planned by the authorities in Malaysia and the city of Wai in Maharashtra. The households have to pay a desludging or sanitation tax.

The benefit of this model is that since it is a monthly tax, households can easily shell out a small amount towards desludging rather than a big fee at once. The implementation of this model is possible through stringent and efficient tax collection mechanisms to make the system financially sustainable.

The keys to the success of scheduled desludging programmes in Bangladesh, Indonesia and Nepal are building local government capacity for broader sanitation management and investment decisions, as stated by Juliet Willetts from the University of Technology, Sydney.

There are four key strategies underpinning an experiential learning approach. These include:

Desludging must be considered as one part of a bigger sanitation challenge in Willetts’ view.

Between 1993 and 2013, the Malaysian government nationalised sewerage services and provided regulated septic tank desludging services through a private concession to the Indah Water Konsortium.

After running successfully for two years, it ultimately failed due to weak enforcement of septage management policies. The scheduled desludging was not provided as a regular service and the regulatory agencies did not fine households that failed to do scheduled desludging according to the law.

A key reason for the poor sustainability of the programme in Malaysia was also the direct user charges that households had to pay, which reduced demand. On the other hand, low collection meant inadequate funding for regular operations.

Tamil Nadu has adopted a different strategy. The state has 67 per cent of urban households dependent upon septic tanks. A light touch, regulated de-sludging approach helped in addressing on-demand desludging, according to the Tamil Nadu Urban Sanitation Support Programme.

The success of the the desludging programme lies in ensuring minimal disruption to the existing market to protect livelihoods, prioritising worker health, safety and welfare and adoption of differentiated models based on categories of generators.

To summarise, all models have their pros and cons and the model to be used differs from place to place.

This isn’t a one-size-fits-all kind of idea. In smaller towns, scheduled desludging model seems financially viable, considering the low demand for desludging but difficult to execute as budgets are low.

Subsequently, the demand-based model serves better in larger ULBs where there is considerable competition amongst players. In order to decide on the models:

Once all factors are considered, the decision can be made. Usually, the model which is favored by the households usually works better than the one being imposed on them. ULBs can also work around their existing resources and database to understand what works and what doesn’t work in terms of adoption of the best desludging model.