The ASHAs will now go knocking at the doors of young married couples and tell them that delaying their first child for two years after marriage is good for the health of the mother and the child. If the couples are convinced, ASHAs will be rewarded with Rs 500 each.

NRHM promises them another Rs 500 if they make couples delay the birth of their second child by three years. The ASHAs will hit the jackpot if they manage to convince the couple to opt for the permanent method of contraception—sterilisation—after the birth of the second child. The prize money is Rs 1,000, more than what the ASHAs get for bringing a pregnant woman to the hospital for delivery.

On paper, the scheme seems perfect. Women will bear fewer children, will space the birth of their children and will not have to go through multiple pregnancies. This will ensure their own health and that of their children. It is a win-win situation for the government. Fewer births would mean fewer infant deaths and fewer deaths of women during delivery.

Counselling could turn into coercion

But like most family planning schemes, this too may turn into another carrot-and-stick policy to bring down the country’s population, fear NGOs. From convincing through counselling, the scheme can easily turn into a means by which family planning is imposed on the poor and the illiterate. ASHAs may end up working on the scheme only for money and push themselves to increase the number of women they bring for sterilisation. 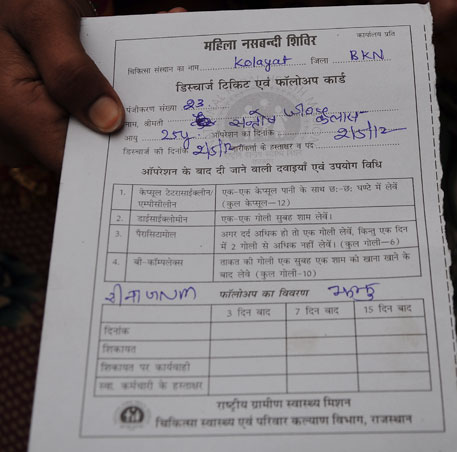 ASHAs may end up persuading women in their early 20s to go under the knife in hospitals that do not have running water, beds or adequate equipment to conduct operations. Under such circumstances, chances of contracting infections like HIV/AIDS and septicaemia are high. Of course, no one will be penalised if a few women die in the process.

NGOs accuse the government of being class-biased in their approach to family planning. “If an urban Indian woman wants to get sterilised, she can go to a quality hospital and get it done for a price. A poor woman in a remote village does not have that luxury,” says A R Nanda, former secretary in the department of family planning under the Union health ministry. He now gives consultation to NGOs working in the family planning sector. He was pivotal in framing the National Population Policy of 2000. “The government will never dare to offer women living in urban areas the kind of family planning services that are being given to rural women. This is pure discrimination,” he says.

During the family planning summit organised by the Bill and Melinda Gates Foundation on July 11, India’s senior bureaucrats made politically correct statements while sharing the stage with government officials of the United Kingdom and the US. They spoke about having “country-led” family planning programmes to ensure “cultural acceptance” and to meet specific “social needs”. But the country’s figures for population control measures are dismal.

Of the 56.3 per cent of the Indian population that uses contraception, 37.3 per cent—the highest share—is accounted for by women who opt for sterilisation. NGOs that work on family planning say the new scheme of NRHM may push ASHAs to adopt coercive methods and force pregnant women to undergo abortion just so that spacing between two children is maintained.

In a society where people pine for sons and women have little control over their reproductive rights, abortion can have a devastating impact on the country’s sex ratio. Technology to detect the gender of the child is easily available in every nook and cranny of the country. So, if it’s only two children a couple can have, they better be boys.

No other country in the world depends so heavily on this invasive method of contraception. In Malawi, which has the second highest maternal mortality rate in Africa, the share of female sterilisation under family planning methods is 10 per cent. In India, male participation in sterilisation is as low as one per cent, defining a clear gender biased approach in bringing down the population. 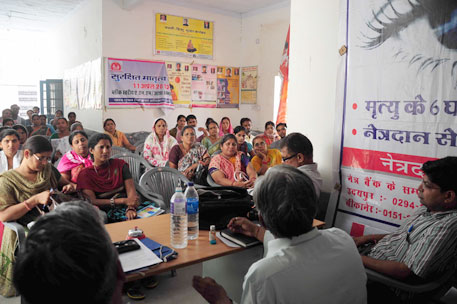 What’s more, the government does not even have records of how many women have died because of sterilisation. When a Delhi-based non-profit, Centre for Health and Social Justice, tried to get the data through Right To Information applications, the ministry replied that it was “not available”. The non-profit then collected data from health insurance companies that give claims in case of sterilisation failure, complications after surgery and death. It found that in 2008-09, 3,242 such claims were made in 27 states. Of this, 967 claims have not been settled and 423 claims were rejected on grounds like “the claim is out of policy period” or “the woman was pregnant before the surgery”. As many as 158 women died in that one year because of surgeries for sterilisation.

In no country or culture is it acceptable that a woman loses her life because of using a contraception method. Neither is sterilisation a social need in India. Then why the rush to bring women to the operation table?

According to the 2011 census, India’s population growth in the last decade has been the lowest in the past 50 years. One-fourth of India’s 1.2-billion population is young. So the country’s population will continue to grow before it stabilises. Sterilising women will not help lower India’s population growth rate. What may help is shifting the focus of family planning programmes towards ending child marriage so that early pregnancies are averted. Providing effective spacing methods to couples so that they can plan their family may also help. But giving women their health and reproductive rights is not the priority for policy makers. Their only concern is not allowing India’s population exceed that of China.