Why waste a chance?

Something's changing in urban India. Cities are now being redesigned to fend for themselves, become 'viable' entities on the balance sheet. Every bit of infrastructure and service is being packaged as an investment opportunity. It's called urban entrepreneurism. Goodbye government, hello markets.

In this heady new world, waste occupies an important position, not merely because of its physical attributes but because of services required to manage it. There is a shifting understanding of waste as the new wealth. The idea of wealth from waste has been popular since the late 1980s. Now, bolstered by public interest litigation, there is a paradigm shift towards capital-intensive, large-scale privatization of solid waste management services. Municipalities sub-contract agencies to help set up privatization via a global bid. Typically, this is for collection and transportation of waste, sometimes collection from the doorstep.A few contractors get advertising rights to dhalaos -- neighbourhood disposal points. And end-point technologies depend on private players. A recent study by the Federation of Indian Chambers of Commerce and Industry in 25 Indian cities found that only two cities hadn't privatized some part of the formal waste system. The conclusion? "Huge scope for privatization in solid waste management." 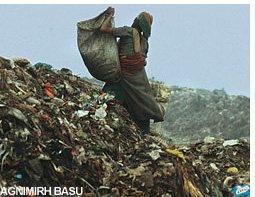 But waste has always been managed and recycled by indigenous private players in India. Almost 1 per cent of urban populations are estimated to be involved in recycling. Wastepickers, itinerant buyers, junk dealers--these are our indigenous waste handlers. For them, waste is lucrative because it generates the next meal. Theirs is an investment of time, labour and acquired skills. The cost is their health.

They have few opportunities to leap into the formal sector and no social security. With low capital investments and no subsidies, the informal sector recycles between 9- 59 per cent of the total waste generated in urban India, depending on the city or town you are looking at.

These private players are excluded from the grand plans for waste management; perhaps because they are embedded in everyday life, perhaps because the fruit of their low capital investment is poorly appreciated. Casting such smaller players aside, policymakers imagine privatization as a capital-intensive investment for well-networked entities. Most contracts in India seek investment capacity, fleet ownership and similar large assets. Few seek proven efforts in the field. To become a new-age waste contractor, you don't need to know about waste. But being rich is essential.

Privatization's only occasional concession is a patronizing one: through hiring 'bin guides'. These involve a single person, sometimes a wastepicker, to the exclusion of all others. They keep the disposal points clean. This creates a new 'professional' individual outside indigenous systems, rupturing collective earning capacity for the poor. Women, for example, lose the flexibility to look after homes or pick or sort waste at convenient times, unable to contribute to family income.

Private contractors, owners of the recyclable waste, sell it all to the biggest dealers, if not factories. A long chain that includes hundreds of small junk dealers breaks. It is the fencing of urban common property resources.

The informal sector can't compete in this unequal playing field. Being denied resources to independently trade materials is a deep demotion. Wastepickers and small scrap dealers collaborate and compete through unwritten codes of conduct, kinship and community or peer pressure, resulting in one of the highest rates of recycling in the world.

A popular understanding of privatization is that it results in municipal savings. The World Bank, in its 2006 report, Improving Management of Municipal Solid Waste in India : Overview and Challenges, agrees that there is a 20-40 per cent reduction. However, it says, "One of the reasons for the relatively lower costs incurred by the contractor is quoted as differential wages, particularly when private contractors tend to pay lower than minimum wages to their sanitary workers." Savings arise from depriving workers, a fact borne out empirically even in Delhi.

In a country with rapid urbanization and 300 million people earning under a dollar a day, dislocating and disenfranchising the poor their jobs is against public interest. A paper in the 2007 summer edition of the Stanford Social Innovation Review emphasizes that stable jobs are the best way out of poverty. Author Aneel Karnani says, "If societies are serious about helping the poorest of the poor, they should stop investing in microcredit and start supporting large labour-intensive industries." The new privatization of waste works in the opposite direction.

But the poor aren't the only losers. The rest of the city loses too, we've recently seen. Last year, the German bilateral agency gtz and the Collaborative Working Group on Solid Waste Management (cwg) asked a question: what is the economics of informal sector recycling? Their results, culled from six developing world cities across the continents, are lessons for us.

If the informal sector went away, the costs of recycling would rise dramatically. In the Philippines, it costs the informal sector 17 euros per tonne for waste recycling. For the same work, the formal sector must spend 81 euros. This matters to both the city and citizens, because they will finally finance these rising costs.

Delhi is a good example of poor waste policy and privatization. The terms of the contract, made by the Infrastructure Development Finance Corporation for the Municipal Council of Delhi, only perfunctorily mentions wastepickers, ignores several other informal recyclers, reduces segregation standards and worsens work conditions. The recyclables also belong to the private operators. In Delhi, the private operators must segregate only 20 per cent in the final and eighth year of operations--a lowering of standards from the over 90 per cent by wastepickers. Consequently, many low-value materials are incentivized to be landfilled, morphing from resources to pollutants.

Clashes become inevitable. Documentation by Chintan Environ-mental Research and Action Group, in New Delhi's R K Puram area, showed that the contractors often intimidate, abuse, harass and even beat wastepickers who attempt to 'break into' a newly privatized space to carry out their earlier work. Wastepickers collecting waste from the doorstep were disallowed from entering bins for secondary segregation. They took all the waste home, impacting the health of entire communities. Some were stopped from disposing off waste in dhalaos, if they removed the recyclables from it.

India isn't unique in its rich informal recycling sector. Other countries have this too, and they've preserved the system well. Many of them have been able to make good inclusive policy. In Argentina, a zero-waste decree makes it mandatory for private waste handlers to provide facilities for the informal sector to segregate and store recyclable waste. In Rosario, wastepickers have recycling infrastructure and the training to use it. In the Philippines, junk dealers are licensed and performance standards created. Wastepickers at the Smokey Mountain are helped to work safely.

In Colombia, In 2003, under Decree 1713, part 1505, wastepickers are included in solid waste management plans. This was backed by a strong cooperative movement and federation.

Given how Indian policymakers obsess with being world class, these are examples to learn from. If there is one guiding principle that municipal officials must remember, it is this: It is cost effective to encourage the informal sector to work. Recycling more than pays for itself, in this sector. If the informal sector had priority access to all recyclable waste, an important first step would have been taken. This would require backstopping in the form of space for secondary segregation and storage. The non-motorized transport of this sector--cycle rickshaws, non-polluting and green--should be accommodated too.

But this is not enough. Future privatization must take the form of small contracts of under Rs 20 lakh, where micro-enterprises can compete. Current contracts must be stopped, for they are deleterious to India's own stated vision for progress and the Millennium Development Goals. And only inert, non-recyclable waste should be in landfills. Everything else must be recycled, composted or bio-methanated locally. This can save on transportation, reduce greenhouse gas emissions from landfills, and stop the poor from becoming poorer. Labour is one of the main skills of the urban poor. Combined with innovation and embedded in good policies, it offers them hope. Otherwise, they are doomed to remain poor, with huge social and economic costs for everyone.

Urbanization rates forecast for India means that our towns and cities will simultaneously house more poor and generate more waste. They can be the sites for innovative policy that addresses both environmental sustainability and urban poverty. Waste provides an invaluable opportunity to do this. Why ignore it, then?