A death sentence for protecting her babies 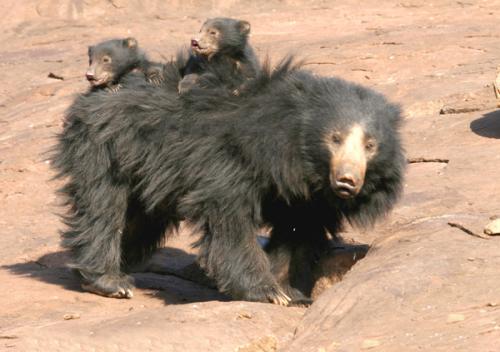 She was fiercely protective of her babies, willing to go to any extent to ensure their safety. When strangers invaded her home threatening the safety of her offspring, she retaliated, fighting aggressively to injure the invaders when she perceived a threat to herself and her babies, only to be riddled with bullets and killed in cold blood. A protective mother gives up her life to save her cubs.

The above is a true life incident that describes the fate of an endangered sloth bear in the Balaram Ambaji Wildlife Santuary in Gujarat's Banaskantha. The brazen killing of the female sloth bear on the outskirts of the wildlife sanctuary has sparked severe criticism from wildlife experts and conservationists, questioning the country’s stand on wildlife protection and conservation.

Believed to have given birth to cubs recently, the female bear in an attempt to protect her cubs attacked two local shepherds who ventured too close to the location where her cubs were hiding. Similarly, a forest official on patrol duty was also attacked by the bear, perhaps, when he went too close for comfort to investigate the above attacks.

Wild animals like human beings are fiercely protective of their offspring. It is common knowledge and understood jungle law and animal behavior documented for centuries that it is advisable to give wild animals like sloth bears, tigers, elephants, leopards a wide berth in the forest, and more so especially when they have their babies near them.

Normally local farmers, cattle grazers, shepherds are extremely familiar with their surroundings and know how to avoid tracks and routes followed by these wild animals while also advising others to do the same. Regretfully, people can sometimes be ignorant and somewhat overconfident thereby leading to human wildlife conflict scenarios like the one described above.

In this particular case, the victims of the human-bear conflict sadly succumbed to the attacks and in retaliation, the families of the victims wanted nothing less than the death sentence for the mother bear! Yielding to pressure from the families of the people who were mauled by the sloth bear, the Chief Wildlife Warden of Gujarat issued a kill order on the bear, despite persistent pleas from wildlife conservationists to spare the bear but instead relocate the animal with her cubs to a safer location.

On receiving word of this incident, Wildlife SOS, the non-profit that I work for, dispatched an expert team of veterinarians to assist the Forest Department to help capture the bear alive using tranquilising equipment without putting any more human lives at risk. Options available at the time were to capture the bear with her cubs and relocate them to a safer area or shift them to captivity, both of which were humane options that would ensure safety for the people while protecting endangered wildlife in accordance with the laws of India i.e. Wildlife Protection Act 1972.

The expert team from Wildlife SOS were boarding the plane for Ahmedabad when they received a call that sunk their hopes. An officer from the field confirmed the police had opened fire, pumping nearly 67 rounds from AK-47 rifles to dispatch the female bear! Travel at this stage to Gujarat was futile and the team aborted their travel to Gujarat.

While the killing of this mother bear in cold blood was horrific enough, shocking the entire community of foresters and wildlife conservationists, the police officials posing with the lifeless carcass of the bear with their weapons showing off their trophy kill was quite unpalatable.

This incident reflects the lack of understanding of wild animal behavior and the scope for improvement in training required for wild animal tranquilisation and management on the part of the concerned authorities. Human-Bear Conflict (HBC) is a growing concern and one that requires attention to help mitigate the conflict that is spiraling out of control as urban concrete jungles are rapidly replacing forest tracts and bear habitat across India.

The solution in such cases is to work with the communities and helping them avoid areas during bear cub season and not killing female bears for protecting their cubs. An incident such as this goes to indicate the high level of intolerance towards our wildlife and is a matter of great concern if we want to preserve our biodiversity.

The Sloth Bear is listed under Schedule I of the Wildlife Protection Act, 1972 and gunning down a problematic bear is certainly the last measure that should be considered as there are clear provisions in the law which specifically state that any wild animal specified in Schedule 1 that has become dangerous should only be tranquilised, captured, trans-located and rehabilitated elsewhere and even while undertaking such measures,steps need to be taken to cause only minimum trauma to such an animal. Only when such measures fail, hunting is permitted as a last resort subject to written permission by the Chief Wildlife Warden. It is hoped that the death of this bear serves as a lesson provoking us to think again whether we would apply the same yardstick to humans—A death sentence for protecting your babies!