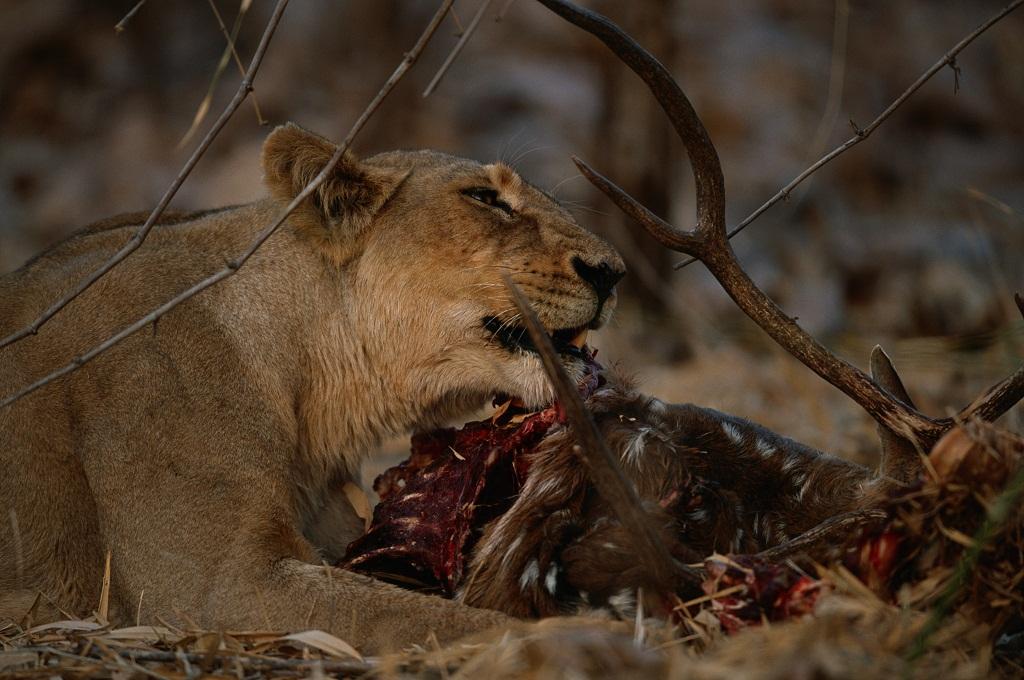 A lioness feasts on a Chital stag in Gir Credit: Getty Images

Recently, 23 lions in the Gir National Park died within 20 days, and three surviving members of the pride are reported to be battling for their lives. The causes of the deaths include a viral infection that usually causes canine distemper, regarded as a dog's disease, and a protozoal infection that's linked to the tick-borne disease babesiosis in cattle such as cows and buffaloes. The deaths represent the increasing prevalence and dangers of cross-species disease transmission, which is emerging as a new threat to wildlife and humans. And for the most part, we have only ourselves to blame.

Poor breeding practices to create so-called "pedigree dogs" for sale, who are often prone to illness, and the failure of local administrations to sterilise and vaccinate stray dogs—even though it is a legal requirement—are contributing to an increasing number of cases of canine distemper in dogs. These same factors may be causing lions, which have been in close contact with dogs, to become sick. A recent study in Guwahati, Assam, reveals that34.73 per cent of stray dogs there are suffering from the canine distemper virus.

It is estimated that nearly 80 per cent of the world's domesticated cattle population, bred specifically for their flesh and milk, are at risk of contracting tick-borne diseases, particularly babesiosis. Indian cattle have greater tick resistance than foreign or cross-bred cattle, but the latter are becoming favourites of the dairy industry, as they're bred to produce unnatural quantities of milk. However, it is not just dairy farmers—states are doing it, too. Animal husbandry departments promote cross-breeding, contributing significantly to the tick-borne disease crisis in cattle. And cattle graze in close proximity to lions in dairy-loving Gujarat.

There are also numerous disturbing reports about illegal lion shows in Gir, where live buffaloes, that are potentially diseased, are offered as bait to lions in order to guarantee sightings for tourists and demonstrate how lions "hunt" and eat their prey "naturally". Forest officials are reported to be in collusion with locals to set up illegal "lion shows" in which observers watch the pride at close quarters, often attracting the big cats to the outskirts of the sanctuary. Recently, seven people were arrested for organising an illegal lion show, in which they offered chicken meat to lure lions. And many of the lions living around Gir Forest find potentially tick-infested domesticated cattle to eat for dinner. Infected dogs on the edge of the forest may also eat the leftover meals of the lions, creating a risk of disease transmission if the lions feed on it again.

Diseases found in animals can be zoonotic, too—that is, transmissible to humans. The rearing of animals for their flesh, eggs, and dairy has played a significant role in the spread of such diseases in our country and around the world. India has reported several outbreaks of avian influenza—a zoonotic disease that can often be found on farms where chickens are raised for their flesh or eggs—which can be deadly for humans. In the last few years, all the chickens on infected farms were killed. More than 800 people in India have died from the swine flu virus, which, as the name suggests, is linked to pigs. And a couple of years ago, more than 80 animals found on a dairy farm in the Palakkad district of Kerala were infected with brucellosis and many cows on a private farm in the Kolar district of Karnataka tested positive, too. Four people in Palakkad and five in the Bagalkot district of Karnataka, including veterinary professionals, were reported to have caught the potentially deadly disease.

And alarmingly, a 2018 study indicates that there may be an estimated 21.8 million cattle used for meat and milk in India affected with bovine tuberculosis (BTB). Experts at the Indian Veterinary Research Institute believe that the prevalence of infection is as high as 15 per cent in buffaloes and cows in the country and that approximately 9 per cent of all TB infections are transmitted from other animals to humans, with the highest percentage of cases in children. BTB is spread to humans primarily by the ingestion of infected milk. A Central India Institute of Medical Sciences study reveals that up to 12.6 per cent of human TB patients are, in fact, suffering from BTB.

In recent decades, many localities have been identified where BTB has been detected infecting wildlife, further limiting progress towards eradicating the disease. A 2018 evaluation of captive elephants used for tourist rides in Jaipur indicates that 10 per cent of the population are reactive to TB, posing a potential threat to both tourists and the general public. Another study of captive elephants in southern India, including those used by temples, revealed a high prevalence of asymptomatic Mycobacterium tuberculosis infection, for which humans are considered the primary host. The evidence indicates the possibility of this type of TB infection spreading from humans to animals (that is, reverse zoonosis), for instance in situations in which elephants are forced to "bless" humans.

Bacteria, viruses, protozoa, and other infectious organisms that are deadly to one species of animal can evolve quickly to infect another. Across-species infection can originate on farms or markets, where the often filthy conditions foster mixtures of pathogens, giving them opportunities to swap genes and adapt so that they can attack what were previously foreign hosts. According to the World Organisation for Animal Health, an estimated 60 per cent of human pathogens originated in animals and five new human diseases emerge each year.

While we should take all possible measures to protect the lions of Gir, it is also important to examine the root causes of and contributing factors to the problem, such as the often unhygienic and crowded rearing of animals for meat and milk, dog-breeding policies, the abuse of animals for tourism, and others. As individuals, we can help by supporting dog-sterilisation efforts, refusing to buy from pet stores and breeders, refusing to patronise spectacles such as elephant rides, and going vegan.