If the tradition has to be kept alive in spirit, then its proponents must muster courage to walk the talk 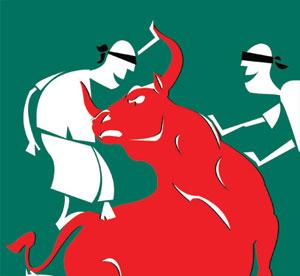 Now that the dust has settled on Marina beach, where young protesters had camped to demand that the ban on jallikattu—a traditional sport of bull jostling—be lifted, let’s discuss the larger and more serious issue of culture, tradition and their practice in the modern world. For a practising environmentalist (like me), this is a contentious and highly polarising issue. There is no doubt that traditional cultures had empathy with ecology—people had learnt to live with nature, optimise its resources and rationalise its use during scarcity. This “sustainable use” was woven into rituals, practices and beliefs, and became part of cultures. But times change, and so do the approaches and sensibilities of society. How do traditions live on? Should they? Or, should the focus be on the reasons why we did what we did, and not on the ritual that has only become symbolic now?

I ask this when the country is learning (and definitely mispronouncing) a new word, jallikattu. The Tamils practise this tradition and say it is different from the bull-fighting of Spain. They do not kill the bull, only play with it by removing bundles of gold and money tied to its horns. The skill is tested in how the man—it’s always a man—removes the money and, in the process, tames the raging bull. This is why it is a sport, say animal rights activists, who had successfully taken the issue to the Union government. In 2011, the then environment minister, Jairam Ramesh, agreed to include “bull” in the list of animals that were banned for use in training or exhibition under the Prevention of Cruelty to Animals (PCA) Act, 1960. His successor, Prakash Javadekar, wanted to remove “bulls” from the list but the Supreme Court intervened. In May 2014, the court ruled that jallikattu, bull-racing and other such activities were indeed cruel to animals and upheld the notification banning the “sport”.

But since then, each Pongal—the festival of harvest when jallikattu is organised—the rumble of dissension has been growing. The Union government has kept the fires burning by “promising” amendment to the PCA Act. This year, all hell broke loose as thousands of youth—not illiterate and media-ignored farmers—plugged into social media, spilled onto the beach in Chennai and roads in other cities of Tamil Nadu. The gathering was enough to push the state government to act. Overnight, it promulgated an ordinance and enacted it into a law to ensure that bulls are not barred from being used for rural sport. But the moot question remains—is this an ecologically important tradition or just blood sport?

Proponents say jallikattu is the only way to preserve the state’s traditional Kangayam species of bull. They say through this sport, the stud bull’s powers are demonstrated and it is selected for conservation. They go as far as saying that if the sport is banned, there will be no “value” in keeping the bull; it will be slaughtered and the ratio of cow to bull will further decline.

The question is whether this ecological purpose has been understood. The answer is a sad no. First, let’s look at the arguments made in the Supreme Court by the state government or even the Union government. The only reason to seek continuation of the sport has been “culture” or “tradition”, and the plea has been that cruelty is not inherent in the sport and can be regulated. The proponents have never ever articulated the ecological purpose of the sport as this would require substantiation.

Then look at the ground facts. Today, indigenous domestic animals across the country stand close to extinction. There is a compelling reason to argue that these species must be conserved, protected and bred. They are local and so, have the ability to cope with adverse ecological conditions. Today, Indian traditional cattle breeds are the basis of economic prosperity in other countries. Africa breeds our Sahiwal; Brazil our Nelore; even the American beef cattle comes from India’s Brahman. But we have taken fancy to foreign breeds like Jersey and Holstein Friesian. The 19th Livestock Census released in 2012 shows this decline. Between 2007 and 2012, there was a 19 per cent reduction in indigenous male cattle (bulls) and a parallel 20 per cent increase in exotic breeds of male and female cattle. When compared to the previous census in 2003, the loss is 65 per cent in indigenous milch cattle. The case is the same in Tamil Nadu. So, it would be fair to say there is absolutely no evidence to show that jallikattu has aided in the conservation of indigenous breeds, other than saying that the species that could have gone extinct is surviving by the skin of its horns.

This is not to argue against jallikattu, but to argue that if the tradition has to be kept alive in spirit, then its proponents must muster courage to walk the talk. Much more needs to be done to protect and ensure the continuation and use of indigenous breeds, which are vital for the country’s livestock economy. This is where the catch lies. This is the horn that matters.