How to save a coastal dune 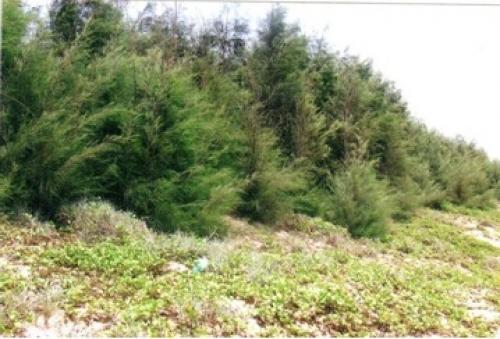 The district of Kanyakumari in Tamil Nadu is situated at the southernmost tip of the Indian Subcontinent, surrounded by the Bay of Bengal on the east, Indian Ocean on the south and the Arabian Sea on the west. It is famous as a pilgrimage and tourism spot.

In the district, Rajakkamangalam beach has the Arabian Sea on its west and abuts the village of Pannaiyoor, in the Agastheeswaram taluk, on its east. There is a sand dune formed naturally on the shore. Pannaiyoor owes its very existence to this coastal sand dune. The village has been well protected from any kind of natural disaster because of it.

This is because coastal sand dunes act as a natural barrier against wind and waves and protect inland areas from damage due to storms, cyclones and tsunamis. Sand dunes are also an important ecosystem and support highly specialised plants and rare and endangered animal species. Naturally occurring tree species like Calophyllum inophyllum, Borassus flabellifer and Pandanus fascicularis are found on coastal dunes in addition to herbs like Acalypha indica, Aloe vera, Argemone maxicana, Calotropis gigantea, Leucas aspera, Gisekia pharnaceoides, Ipomoea pescaprae and Tephrosia purpurea. The dunes are stabilised by the vegetation that grows on them, binding the sand particles.

Sand dunes up to a height of about 20 metres are found along the Tirunelveli, Kanyakumari and Kancheepuram coasts. Important sand dunes in Tamil Nadu are found in Tiruchendur, Manapad, Ovari and Idinthakarai, Tuticorin district. In Kanyakumari district, they are found in Kanyakumari, Chothavilai, Pallamthurai, Sankuthurai, Periakadu, Chinnavilai and Rajakkamangalam.

However, in spite of being very important for the survival of Pannaiyoor, the dune at Rajakkamangalam was about to be obliterated. The Tamil Nadu Coastal Zone Management Authority, in its recommendation dated June 29, 2010, called for the development of a fishing harbour in Agastheeswaram taluk. According to the recommendation, the project site was in Coastal Regulation Zone (CRZ)-I (ii) and CRZ-III. Based on the recommendation, the proposal was considered by the Expert Appraisal Committee and recommended for grant of CRZ clearance with certain conditions. Accordingly, on July 18, 2011, the Union Ministry of Environment, Forest and Climate Change (MoEF&CC) granted CRZ clearance to M/S Rajakkamangalam Thurai Fishing Harbour Pvt Ltd for the development of the fishing harbour.

On hearing that the path had been cleared for the process of establishing a private harbour in their vicinity, the residents of Pannaiyoor worried that any damage caused to the natural sand dune might bring a catastrophe upon the entire village. They tried their level best to stall the project through the Citizens Welfare Trust formed in the village as their very survival was at stake. But they were made to run from pillar to post as they did not have either money or any other influence. When it was confirmed that order had been issued in favour of the private fishing harbour, they had no other alternative except to knock on the door of the highest authority.

On the representation from the Pannaiyoor Region Citizens Welfare Trust and the Conservation of Nature Trust alleging the project was in the sand dune area, a site inspection was conducted by the Additional Principal Chief Conservator of Forests and the Scientist ‘F’ Regional Office, MoEF&CC, Chennai on January 17, 2015. The site inspection revealed that the project area had sand dunes and hatcheries of sea turtles. But as per the 2011 CRZ Notification, the sand dunes are classified as CRZ-I (B) where most activities are prohibited except some like laying of conveying system and projects relating to the Department of Atomic Energy.

On receipt of the inspection report, the MoEF&CC understood that the recommendation of the state government authorities allowing the construction of a private harbour lacked correctness with respect to the presence of sand dunes at the project site. The Union Government, exercising the power conferred on the Ministry under Section 5 of the Environment (Protection) Act, 1986, cancelled the CRZ clearance and thus the valuable sand dune at Rajakkamangalam was saved.