Of 'man-eating tigers' and ‘tiger-eating men' 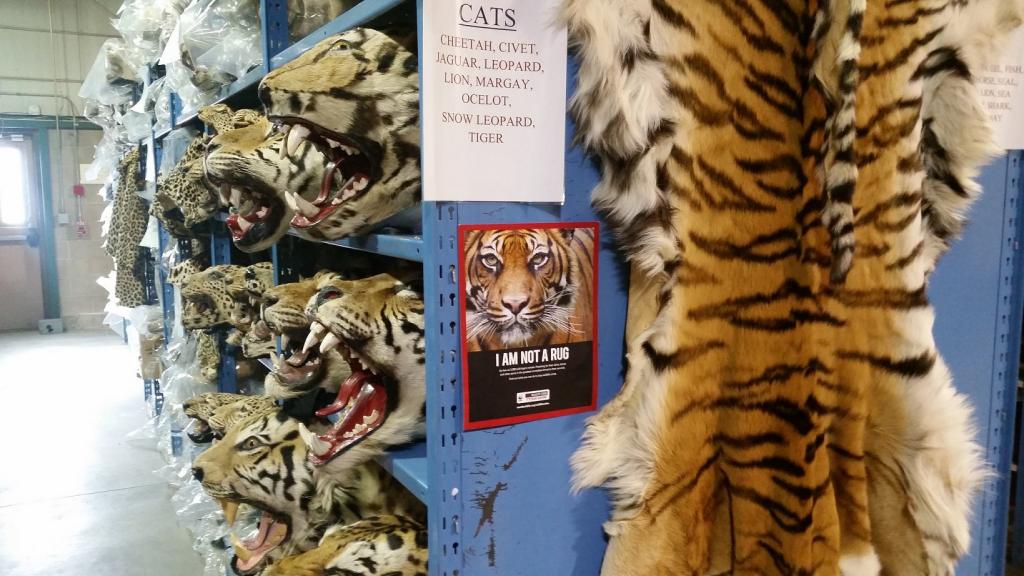 Most of the poached tigers and leopards find their ways to China every year through clandestine routes Credit: USFWS Mountain-Prairie / Flicker

Jim Corbett, one of my favourite ‘authors’ (hunters are not my favourites anymore), admired the wild tigers of India as “a large-hearted gentleman with boundless courage”, and urged India’s people to conserve “the finest of her fauna”. He is best known for hunting man-eating tigers and leopards in Kumaon and Garhwal Himalayas during the British era and has written two of the world classics. He is also known as one of few British pioneers who supported conservation of Indian wildlife in its natural habitats. The first national park of India–Corbett National Park in Uttarakhand—is named after him. On leopards, he wrote, “Those who have never seen a leopard under favourable conditions in his natural surroundings can have no conception of the grace of movement, and beauty of colouring, of this the most graceful and the most beautiful of all animals in our Indian jungles. Nor are his attractions limited to outward appearances, for pound for pound, his strength is second to none, and in courage he lacks nothing.”

About man-eating tigers, Corbett had said, “It is a tiger that has been compelled through stress of circumstances beyond its control to adopt a diet alien to it. The stress is, in nine cases out of ten, wounds, and in the tenth case, old age. Human beings are not natural prey of tigers, and it is only when tigers have been incapacitated through wounds or old age that, in order to survive, they are compelled to take to a diet of human flesh.”

A mature tiger usually makes one large kill every week. For India's estimated 2,226-odd tigers, that adds up to more than 100,000 kills in a year. If humans were part of a tiger's natural diet, and since there are enough people everywhere in India, a good number of these kills would be humans, which is not the case.

You can walk miles through a forest abundant with tigers and leopards, without seeing even tail of a tiger, leave alone getting killed by one. The best of the wildlife experts have spent days and weeks in a tiger-rich landscape without seeing a tiger (I know few of them). Even if you are surrounded by hundreds tigers and leopards in a jungle, there are lesser chances of being killed by these big cats than the chances of you being killed on a city road or on an airplane flight. However, declaring these animals as man-eaters and later hunting them down invites frequent fanfare, covered well by media.

Instances of man-eating tigers and leopards are not new to Uttarakhand and hiring private hunters to kill such animals has been a usual practice (including by Jim Corbett in pre-independence era). Hunting of wildlife in independent India is prohibited under the Wild Life (Protection) Act, 1972, including these big cats which are accorded highest protection under the Act. But the recent order of Uttarakhand High Court, which has reignited the debate on human-wildlife conflicts in India, says, "No wild animals, including tigers, leopards and panthers, shall be declared man-eater/rouge and killed in entire state of Uttarakhand. Dead body of wild animal shall not be displayed in print media, electronic media, including television. Henceforth, the wild animal who poses threat to human life should be captured alive by using tranquiliser gun in the presence of Veterinary Doctor. Captured wild animal shall be thereafter released in nearby forest/jungle or alternatively, can be kept in zoo temporarily and thereafter, be released in its own habitat."

However, Wild Life (Protection) Act, 1972 states that "Chief Wildlife Warden of the state may, if he is satisfied that any wild animal specified in Schedule I has become dangerous to human life or is so disabled or diseased as to be beyond recovery, by order in writing and stating the reasons therefore, permit any person to hunt such animal or cause such animal to be hunted." But this power was limited later by insertion of Act 16 of 2003, section 9 (effective from April 1, 2003) which said, “no wild animal shall be ordered to be killed unless the Chief Wildlife Warden is convinced that such animal cannot be captured, tranquilised or translocated”. The high court's decision to put a blanket ban on hunting permissions by Chief Wildlife Warden seems to be a contravention of the Wild Life (Protection) Act, 1972. Considering the past few instances where tigers and leopards have killed many human beings if they adopt human diet regularly, such order raises questions and naturally invites ire of many. Nevertheless, the High Court’s Order adds that “The decision, whether wild animal causes threat to life of human being, shall be taken at the highest level by a committee comprising Principal Secretary, Forest and Principal Chief Conservator of Forest. No private hunter shall be engaged by the state government to kill wild animals.”

According to the order, since 2011, some 400 leopards have been killed, including 45 in 2016. Wildlife officials have admitted time and again that they have to budge under the pressure of local politicians to declare tigers and leopards as man-eaters in cases of human-animal conflict. The wildlife officials often issue killing order for big cats through phone messages or calls and do not even keep the updated record to avoid RTI queries, flouting the regulations laid down by National Tiger Conservation Authority and Union environment ministry in this regard.

Due to shrinking and fragmented wildlife habitats, declining prey base for predators and human encroachments in forest areas, the man-animal conflicts have shot up over past few years. Human-wildlife conflict is a very complex and sensitive problem in countries like India where there are more people than available lands (even lesser forests) to support them. With limited capacity of forest department and burgeoning human population around Protected Areas, government has been finding it tough to solve this problem.

Another root cause of rising man-animal conflicts in India is degrading forests which are unable to meet human and wildlife demands. Government’s own estimates reveal that growing stock (volume of all living trees in a given area) of Indian forests has seen a decline over past few decades despite government’s claims of increasing forest cover. This means that forests of India are facing chronic disturbance from people as well as industries and are not producing enough to sustain wildlife or native people. As a result, wild residents are finding their ways out to surrounding villages and cities in search of food or habitat. For instance, streets of Gujarat are witnessing lions taking a stroll while cities like Bengaluru and Mumbai are reporting leopard sightings. Herbivores like elephants, wild boars and nilgai are more frequent wanderers, many of them now declared 'vermin' by various states in India.

In view of the human-dominated society that we are, big cats stand no chance of winning the game when they come in conflict with human beings. Considering the fact that they hold the keystone position in the forest ecosystems of India and existing poaching pressures leading to their declining population, any decision to kill these threatened species must be taken by forest authorities with extreme care. Also, criteria of when should a tiger/leopard can be declared as ‘man-eater’ (many human casualties are accidents rather than habits of these felines) must be clearly defined by the government (and their scientists) to avoid hunting decisions on whims and fancies of wildlife officers.

An animal, which can be killed by a gun, can also be captured by using tranquilising gun and rehabilitated back to its natural habitat or kept in a zoo (if it continues to pose man-eating threat), which will solve the problem without killing it. With these options available, hunting/killing of tiger, leopard and elephant must be practiced as a last resort.

The Uttarakhand High Court order may put an end to unscrupulous big cat hunting in the state on pretexts of them being perceived as a 'man-eater', but it is only a temporary measure which does not address the bigger problem of rising man-animal conflicts in India. Government must enhance its efforts for solving the above-mentioned causes of such conflicts so that human being and wildlife can live in harmony in future.

At the start of 20th century, about 100,000 wild tigers were found on earth, number of which has now reduced to less than 3,890 (estimated recently, but doubted by many as an overestimate). Out of this, India has about 2,226.

China, with its uncanny traditional animal-based medicine system, continues to be a major threat to last remaining tigers and other wild animals of the world. Most of the poached tigers, leopards and other wild animals of India find their ways to China every year through clandestine routes. Not enough to satiate big Chinese appetite for wildlife, there are thought to be between 5,000 and 6,000 tigers (in about 200 tiger-farms) in China today, mostly born in captivity and kept in appalling conditions before being slaughtered like chickens. Their bones are steeped in alcohol to make tiger bone wine, their meat sold, and their skins turned into rugs for members of China’s wealthy elite.

If hunting and wildlife trade were not banned in India, this country, too, would have lost much of its tigers and other wildlife decades ago, as elites here too have been famous for their hunting-instincts; proven by historic hunting accounts and the fact that they continue to hunt wildlife in Africa and elsewhere, a practice banned domestically.

Tigers are not chickens

We have over 1.25 billion people now in India, but only 2,226 tigers and 12,000-14,000 leopards (each of which may be an overestimate) left in less than five per cent of India’s land area protected by law as their natural habitats. Out of these, about 100 tigers have been killed in 2016 alone (higher than previous years) as per government’s estimates. The causes of a high percentage of these tiger deaths remain unexplained as many are poisoned or killed secretly by locals to save their cattle and never reported to authorities.

Both sides of this continuing man-animal fight have valid and strong reasons to defend themselves. Therefore, I am refraining myself here from passing any judgments on ‘man-eating tigers’ or ‘tiger-eating men’, but I will conclude by saying that every decision to kill an animal must be made with due care, science and compassion towards both wildlife as well as human beings. I believe that Uttarakhand High Court has taken a decision in the same spirit.

Lastly, I support the Uttarakhand High Court order of ban on displaying dead bodies of wild animals in print/electronic media as we should cherish the wildlife alive, not dead (unlike China). Tigers, leopards and elephants are after all not chickens (the poor birds not considered living beings anymore), nor are we—the self-proclaimed greatest of all species, Homo sapiens.