Primate under threat: Why the slender loris needs a protected area in Tamil Nadu’s Dindigul

The insectivorous animal is a great help in eradicating harmful insects; but it is gravely threatened due to a number of factors 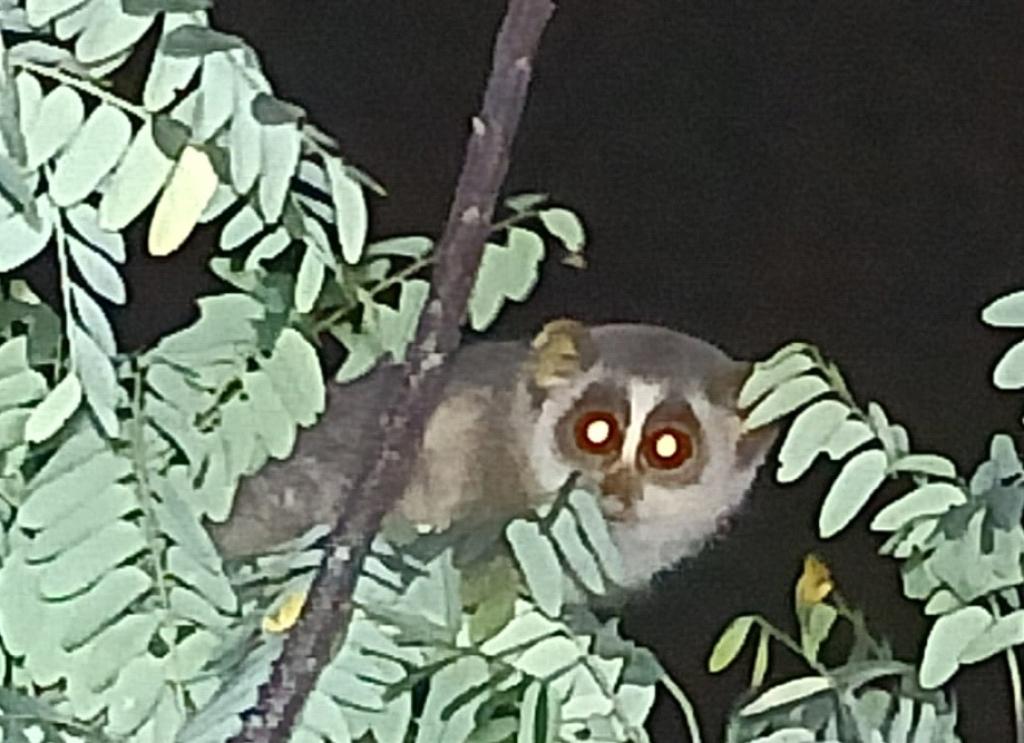 The slender loris is called ‘Thevangu’ in Tamil. Photo: Kumaresan

Scientists from the Salim Ali Centre for Ornithology and Natural History (SACON) in Coimbatore recently carried out a survey of slender loris populations in Tamil Nadu’s Dindigul forest division.

The gray slender loris (Loris lydekkerianus) belongs to the family Loridae. It is a species of primate.

The scientists extrapolated and predicted the density and population size of the animals in the four RFs based on the sightings.

These figures indicate that these RFs are appropriate habitat for the species. They can be used to conserve the animals. And with good reason.

The slender loris has got a lean and lanky appearance, with longer and slender limbs, larger ears, pointed snout and eyes circled with black or dark brown. The fur is soft and woolly. The colour varies from dark grey to earthy brown.

Slender Loris generally inhabits dry and drought-prone areas of Dindigul district of Tamil Nadu. It is found in acacia and tamarind-dominated thorn and scrub forests near cultivated fields.

Of the six species of Lorisinae, the Loris lydekkerianus is found in and around the Ayyalur, Alagarkovil, Manapparai, Sirumalai and Kadavur areas in Tamil Nadu.

The slender loris is a nocturnal animal. It is also a slow-moving animal. It comes down into the bushes to feed and crosses open stretches of ground to enter isolated groves or to cross from one tree to another.

Generally, it sleeps by day, hiding among foliage or in a hole or crevice. It starts moving from its resting place by dusk.

Though it is insectivorous, it is fond of lantana berries also. It eats insects, dragonflies, lizards, eggs, small birds and tree frogs.

But the slender loris is in danger. It is considered endangered according to the International Union for the Conservation of Nature’s Red List of Threatened Species.

It is listed under Appendix II of the Convention on International Trade in Endangered Species of Wild Fauna and Flora.

The loris has become threatened mainly because of habitat loss. The disappearance of the acacia tree, a preferred tree species of the loris, hunting for the pet trade and for their meat, road kills, superstitious kills, traditional medicine and habitat fragmentation pose serious threats to this primate.

Earnest conservation efforts and research are the need of the hour for conserving this threatened species.

Which is why the SACON findings are important. The four RFs surveyed by the team are situated close to each other and are easy to manage. This makes them ideal for conservation purposes. These 4 RFs can be declared as a slender loris wildlife sanctuary.

However, there are challenges too.

Since the slender loris is insectivorous, it may move away from the RFs and into the nearby agricultural fields in search of prey species. Hence, at times, it may get killed by fast moving vehicles or by people outside the forest.

As the slender loris can’t jump or leap, it requires forest cover with canopy contiguity. It needs continuous canopy for comfortable moving.

In order to tighten protection, warning boards will have to be erected in vulnerable areas where the slender loris is sighted outside the forest.

People will have to be motivated by informing them about the importance and the ecological value of the animal in eradicating ants, black ants, toxic beetles and other harmful insects.

Once these are taken care of, the Tamil Nadu forest department can send a proposal for declaring the above mentioned RFs as a sanctuary for the slender loris.