Save these camels of Kutch

The Kharai is a unique breed of camel found only in Kutch, which feeds on mangroves. But salt-making industries operating in the area are threatening its food supply and existence 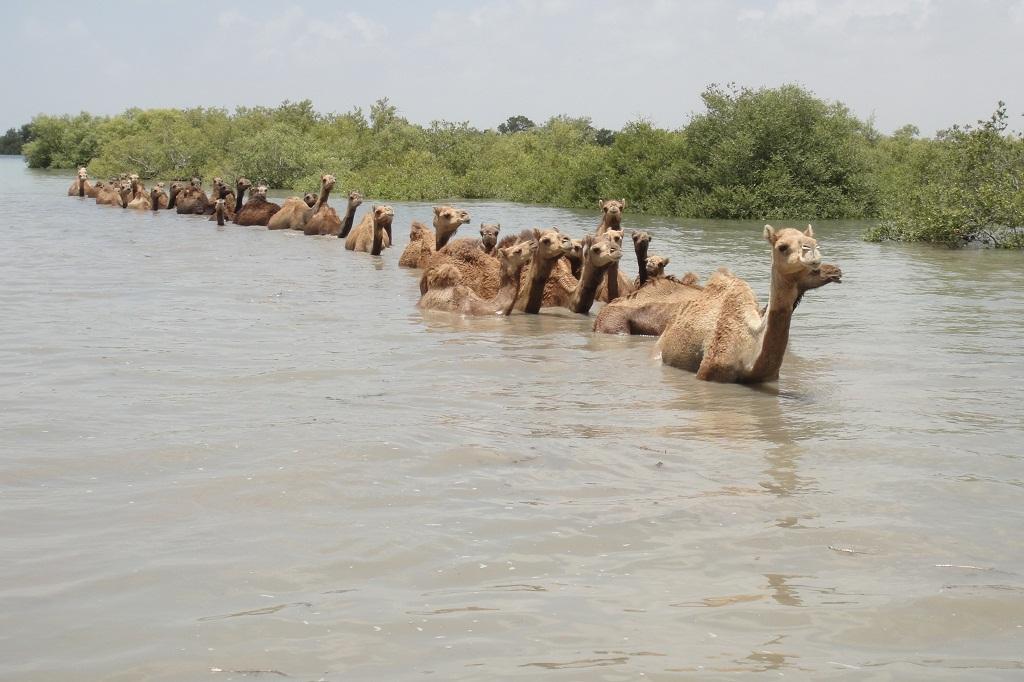 A herd of Kharai Camels crossing a stretch of water. Mangroves are seen in the background Credit: Mahesh Bhanani

It was January 2018. For over a month, a large fleet of Hitachi extraction machines and tractors illegally plundered more than 4 square kilometres of pristine mangrove forest by blocking creeks, leveling the ground, and making bunds. They created bunds by enclosing small portions of land to keep tidal water from coming in, so that the mangroves would slowly die off, and it would get easier for their machines to uproot them. They would have destroyed the entire mangrove forest if Adambhai had not raised an alarm and brought attention to this destruction.

Adambhai lives in the village of Wand in the taluka of Bhachau, about 50 km from the Deendayal port or Kandla, as it was known previously, in Gujarat’s Kutch district. His family has lived in the area for the past eight generations. Adambhai is a breeder of Kharai camels. These camels are unique. Why? Because they have the special ability to survive on both, dry land and in the sea. They swim in seawater and feed on saline plants and mangroves. The Kharai was recognised as a separate breed in 2015 by the Indian Council of Agricultural Research (ICAR).

Adambhai and 8 other breeders together own 350 Kharai camels. He is part of the Kutch Unth Ucherak Maldhari Sangathan (KUUMS), or Kutch Camel Breeders Association. The body has about 380 members, and they are pastoralists.

It was while he was grazing his camels that Adambhai saw the destruction wrought by the men in the Hitachis on the mangroves. And who were they? Employees of private companies who had been leased the land on which the mangroves stood, between Kandla and Surajbari, owned by Deendayal Port Trust. This was in violation of Coastal Regulation Zone (CRZ) Act, 2011. The private companies’ depredations were confirmed by an investigation carried out by a government committee set up by the Kutch district collector. It was again reconfirmed by a report prepared by the forest department later.

Following Adambhai’s blowing of the whistle, several concerned groups, organisations, environmentalists, and citizens came together from around Kutch on February 24, 2018, at the site of destruction to protest against the salt-making industries and in support of the communities that are going to suffer due to the loss of the mangroves. Coverage of the protest in the media ensured a temporary halt in the destruction. However, it soon began again.

It was then that the KUUMS got into the act. It hired a law firm in Delhi. It then filed a plea against the rampant destruction of the mangroves in the National Green Tribunal (NGT). “Incessant destruction activities have severely diminished the cover of sparse mangroves found at the said site, as well as destroyed the habitat of the indigenous Kharai camels, in addition to disrupting livelihoods of villagers dependent on these mangroves”, it read. One should also remember that mangroves are important breeding grounds for various faunal species and provide habitats to millions of zoo- and phytoplankton, which in turn become food for fish and many birds.

On March 8, the NGT issued notices to the Union Ministry of Environment, Forests and Climate Change, the Gujarat State Coastal Zone Management Authority (GCZMA) and the State Forest department and issued a stay order on all activity in the area, along with a joint inspection. On May 10, the court granted a week’s time to the Deendayal Port Trust to respond to the plea.

On August 1, the NGT ordered the Gujarat Pollution Control Board to reopen the tidal creeks in the area, which had been sealed by the salt companies so that sea water could reach the mangroves and prevent further damage. The next hearing in the matter is at the end of September.

For now, permanent damage to both, the mangroves and the Kharai camels has been prevented. But only for now. Camel milk has been recognised by FSSAI (Food Safety and Standards Authority of India) and AMUL for its immense therapeutic properties in degenerative diseases like autism, TB, diabetes and even some types of cancers; however, with the destruction of mangroves in Gujarat there are barely about 3,000 of these unique camels, that live in the mangroves, left in the country. The government of India has declared them “highly threatened” and has launched a massive conservation programme to increase Kharai numbers. However, along with the thousands of species that live in the mangroves, the Kharai too will perish without them.