Scientific management of mangroves is need of the hour

Mangroves are salt-tolerant vegetation that grows in intertidal regions of rivers and estuaries. They are referred to as ‘tidal forests’ and belong to the category of ‘tropical wetland rainforest ecosystem’.

Mangrove forests occupy around 2,00,000 square kilometres across the globe in tropical regions of 30 countries. India has a total mangrove cover of 4,482 sq km.

Mangroves are trees and shrub species that grow at the interface between land and sea in tropical and subtropical regions of the world, where the plants exist in conditions of salinity, tidal water flow and muddy soil.

The structural complexities of mangrove vegetation create unique environments which provide ecological niches for a wide variety of organisms. Mangroves serve as breeding, feeding and nursery grounds for most of the commercial fishes and crustaceans on which thousands of people depend for their livelihood.

Mangroves give protection to the coastline and minimise disasters due to cyclones and tsunami. Recent studies have shown that mangroves store more carbon dioxide than most other forests. 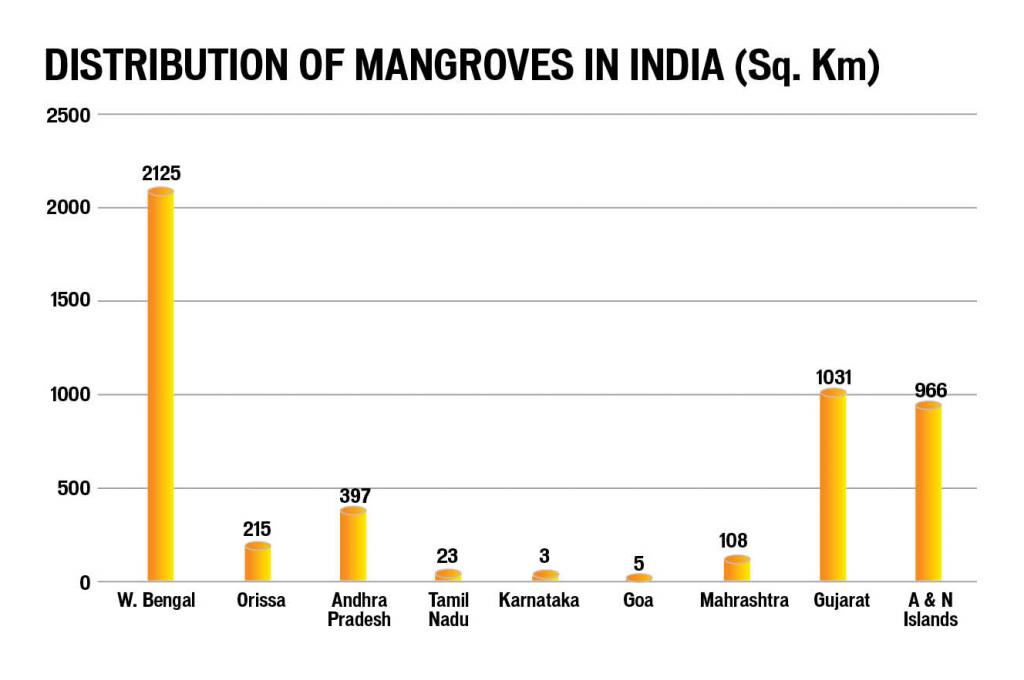 Muthupet is the biggest mangrove forest in Tamil Nadu with an extent of 11,885.91 ha with poor species diversity due to lack of fresh water supply. But mangroves are being destroyed and facing severe threats due to urbanisation, industrialisation, and discharge of domestic sewage, industrial effluents and pesticides. Saltpans and aquaculture also pose major threat to the mangroves.

As a result, mangroves get depleted to the tune of 2-8 per cent annually at global level; 40 per cent of mangrove forests in West Coast of India have been converted into farmlands and housing colonies over the last three decades.

Some of the mangrove species like Bruguiera cylindrica and Sonneratia acida are at the verge of extinction. Due to shrimp farming, about 35,000 ha of mangroves have been lost in India.

Though we have the Environmental (Protection) Act, the Supreme Court’s order banning semi-intensive and intensive aquaculture in the coastal areas, and the Coastal Regulation Zone (CRZ) notification with strict enforcement of the legislative measures, scientific management practices are very much essential for conservation and sustainable management of the precious mangrove forests.

Suitable sites are to be identified for planting mangrove species. Mangrove nursery banks should be developed for propagation purposes. The economic and ecological values of the species are yet to be identified.

The participation of the local community should be made compulsory for conservation and management. Floristic survey of mangroves along the coast is to be taken up to prepare biodiversity atlas for mangroves.

Potential areas are to be identified for implementing the management action plan for mangroves, especially in cyclone prone areas.  Socioeconomic studies on the mangrove-dependent people need to be taken up to involve them in management of mangrove biodiversity.

Coastal industries and private owners need to be persuaded to actively participate in protecting and developing mangrove biodiversity. The forest department officials should be trained on taxonomy, biology and ecology of mangrove species.

Agro-forestry along the periphery of mangroves in the wastelands can be taken up for providing alternate fodder to the cattle of nearby villages.  Alternative livelihood and income generation options like dairy farming, bee keeping, palm candy production, coconut leaf thatching, dry fish marketing, small provisional shops, vegetable shops, etc, can be taken up by the mangrove-dependent communities.

Periodical monitoring of the mangrove forest is very much necessary to assess the status. The impact of environmental and human interference on marine flora and fauna needs to be assessed.

The traditional rights of coastal communities to use the natural resources in their surrounding natural habitats for their livelihood should be recognised while formulating and implementing regulations and conservation measures on priority basis.

Therefore, while mangrove forests play a major role with more valuable ecological services, scientific management of the same is the need of the hour not only for the wellbeing of the mankind but also for coastal biodiversity.