Sylvan suburbia: Why a forest corridor between Delhi and Haryana needs legal protection 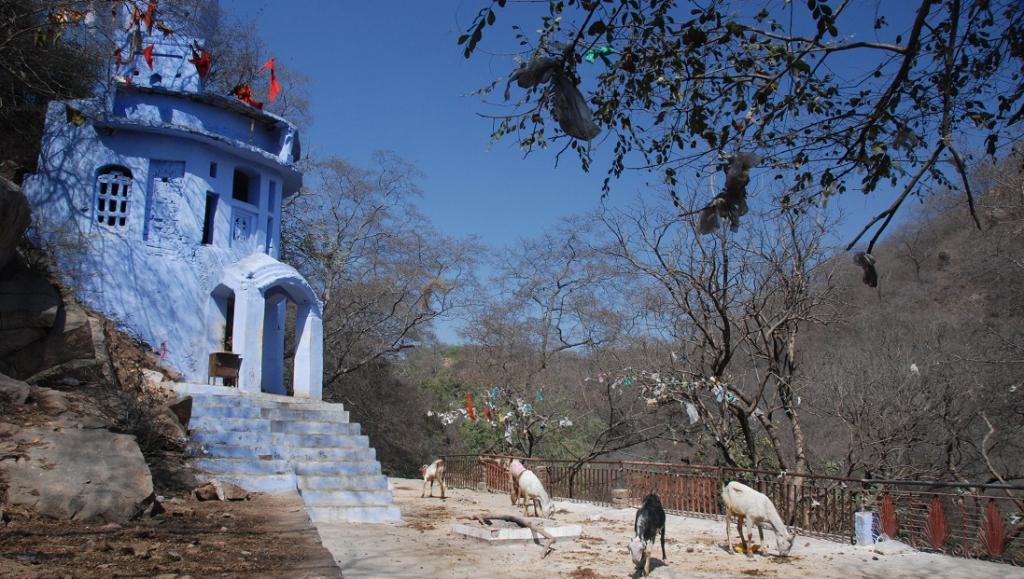 The shrine located in the Mangar Bani sacred grove in the forest corridor between Delhi and Haryana. Photo: Ghazala Shahabuddin

Imagine a forest as large as 200 square kilometres within Delhi and the National Capital Region (NCR). And then imagine that leopards, hyena, jackals and 12 other species of mammals roam this forest at night.

Most people would not believe that there is such a wildlife haven within this urban agglomeration. This vast tract of scrub and dry deciduous forest — to which most people would not ascribe any biological values — is located right along the Delhi-Haryana border.

Calling it a wildlife corridor would be appropriate, as it encompasses the entire Gurugram Aravallis, the Faridabad Aravallis and the Asola Wildlife Sanctuary, which together form an integrated habitat connecting the forests of Delhi with those of Haryana.

This area has more than 30 villages whose resident for most part, live with wild mammals in their backyard. They suffer the ravages of nilgai and porcupines in their fields and the intrusion of leopards into their properties. Yet, there is a palpable equilibrium between the wild and the domestic, maintained by the local cultural attributes of the Gujjar and Meo agriculturists.

At the heart of this forest corridor lies a unique oasis, a native forest protected due to religious sentiments. This 200-hectare patch, known as Mangar Bani (Bani means sacred grove), is the most diverse in plant and animal species in the entire forest tract, but the surrounding forests stretch as far as the eye can see.

Pradip Krishen, the eminent botanist, has called Mangar Bani the largest and most species-rich remnant of native scrub-dry deciduous forest in the entire Delhi-NCR. 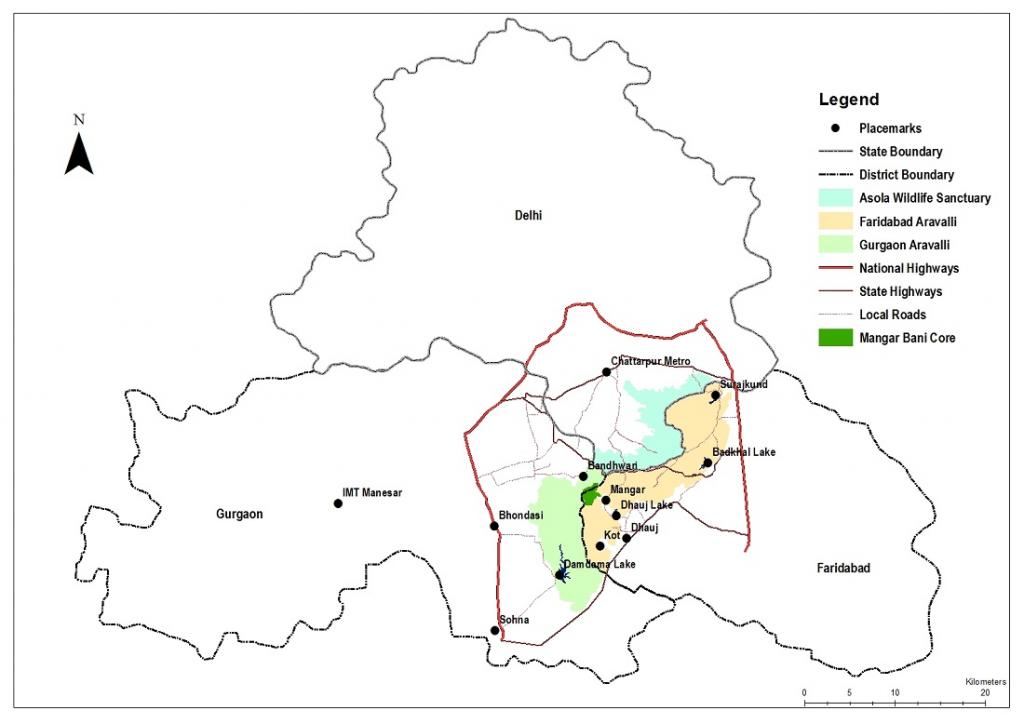 A map of Delhi, Faridabad and Gurugram districts in Haryana, showing the location of the forest corridor between Delhi and Haryana. Photo: Sunil Harsana

Several years of observation by Sunil Harsana, an environmentalist and researcher from Mangar village, had showed up the presence of hyenas and leopards in the Aravallis. In 2013, Harsana set up camera traps in Mangar, close to the forested streamside where the shrine is located. He got the elusive leopard, on camera, for the first time in the Haryana Aravallis. Later, pictures of Indian crested porcupine, ruddy mongoose and several other species were also taken.

With the help of Worldwide Fund for Nature-India, Harsana then extended his observations to the much larger area of the forest. Environmental analyst Chetan Agarwal and I lent our technical support to this exercise. During 2019, 81 km of transects were walked, both in the summer and in winter, to survey and map the mammals through their signs such as scat, dung, pellets, scratch marks and tracks.

Mammals such as nilgai, black-naped hare and jackals are relatively easier to spot, due to their habituation to people.

However, all of the other species such as leopard, striped hyena, the jungle cat and the Indian fox are far more difficult to see as they are shy and nocturnal. In case of such species, any signs of mammals, such as pugmarks, dung pellets, scat, kills and scratch marks, were recorded.

From village elders, we learnt interesting facts such as the historical rarity of wild boar in this entire area, which is unusual for the Aravallis. People also reported that jungle cats had become far rarer than in the past while leopards seemed to be on the rise, particularly close to villages.

The results of this intensive effort in mammal-tracking, have been revealing. As many as 15 species of small and large mammals occur in this area. Further, the densities of mammals appeared to be higher in the Gurugram Aravallis and in Mangar (as indicated by per km of transect walked) than Asola Wildlife Sanctuary, where the habitats are formally protected.

However, most of the species, apart from nilgai, black-naped hare, jackals and leopards, are found in low densities, due to the historical legacy of disturbance, mining and forest degradation in this part of the Aravallis. Protection may result in recovery of the rare species such as the Indian fox and the honey-badger.

Alongside, bird surveys by Misha Bansal throughout 2019, a researcher at CEDAR, aided by e-Bird data, showed 222 species just within the seven sq km of Mangar village. The patterns of bird occurrence were in parallel to those shown by mammals with the most species found in and around the remnants of riparian forest.

As many as 24 raptors (owls, eagles, buzzards, etc) have been recorded by now. The colourful Indian pitta, extremely rare in Delhi-NCR, has become the star of the show, which nests each monsoon in the Bani.

A striped hyena captured on camera in the forest corridor between Delhi and Haryana. Photo: Sunil Harsana

The presence of this immense variety of birds and mammals in this forest corridor reflects the presence of the mosaic of native forest habitats required for healthy fauna — water sources, thickets to escape from predators and food plant availability throughout the year. The more area that we explore, the more the number of biologically interesting sites we are discovering, hidden away in the rough rocky terrain.

For instance, two large troops of grey langur were located in and around remnant riparian forest near perennial streams, protected by local villagers. What is interesting is how little we know about the wildlife-people relationships in the villages of the Aravallis, despite the fact that these are literally inside Delhi-NCR now, barely two-five km from major highways.

Most Indian cities have either ignored the existence of such wildlife-rich areas in their backyards, or have wilfully destroyed such areas in the process of building infrastructure or expanding suburbia.

So Delhi-NCR is lucky to have such an ecologically rich area. This vast expanse of forest has also been found critical for preserving the ground-water aquifers on which Gurugram and Faridabad are dependent.

These aquifers have lately receded under pressures of over-extraction and widespread mining. So apart from wildlife, water security is at stake. There is still time to put into place certain regulations that can allow for the continued viability of this forest patch.

A leopard captured on camera in the forest corridor between Delhi and Haryana. Photo: Sunil Harsana

Other threats are ever-present: the Gurugram-Faridabad highway that was earlier a two-lane road, became a four-lane highway in the mid-2000s. Since then, there have been a number of road-kills of mammals, including two leopards, crossing from the Haryana side to the Delhi side of the forest corridor.

Also, the dubious privatisation of the Aravalli village commons has led to the real estate lobby making inroads into a few villages of Gurugram and Faridabad.

The administrative status of the forest corridor is a patchwork, currently. While Asola is protected as a wildlife sanctuary, the adjacent Faridabad and Gurugram Aravallis  are not. Less than half of the area is notified under the Punjab Land Preservation Act, (PLPA, 1900) which is treated as a forest according to Supreme Court orders.

However, so far, the remaining forests have not been given legal status as ‘deemed forest’ according to dictionary meaning, for instance, or included under   any protected area. Even the Mangar Bani sacred grove is awaiting formal recognition as a forest according to dictionary meaning. Given the extremely   limited land area (3.62 per cent) remaining under forest cover in the state of Haryana, conservation of the remnant forests in this state is critical.

It is primarily because of the tolerance of the cultivators and pastoralists, as well as their low-carbon lifestyle, that wildlife survives in the Aravalli Hills today. This forest corridor, with its villages should be given the status of a Community Reserve or a Biodiversity Heritage Site which can have active management by local residents.

People in Gurugram city, as well as numerous biologists, have also come out strongly in support of retaining this wild area as it is. Apart from biodiversity, the future water security of the burgeoning metropolis also depends on forest conservation. We should preserve this precious natural ‘infrastructure’. Built infrastructure can and should take a back seat, just this once.

Ghazala Shahabuddin is an ecologist and author researching people-biodiversity relationships, wildlife policy and applied ornithology in Western Himalayas and in the Aravalli Hills. She can be reached at ghazala303@gmail.com