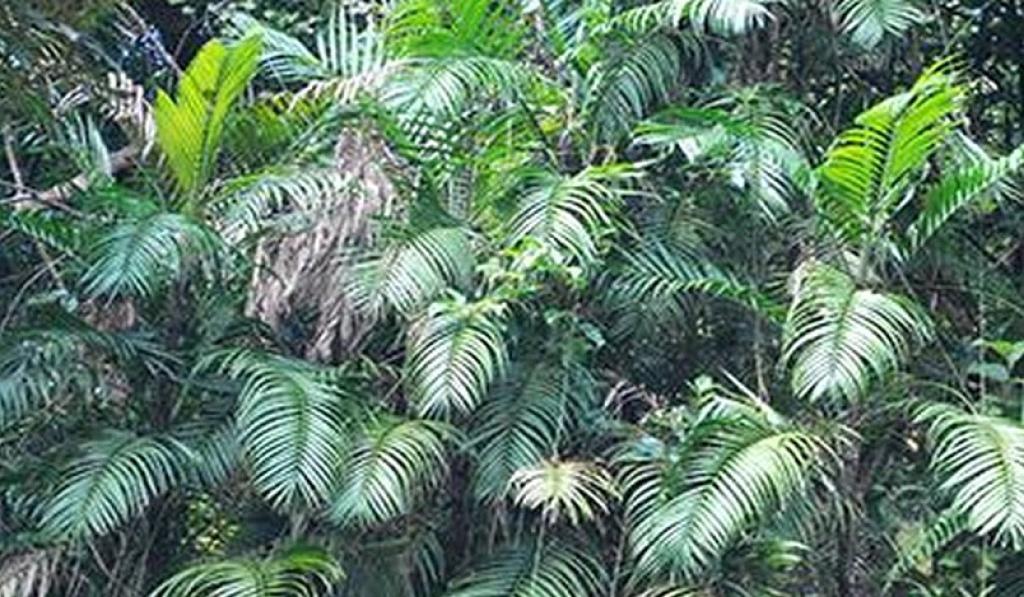 Rattans are climbing spiny palms, with about 600 species belonging to 13 genera, that are distributed all over the world. They are found in a number of countries and regions ranging from Australia to West Africa.

Rattans are an integral part of the tropical forest ecosystem. The numerous pinnate leaves (leaves growing on both sides of a common axis), with a length of about two metres, intercept the splash effect of rains and improve the water-holding capacity of the soil. They play a key role in enriching the soil through their leaf litter.

The fruits are also relished by monkeys, squirrels and birds.

Besides their ecological role, rattans have a wide variety of use in human societies. In certain parts of the world, the fruits and rootstalks are eaten by people. Some of the Rattan species have medicinal properties.

Their most important use is in the handicraft industry. They have been believed to have been used by humanity since the fifth century BC to make household articles, furniture, tool handles and bridge construction as well as sports goods like javelins, cricket bats and hockey sticks in modern times.

Rattans are important in handicraft and furniture-making because of their unique characteristics such as strength, durability, looks and bending ability. As they possess high value and social and economic importance, they are regarded as ‘Green Gold’.

However, the plant’s unscientific harvesting from the wild pose a considerable threat to its survival. Many commercially valuable rattan species have become extremely rare in their original localities today.

Scientists are of the opinion that Calamus neelagiricus, Calamus vattayila and Calamus pseudotenuis deserve the status of ‘endangered’ on the International Union for the Conservation of Nature Red List.

Tamil Nadu is home to a number of rattan species of which Calamus rotang is found in all districts of the state. Other species grow only in the Western Ghats spread over the districts of Coimbatore, Dindigul, Kanyakumari, Nilgiri and Tirunelveli.

Due to the availability of superior quality rattans that grow along the Kollidam river, rattan furniture-making industries have been functioning successfully in Thaikkal village of Tamil Nadu’s Nagapattinam district since antiquity.

But in Tamil Nadu, no sincere and serious effort has been made so far to conserve rattans sustainably. It is quite uncommon for the state forest department to raise any cane plantation. In the research wing, some attempts have been made in the past to raise certain cane species on a trial basis.

In the Mukkombu and Sholapuram research centres, some serious attempts were made by the research unit to raise Calamus rotang, Calamus thwaitesii and Calamus vattayila about a decade back.

Of the three species, only Calamus rotang performed well. But, unfortunately, no useful information about the cultivation of cane was evolved, resulting in abandonment of the cane trial plot.

About a decade back, the Palni Hills Conservation Council had raised a rattan nursery near Dindigul. After visiting the nursery, I suggested to the divisional forest officer of Dindigul to attempt a plantation by using seedlings as the division had suitable areas for such species. But, due to paucity of funds, it could not be carried out.

In the Western Ghats, large scale plantations of rubber, coffee, tea, cardamom, clove and coconut have been raised. Each holding has defined boundaries such as streams.

In these private holdings, rattan species can be cultivated along the boundaries and stream margins. Rattans can be introduced to supplement the income of farmers and planters even in areas where they are not usually found.

Rattans have been a perennial source of income to planters. According to Innovius Research estimates, the bamboo and crane craft market in India was estimated at Rs 3,910 crore in 2016.

As the extraction, conveyance, curing and other activities are mostly done manually, the industry generates employment opportunities for rural people.

The cane furniture industry also does not require heavy investments. It can also play a major role in earning considerable foreign-exchange. The requirement of tree species for making furniture can be reduced to a great extent when vast areas of cane plantations are raised. When tree felling is reduced, the ecology of the area can also be restored to a considerable level.

It is high time that the Tamil Nadu forest department rise up to the occasion to manage the economically, ecologically and commercially important rattan species sustainably for the betterment of the globe as a whole.