The multiple dangers of privately owning tigers and other big cats

Any presence of a big cat in private ownership is scientifically and morally wrong and poses challenges to human health, safety and security

On March 20, 2020, during the ongoing coronavirus pandemic, the world was taken by a storm with the introduction of the television series named Tiger King on Netflix.

Based on the life of Joe Schreibvogel, popularly known as Joe Exotic, who ran the Greater Wynnewood Zoo in Oklahoma, US, the television series rattled the imagination of viewers with the crazy mix of ego, murder, mayhem, animal cruelty, mystery and madness. According to a viewer survey conducted by Netflix, the series was viewed by 64 million households by the first month of its release.

Tiger King highlights an ongoing issue that has garnered added importance in the wake of the coronavirus crisis, ie, the issue of big cat ownership in captivity and the challenges posed to human health, safety and security.

The series has met with mixed reviews, with some animal rights and animal welfare activists protesting the depiction of Joe Exotic in the film, especially compared to some of the major protagonists in the film.

The film follows the trail of several individuals in the film who have been involved in the keeping and trading of exotic wild animals in the United States, a thriving illicit commerce, that runs into billions of dollars. Estimates show that there are around 5,000 tigers in captivity in the United States that is more than the number of tigers in the wild.

A lot of estimates of the US’ tiger numbers come from a 2005 study by Brian Werner of the Tiger Missing Link Foundation, which stated America had just under 5,000 tigers in zoos, sanctuaries and individual ownership.

The Feline Conservation Federation conducted its first big cat census in 2011 and thereafter, in 2016, completed a five-year follow-up. It was reported the total number of big cats in the US fell from 6,563 in 2011, to 5,144, a decrease of 22 per cent. The census revealed that the total number of facilities holding big cats fell 24 per cent, from 718 to 548.

These statistics are worrisome given that any presence of a big cat in private ownership represents continuing multiple dangers, scientifically and morally and these are dangers that must be addressed with alacrity.

In 2012, during a personal trip to Canada, I visited a roadside zoo in the province of Ontario named Elmvale Jungle Zoo. Seeing ten tigers, eight white and two normal, behind low fences supported by a wooden framework gave me a strange surreal feeling.

I could see firsthand, the physical dangers to visitors in Elmvale Jungle Zoo, should some of the tigers decide to exercise their jumping skills. Of course, as shown in Tiger King, the breeders, traders and owners of tigers do not necessarily restrict their dealings with tigers, but also extend their attention to other species of big cats like lions, leopards, jaguars and hybrid big cats like ligers (Cross between a male lion and a female tiger) and tigons(Cross between a male tiger and female lion).

Of late, with growing consciousness, there have been numerous reports about the private ownership of big cats all over the world, accompanied by audiovisual coverage in many television channels and films.

The Tiger Next Door, a film made by Camilla Calamandrei in 2009, explores the mindset of big cat breeders in North America, who are interested to create various morphological coloured versions of tigers, like white tigers, golden tabby tigers and white tigers without stripes.

The activities of private individuals dealing with big cats also lend us a glimpse into their world that is often full of promiscuity, drugs and violence and Tiger King deals with all these aspects in the life of Joe Exotic.

Closer home, in Asia, there are problems with captive tigers in countries like Thailand, China and Vietnam. Although there are tigers in captivity in Indian zoos, no close contact with visitors is allowed. In February, 2017, World Animal Protection (WAP), the non-profit I work for, drew the attention of the authorities to a proposal to create a tiger petting zoo in Kolkata.

In the wake of the scandal and closure of Thailand’s Tiger Temple in June 2016, WAP exposed the true scale of abuse that captive tigers were enduring at the hands of Thailand’s tiger tourism industry.

The report revealed a rapidly expanding industry, with a third more captive tigers (33 per cent) in Thailand in the past five years. The growing numbers of tigers indicates ‘speed-breeding’ of captive tigers without any conservation benefits and means more tigers are born into suffering. As of 2019, it is estimated there are approximately 1,570 tigers in Thailand. 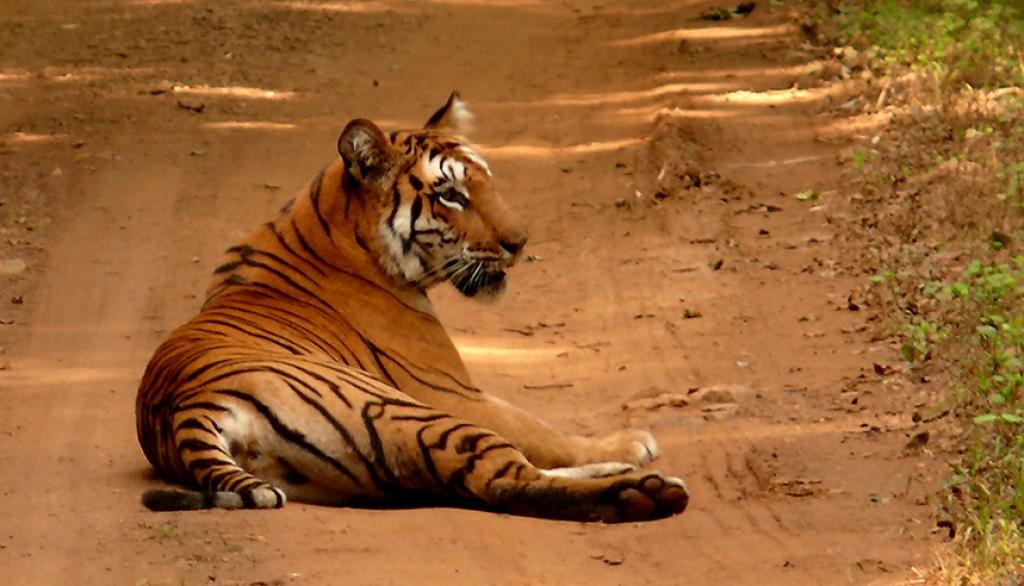 A tiger rests on a forest path in the Nawegaon-Nagzira Tiger Reserve, Maharashtra. Photo: Heerak Nandy

The main welfare concerns witnessed by the investigators at these tourist venues were:

• Tiger cubs that are separated from their mothers, two to three weeks after they are born
• Young cubs being presented to tourists, constantly viewed and manhandled hundreds of times a day, which can lead to stress and injury
• Tigers being punished using pain and fear in order to stop aggressive unwanted behaviour
• Most tigers being housed in small concrete cages or barren enclosures, with limited access to fresh water
• One in ten of the tigers that were observed, showed behavioural problems such as repetitive pacing and biting their tails. These behaviours most commonly occur when animals feel they cannot cope with stressful environments or situations.

Of the 17 tiger entertainment venues investigated in Thailand, Sriracha Tiger Zoo in Pattaya had the highest number of tigers in captivity. It is also the venue where the poorest animal welfare conditions were observed — with at least one tiger so thin the hips and ribs were visible.

WAP continues to press for proposing an amendment to the existing law — Wild Animal Reservation and Protection Act, B.E. 2562 — which would put a ban on captive tiger breeding. Our organisation has already submitted the draft amendment to the Thai parliament. Signatures of 10,000 supporters will be delivered to them on July 29 (World Tiger Day), 2020.

With more than one million Indian tourists visiting Thailand every year and wildlife entertainment venues remaining a popular destination for them, the people of India are in a position to make a significant difference for tigers, by not supporting the cruel industry.

Shubhobroto Ghosh is the Wildlife Research Manager of World Animal Protection and author of the book, ‘Dreaming in Calcutta and Channel Islands’