Why India must conserve its palm trees

The country has a variety of palm trees. But they are diminishing fast 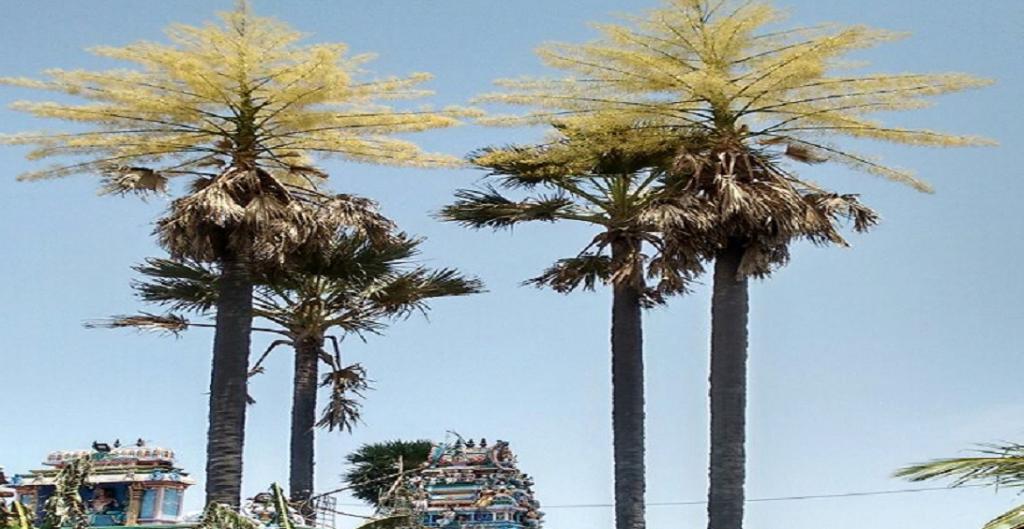 You all must have seen palm trees. They belong to the family Arecaceae (the old name being Palmae).

Palms are an important component of the tropical forest ecosystem. The family also includes many species of economic importance.

Palmyrah, Date, Sago, Caryota and many other palms are valued for their sweet water (neera), fruits, starch and other decorative plant parts. Palms attract the attention of horticulturists, foresters and nature lovers by their elegance and grandeur. The grace and splendour of palms probably made Linnaeus call them the ‘Princess of the vegetable kingdom’.

Among cultivated palms, the coconut tree (Cocos nucifera), known as Thennai in Tamil, is the most widely distributed species because of its ability to adopt varied climatic conditions. The coconut is called ‘The Wonder Palm of Heaven’ globally, because of its uniqueness.

The Palmyrah palm (Borassus flabellifer) is known as Panei in Tamil and Pana in Malayalam. There are 8.50 crore palmyrah trees in India, of which four crore are in Tamil Nadu.

This palm is cultivated and self-sown throughout Tamil Nadu and Kerala. Until modern times, the folded sections of leaves, known as cadjans, were used in south India for letters, documents and records of all kinds, the writing being scratched on the surface with a stylus.

The sweet sap obtained from the cut ends of the peduncle is the main product. The sap is fermented into toddy or made into jaggery. Palmyrah trees have been an integral part of coastal India.

The tree is considered sacred and worshipped as Karpaga Tharu. It is the State Tree of Tamil Nadu. In spite of its multifarious uses, this palm is decreasing in number at a fast rate.

The betel nut palm (Areca catechu) is called Kamugu or Pakku in Tamil and Kavungu or Adakka in Malayalam. This tall and erect tree is largely cultivated in groves in Kerala, the Uttara and Dakshina Kannada districts and the foothills of the Nilgiris and other hill ranges of south India.

Its seeds (betel nuts) are used for chewing as they are aromatic and stimulant. The palm’s spathes are used as plates, hats, etc. The betel nut palm is cultivated for its nuts, that are chewed along with betel leaves and considered an auspicious component of religious ceremonies.

The Kodai Panei or Koda Pana, also known as the Talipot Palm (Corypha unbraculifera) is a magnificent tree, with a height of about 24 metres. It is indigenous to the Andamans and Uttara Kannada. It is common to the Malabar coast.

The pith yields a kind of sago used as food. This is ‘monocarpic’. Monocarpic plants are those that flower, set seeds and then die. This tree flowers when about 40 years old, produces a large number of seeds and dies in the ensuing hot season.

The Talipot Palm, when in blossom, bears the cone of golden-coloured flowers of about 15 feet high, which, when ripe, bursts with a loud noise and diffuses an unpleasant smell. Because of this pungent smell, the natives will not place their huts near the tree.

This is the most majestic and wonderful of the palm family. The stem sometimes attains the height of 100 feet.

Each of its enormous leaves may form a semicircle of 16 feet in diameter and cover an area of about 200 square feet on the ground. The ‘Talipot’ is as big and tall as a ‘Ship Mast’. A single leaf will be able to cover about 20 men and keep them dry when it rains.

Pockets of this species can be seen even from a distance and occupies the cliffs where the soil is very shallow. Along the depressions, Alam Panei (Tamil) or Malam Thengu (Malayalam) (Arenga wightii) and Kana Kamugu (Pinanga dicksonii), are found in profusion.

Alam Panei yields highly intoxicating toddy that is much sought after by hill tribes. The nuts of Kana Kamugu are eaten by hill people as substitutes for betel nuts.

Koontha Panei (Tamil) or Chunda Pana (Malayalam) is found growing in the forests of the Deccan Plateau and the evergreen forests of the Western Ghats. Its wood is used for agricultural implements, water conduits, buckets, rafters, etc.

The leaves are used as brushes, brooms and ropes. The starchy substance obtained from the inner part of the stem is made into flour and used as food. The spadix, when cut, yields toddy and sugar. A tree is said to yield 16-80 cups of toddy a day. The leaves and stems are the favourite food of elephants.

Till the middle of the 20th century, the Palmyrah palm played a major role in the livelihood of a considerable portion of the rural poor population of Tamil Nadu. As the palm takes about 20-25 years to yield, it is dwindling drastically in numbers.

In spite of its immense uses, this palm is being destroyed in its habitats. Presently, there are only about 12, 000 trees in the state.

There is an urgent need to revive not only this palm species but the entire family of Arecaceae.

The Kerala Forest Research Institute has established a ‘Palmetum’ that has live collections of indigenous and exotic palms. This centre is used for creating awareness about conserving palms among the public.

This Palmetum has a collection of 125 species of palms under 52 genera. There are 72 indigenous palms and 55 exotic ones. Such kind of Palmetum can be formed in Tamil Nadu as well, with the view of making people aware of conserving them.

Generally, most palm species are found growing in forests areas. Many of them are becoming endangered due to habitat modification, encroachment and fragmentation.

Rare palm species should be brought under the Wild Life (Protection) Act and suitable measures should be initiated for protecting the same before they become extinct.

Despite the multifarious uses of this resource, significant attention has not been paid for conserving the same. It is high time that the central and the concerned state governments should take speedy measures for sustainable management of the same.