World Wildlife Day: India’s National Heritage Animal deserves the best in captivity and in the wild 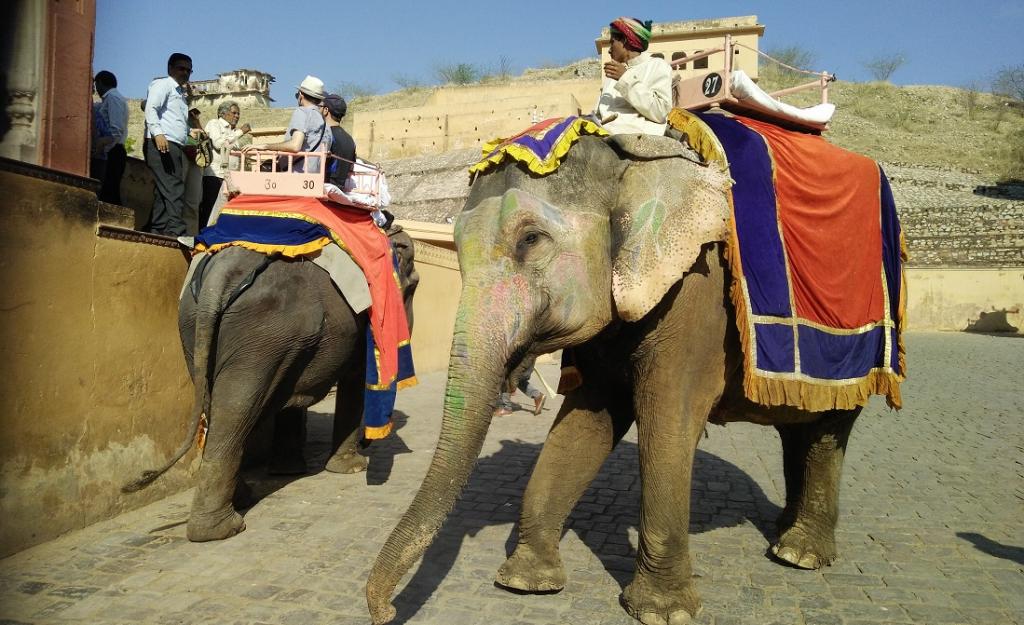 After years of campaigning against elephant riding at Amer Fort in India, the forest department of Rajasthan ordered for 20 severely sick elephants to be retired.

Veterinary inspections were carried out in July 2020. Based on medical and moral grounds, the department declared that the most sick and unfit animals should no longer be used for entertainment purposes.

This is a progressive step forward.

India’s Amer Fort is an iconic site, attracting thousands of tourists every year. The fort has more than 100 working elephants that, until the pandemic hit, were forced to carry tourists up and down the steep paved floors to the fort.

Our organisation, World Animal Protection (WAP), have been putting pressure on the local authorities to retire the elephants at the venue, not only because of the cruelty involved, but also because many are in dire need of medical help.

We have persistently campaigned for sick elephants to be taken off rides in Amer Fort. We have recommended that elephant rides be phased out in favour of more humane alternatives like electric or battery-operated vehicles.

It is hoped that the Rajasthan forest department will adhere to this decision in the interests of both human safety and animal welfare. We also hope that all stakeholders, including the elephant owners, will come together and seek elephant-friendly facilities for the maintenance of these sick elephants.

Eventually, we hope this will apply to all the captive elephants giving rides at Amer Fort. We will be very happy to play a constructive role in this transition from elephant rides to elephant-friendly facilities.

More to be done

These elephants have had hard lives. They would have begun life by being ripped away from their mothers at a young age and then cruelly trained to make them submissive enough to ride. We are delighted that around 20 of them are finally being retired from this awful life of captivity, but we will not give up until elephant riding is a thing of the past

WAP is monitoring the situation closely. It might be the case that the elephant owners will challenge this directive in the court.

We are liaising with other groups to request the government to stand by their decision and not to allow the sick elephants to be ridden as a result of resistance from the elephant owners.

WAP has also welcomed the news that the Madras High Court has recently opined that a uniform policy should be put in place to completely prohibit future ownership of elephants by individuals or temples and to bring all elephants under the care of the forest department.

The judiciary is to be lauded for stating, “Any kind of mistreatment of elephants and other animals must be dealt with promptly and as mercilessly as such persons deal with the animals.”

Given that an elephant was abused in Thekkampatti rejuvenation camp for temple and mutt elephants in Coimbatore, WAP has reiterated its commitment for all elephants to be humanely treated.

The court heard the public interest litigation petitions moved by activist Rangarajan Narasimhan over the alleged inhumane treatment of certain elephants at the Srirangam Ranganathaswamy temple in Tiruchirapalli.

In this regard, it was pointed out that according to the Tamil Nadu Captive Elephants (Management and Maintenance) Rules, an elephant must be maintained by the same mahout during its entire lifespan, except when they are under inebriated condition or suffering from a prolonged illness. He stated that the elephants in question did not have records required for their possession.

“There are numerous cases on record on cruelty to captive elephants in private possession so WAP applauds the Madras High Court for suggesting a prohibition on the private upkeep of elephants as a welfare measure,” Gajender K Sharma, country director, WAP, India.

The directive of the Madras High Court regarding the welfare of captive elephants serves as a precedent for the treatment of the elephants that continue to suffer at the famed Amer Fort in Jaipur in Rajasthan.

Recently, a wild elephant came inside the Midnapore College in West Bengal and caused widespread panic and mob behaviour. Forest department personnel were able to rescue the elephant and return the creature to the Arabari forest habitat where the animal belonged.

WAP applauded the West Bengal forest department staff for helping this animal in distress and setting a good example to respect wild creatures and return them to their habitat in the wild, where they belong.

The National Heritage Animal of India deserves the best in captivity and in the wild from all stakeholders in India, nothing else. Let us ensure that these giant pachyderms stay safe in this land that has revered them for milliennia.

Shubhobroto Ghosh is Wildlife Projects Manager of World Animal Protection and author of the book, ‘Dreaming In Calcutta And Channel Islands’