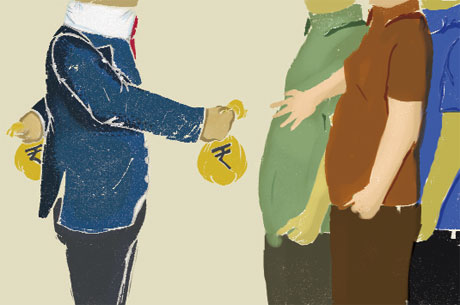 When the Ministry of Corporate Affairs tables the Companies Bill of 2009 in the ongoing monsoon session of Parliament, the members will put their heads together over a thorny recommendation: every year corporates should earmark two per cent of their net profits towards social causes, better known as Corporate Social Responsibility (CSR).

India Inc has opposed this allocation saying it should continue to remain voluntary. The suggestion for earmarking a part of a company’s profit for CSR was floated by the Parliamentary Standing Committee on Finance in 2009 after it vetted the bill, which seeks to replace the Companies Act of 1956. At present, most private firms spend one per cent on CSR. Mandating CSR expenditure may prove counterproductive, says Indrani Kar, deputy director general of Confederation of Indian Industry. “Companies will undertake activities merely to fulfil the legal requirement of two per cent rather than innovating strategies that are of societal value,” she explains.

The Companies Bill of 2009 seeks to better regulate firms, which have expanded from about 3,000 in 1956 to nearly one million today. The bill also includes a provision that makes it mandatory for every company that has net worth of Rs 500 crore, or an annual turnover above Rs 1,000 crore, to disclose its expenditure on CSR activities.

The standing committee, headed by former minister Yashwant Sinha, recommended that every company be mandated to have a CSR policy and spend, not just disclose, two per cent of their net profit after tax every year. In case a company does not make adequate profits, it must give reasons for the same in its annual report. Bhartruhari Mahtab, a standing committee member, says, “We arrived at the two per cent figure after consultation with industry bodies and the public,” he adds.

But the Corporate Affairs ministry does not quite agree with the bill. “No penal action should be taken against companies which spend less than two per cent. The idea is to make public disclosures mandatory, which will put moral and peer pressure on companies,” says Renuka Kumar, joint secretary in the ministry. Everybody wants to be seen on the right side, adds Kumar. “Why set a ceiling on how much good a company should do?” she asks. The Planning Commission too does not recommend mandatory spending. This amounts to privatising taxation, says Montek S Ahluwalia, deputy chairperson of the commission. He argues it would be better to raise corporate tax by two per cent.

Jugal Tandon, chief executive officer of the development wing of the JSW Group, a US $8-billion conglomerate, says CSR should be voluntary and involve empathy and concern for society and the environment.

Last year, the Department of Public Enterprises had issued guidelines on CSR for the Central Public Sector Enterprises. As per the guidelines, the CSR budget will be mandatorily created through a resolution as a percentage of net profit (see table). Tandon says, “In case of private companies, the urge to spend on CSR should come from within and not be imposed.” The JSW Group claims to spend 1.5 per cent of its profit after tax on CSR.

The CSR Voluntary Guidelines issued by the Ministry of Corporate Affairs say CSR is not philanthropy, and the culture of social responsibility needs to go deeper into the governance of the businesses. “CSR is window dressing. To a certain extent, many corporates will not do it if they do not find any visibility in the public eye,” says Deepa Menon, head of PVR Nest, the CSR wing of PVR Cinemas. “While companies’ willingness to spend is changing, unfortunately as things stand today, there is neither any prescribed formula nor any mandate on CSR,” she adds. CSR is high on the agenda of many companies. It has also become a consumer priority, says Menon. “If companies want to keep their goodwill intact, they cannot turn their back on the socio-political challenges of the country,” she adds.
Special Report Special Report Legislation Industry Industry India Corporate Social …
SUPPORT US