Energy-efficient agriculture of the Apatanis 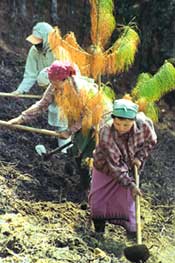 Ihave negotiated with Bukur to meet a variety of people -- politicians, gaonburahs (village council members), buliangs (traditional village elders), college students, the women who run the weaving cooperative, the first kiwi farmer in village Lempia. Bukur has figured out my intentions by now. So has Tage Bunyi, the 15-year-old daughter of Tage Tunku, a very active weaving cooperative member; one day she tags along with me. Bunyi studies in a boarding school in Harmoti, a township bordering Assam and Arunachal Pradesh. But she is now back home for Myoko. The youngster tells her friend: "No, he does not click any sunrise and sunset pictures from the hill top, always people and fields." Stung, I refocus on an omnipresent element of the landscape: fences.

Each piece of property is fenced. Slashed at the top (they use the dao, a sword, for that) and then bound together, bamboo is used to partition everything: standing stocks of plants in a grove, pine forests, fields, houses, granaries and nurseries. After a while, the fences close in on me, like walls in a city.

But the place requires it be so. Resources are scarce in the Apatani valley, a piece of land is invaluable. As Bukur's father, once a renowned hunter, says, "Each piece of agricultural land is cordoned so that we do not fight." The sense of property and ownership is immense.

Is it this intensity that makes them squeeze every possible drop of energy out of the land? According to Ramakrishnan, for each joule of energy invested in an Apatani field, much more comes out as rice and other agricultural produce.


The Apatanis effectively use irrigated land by planting early- and late-ripening varieties of rice. Villagers can recount six varieties of rice off-hand. Query on, and the older ones can come up with eight. But Dollo has collected proof of sixteen.

Irrigation canals drawing water from streams in the valley feed each plot of meticulously terraced land. Water levels are controlled in plots -- with gradients as tiny as a few centimetres -- via bamboo tubes. Irrigating the flatter plain lands is more arduous: each drop of water has to be pulled as far as possible over an ever-decreasing gradient, through manually dug canals with bamboo scaffoldings. The canal walls are held together by plant varieties such as Eleusine coracana, which bind the soil and also provide end-season leafy vegetables.

Every inch of the canal bund is used intensively. This demands maintenance. People get down to it right after the rice is harvested. The community collectively maintains canals till the feeder points; individuals tend them near their fields.


If the canal requires careful maintenance, the intensively used soil needs extra nutrients. But the Apatani has it all worked out, almost magically. Huge volumes of biomass, from the mixed-oak forest on mountain tops, are source of nutrients at one end. At the other, houses with piggeries supply recycled waste. The two create a graded system of soil fertility, with nutrient-rich plots closer to the village and nutrient-poor ones consigned to the middle of the fields.

With dozens of vegetables as well as wet-rice feeding of it, one might think the land gets squeezed to its limit. But the Apatanis also turn their agricultural fields into fishponds. Fish culture -- usually that of the common carp -- in plots closer to the village synchronises well with the late-ripening rice variety. The ponds are managed as meticulously as the irrigation canals. It's tricky business: too much water in a plot and the standing crop would be destroyed; too little, and the fish won't survive. The balance is crucial. The fish seeds are introduced when the water is nutrient-rich enough. A trade-off occurs. Also, the fish must share nutrients in the water with the paddy: so fish seedling numbers have to be carefully calculated.

The result of all this? The energy efficiency of the Apatani agroecosystem is around 60 to 80 joules per joule of input. Green Revolution agriculture fares dismally in comparison: it gives less than a joule for every joule of input. The valley's energy input-output ratio is also considerably higher than that of other traditional mountain systems in the region. There, the value is in the range of 9-50 joules, writes Ramakrishnan.