A bolt from the blue

If critical air traffic control operations are not beefed up by adequate and modern infrastructure, nightmare is bound to happen in the Indian skies

A bolt from the blue 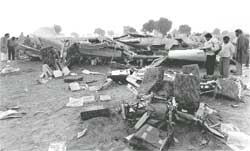 AS THE debris of the first ever mid-air collision in the history of Indian aviation between a Saudi Boeing and a Kazakh il-76 aircraft lie spread over an area of 10 km in Charkhi Dadri -- about 80 km southwest of Delhi -- several investigations are on to probe into the disaster.

Whether it was pilot error or instrument failure, for aviation experts, however, the cause behind the collision that claimed 351 lives and reduced the safety of the Indian skies to a myth, lies somewhere in the haloed portals of the ministry of civil aviation and the National Airports Authority (NAA).

The omen has long been felt to be disconcerting on the ground itself. The "airport stress syndrome" came to roost in India with the statement of an annual air traffic growth rate of five per cent and the naa projection that the rate would have climbed to eight per cent from 1996 (see Down To Earth, Vol 3, No 12), thanks to the open skies policy adopted under the aviation glasnost.

If the sheer magnitude of the November 12 accident makes the word 'tragedy' sound like an understatement, the word 'crowded' fails to convey the state of the Indian skies, once thought to be generous and capacious. Says air marshall D Keeler, former additional director general of civil aviation (ADGCA), "The quantum of air traffic handled by airports like Delhi and Mumbai has flown above the danger mark. We are promoting its further growth and approaching the target of close to 20 flights per hour. Aviation operations are a matter of dealing with carefully carved out corridors, and presently, the corridors resemble a choked throat."

But the asphyxiation of air corridors is not an unheard of phenomenon. Way back in 1988, when Vayudoot was being conceived as the alternative domestic airliner to the sagging Indian Airlines, jams in the air with aircrafts flying bumper to bumper were foreseen. Air Traffic Control (atc) was identified as the key area of growth to handle the number of flights that resembled German armadas over England during World War II.

K V N Murthy, former executive director (planning), naa, says, "There are airports in the west and the east which are handling much more traffic. But the difference is the quality of technology at disposal in the air traffic control rooms that makes their job easier and reduces the error margin."

It is indeed a startling revelation that air traffic controllers at the Delhi and Mumbai airports which, incidentally, are the most modern ones, monitor air traffic manually. Surjeet Singh, a controller in Delhi says, "We handle flights on paper and fix recording points for both incoming and outgoing flights. Once a flight reports its presence, we fix another slot and then move to the next. Once there is a computer to do all this and a sensor to feed a voice system, we can cut down the time taken to handle each flight."

In fact, an ambitious atc automation project was conceived in 1988 by the naa in collaboration with the International Civil Aviation Organisation (ICAO). Following global tenders in 1990, the contract went to the lowest bidder -- Raytheon -- a us-based company. Today, the project outlay cost is Rs 423 crore.

Of the seven vhfos that were proposed, four have been installed. But there were complaints of radar 'slippage'. For example, on the radar screen one aircraft was shown by two blips, and often, the radar did not pick up the signal of a moving target within its range. According to airport officials, apparently the equipment supplied had some defects in the software.

Says Keeler, "Had the new radars been commissioned in time, then there would have been fewer chances of this collision. Ironically, the given date of completion of the automation project was November 1, and the crash took place within a fortnight's time."

Keeler says that the collision occurred because one of the two aircrafts strayed into the others flight path although the Saudia plane was directed by the atc to maintain a height of "14,000 ft and level" after leaving Delhi, and the incoming Kazakh airliner was asked to maintain "15,000 ft and level".

It has been recorded that the two aircrafts were at a distance of 13 miles, and were, according to the pilots, maintaining their respective heights (later, a section of the press reported that the Saudia aircraft had assumed excess height). But 13 miles is a minor distance between two aircrafts moving towards each other along the same path at the speed of 260 nautical mile/hour -- to be covered within a matter of seconds.

The atc at the control tower saw the two aircrafts on the screen as two blips. He knew the distance between the two and their position, but not the speed or the height, because the 20-year old radars in use at the igia do not provide this kind of data. Therefore, even as the two blips converged on the screen, the atc saw no cause for alarm. It was only when the blips did not separate themselves and carry on along the designated path but just vanished from the screen, that the initial shock set in. Says Murthy, "World over, the atcs have detailed data and they warn the aircrafts from straying into each other's path. But not so in India."

Experts like Keeler say, "What is important is the fact that the control tower did not have an inkling that the two crafts were on the collision course. On the radar screens that are in use, all incoming and outgoing flights on the same radial seem to be on the collision course. These two dots, however, met on the screen and disappeared." The former adgca says that even a freak meteorological phenomenon could have led to the collision.

H S Khola, dgca, however, refuted charges that the equipments at the igia control tower were outmoded. He was speaking at a press conference in New Delhi, on November 13. It is also not known whether the aircrafts were equipped with a collision warning system, mandatory for aircrafts operating in the developed world. But it was not just the absence of certain instruments that invited the disaster. There were other lapses as far as the general operation procedures laid down by the icao are concerned, the most crucial being the 'lateral separation' of the incoming and outgoing flights.

Says Keeler, "The aircrafts in the sector (path) were separated by a height of 1000 ft. That is one level of safety margin. But then, they could have been separated laterally also, so that, even if there is some problem in levelling, they are still not on collision course." The two ill-destined aircrafts were flying in a sector once nicknamed 'green five two', which handles more international flights than domestic ones. Normally, all sectors have corridors with lateral seperation for both incoming and outgoing, as well as domestic and international flights. In fact, all corridors in the Indian air space have provision for lateral separation, with the exception of this particular one.

Keeler says, "The lateral separation was not done in this case as it was claimed that the corridor towards Pakistan in the west is too narrow. But I do not agree. It is at least three km wide, and there is scope for lateral seperation for adding another safety margin."

The alibi adopted by the naa was that the Indian Airforce has always resisted expansion of the corridor citing security reasons. But according to Keeler, the airforce had, some months ago, called for negotiations for widening of the corridor.

Another factor is the curfew system enforced by countries on the east and west of India due to the immense noise polllution caused by the aircrafts. Thus, to skip night travel through these countries, aircrafts on international sorties prefer night flying over India. But with ancient radars and communication systems in our country, night flying increases the risk factor all the more. Recently, the situation had improved a little when in Delhi and Mumbai, an Instrument Guided Landing System was installed to facilitate safe take-off and landing.

To take a look at the West, in the us, a comprehensive plan known as the Future Air Navigation System (fans), is being drawn up by aviation authorities which is expected to be operational from ad 2010. A close-up of the system shows the following features:

The gsns, which will update positional information on aircrafts, is a combination of observation and communication satellites. Several European nations have expressed their interest in this system. According to the naa, the Indian authorities, too, are keen on having the fans installed for a safer flying future.