A clear case of racism

In New York, bus depots are located in areas where coloured people live

A clear case of racism 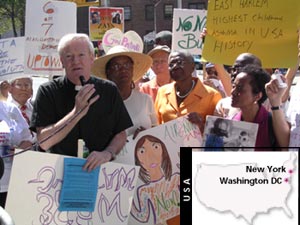 If you thought that government departments of one of the richest countries in the world have a conscience, you are completely wrong. Residents of New York City along with several non-government organisations (ngos) have been waging a long, and tiresome, battle against the Metropolitan Transportation Authority (mta) in New York for cleaner policies for coloured communities and low-income groups, but to no avail.
Northern Manhattan, inhabited mostly by communities of colour, is home to five out of seven of Manhattan's currently operational bus depots, which spew out asthma-triggering and cancer- causing diesel exhaust. The battle started in November 2000, when the West Harlem Environmental Action Inc (we act, an ngo based in West Harlem) demanded that the mta stop using northern Manhattan neighbourhoods as a diesel dumping ground. This complaint was filed under Title vi of the Civil Rights Act, which states that no entity that receives federal funding can discriminate against people on the basis of race. mta is a government organisation funded by federal agencies.

Not surprisingly, mta's response was that weact's charges were baseless. They asked for the complaint to be dismissed. Further, they claimed the location of bus depots was driven not by race but by "legitimate business necessities". Of course, it was also noted that depots could not be built in other community areas due to "unacceptable community and environmental impacts". weact's "counter-response" to this was fortified by a statistical and zoning analysis. This showed that in Manhattan, the number of people of colour living within a quarter mile of a bus depot was 27 per cent higher; ergo, the higher risk of their suffering from adverse health effects. weact convinced the us Environment Protection Agency to test Northern Manhattan's air quality and found that small particles in the air exceeded us standards by over 200 per cent.
In November 1999, the mta had made tall promises about cleaning up its bus fleet. These ranged from purchasing 300 compressed natural gas (cng) buses to converting two depots to cater only to cng buses. It also promised to expand the Hybrid Bus Programmes, purchase 250 hybrid buses, develop hybrid articulated and coach buses, increase the use of clean diesel technologies, retire all 2-stroke diesel engines by 2003, convert the entire fleet to reduced sulphur fuel and retrofit 3,500 buses with catalysed exhaust filters.

Notwithstanding all this, it is clear that mta is taking the diesel route. It had committed to maintaining its four-stroke diesel coach bus fleet at 450, but this has increased to 569. Moreover, it was to increase the four-stroke diesel transit bus fleet to 2,370 by 2006; but already by this year, the number's become 2,737. Furthermore, mta spokesperson Dana Lowell believes that the mta is likely to add another 136 diesel buses to the fleet by March 2005. By that time the mta will have only 476 cng buses and 335 hybrid buses -- nowhere near their committment.
weact and other organisations have been consistently claiming that bus depots are located in areas where communities of colour and low income predominate. When questioned about this, Lowell said that " to minimise operating costs, the New York City Transit strives to locate bus depots as close to the beginning of assigned bus routes as possible, in order to minimise unproductive 'deadhead time'." "This is patently untrue. The closest depot to all downtown routes is now on 41st street -- why isn't the mta making efforts to minimise that?" counters Swati Prakash of weact.

With the mta claiming to have cleaned up its bus fleet and people of colour fighting for their health, the battle threatens to be a long one.