A day with Shibu Karmakar

Nitin Shethi learns more than he had reckoned, from local wisdom

A day with Shibu Karmakar 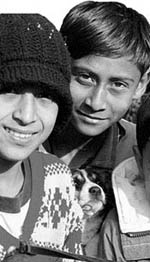 Shibu Karmakar was trespassing. He knew the word. But at 11, he was too young to comprehend what it meant and easily breached the fence to the forest. The forest wasn't 'his', unlike how many wildlife aficionados put it. It was just a forest, a place Shibu went each morning to collect firewood. His house, he said, was in Shivnagar village, right on the forest fringe. The rail track leading up to Darjeeling passed near his house before snaking uphill. The forest? Officially, the Sukna range of the Mahananda Wildlife Sanctuary, northern West Bengal.

Today Shibhu had other business on hand. He had struck a contract. He would carry my binoculars and use them first. In return he would show me the forest. I was keen to see birds. He liked to mow them down with his catapult, he said.

It was a lucrative deal. He seemed to know more about birds than three other kids I had met that winter morning at the entry gate. I asked him how. "My parents have gas at home," he said. I must have looked befuddled; so he explained: "These three have to collect firewood for four to five hours. I have to do so only for a couple. The rest of the time I can while away, observe things around me." And then he pointed out the dhanes (great pied hornbill) flying east of us some 100 metres ahead. "This one we don't kill." I did not ask why. He did not bother to explain.

We walked along the almost dry bed of Sukna river, strutted up the rising ground alongside and navigated our way around the electrified fence. "It's meant to keep the elephants away. This one is new, it works; but I have once seen a tusker push it down by throwing a tree on it," he said. "How far away were you?" I ask. "Far enough to be safe; excreting!" his laughter was half-muffled.

He used local names for the birds he pointed out. It took some effort convincing him not to pelt the winged ones to ground (he could get one down in about five shots, he assured me). The plumage of the bird did not impress him. His criterion was different: "Meat," Shibu said. "Sumptuous meat." In between showing me a few woodpeckers he would ask me a dozen questions about how binoculars worked. It got tough as he got into the nitty-gritty of optics. I didn't have words and he goaded me with questions.

"I have once earlier used a pair of binoculars, a foreigner let us see through it. But he wanted us to show him elephants. Why do you see birds?" "I like to click their photographs," I lied.

"I don't have a camera," he said pretending to be nonchalant. But his nimble fingers and deft hands were soon setting up the tripod in record time for me to click. I told him of a pinhole camera, in return asked him local names of trees. He had little interest in names, he admitted. "I can distinguish them by characteristics but not name them. The ones that bear fruit or the ones that contain resin or the one on which the dhanes breeds, I know many," he allowed himself one boastful sentence. " Ma (mother) knows much more. I shall learn the names, if you are coming again soon. Please get one photograph of mine though," he said as we parted company. I walked away wondering, if trained, would he make a field guide or an ornithologist?