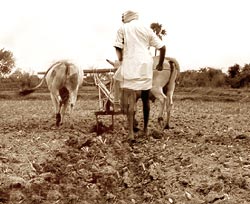 "The strategy for agriculture will certainly create new jobs, especially in the allied sector. However, agriculture's share of employment will actually reduce, from the current 70 per cent to 40-45 per cent.... As economies grow, the focus of economic activity shifts from primary activities to those that lead to greater value-addition. As Andhra Pradesh's economy develops, it will follow the same pattern, shifting from a predominantly agrarian to an industry- and services-led economy. As a result, more and more jobs will be created in industry and services as compared to agriculture."

The infrastructure that supports agriculture collapsed right through the 1990s
• Agriculture and allied sectors account for a third of Andhra Pradesh's (AP's) GDP. They provide livelihood to over 70 per cent of its population. But in 2003-04, total expenditure on agriculture and allied services was 2.52 per cent of the total expenditure on economic services. In other words, while agriculture's significance to AP's economy and society is immeasurable, the attention the state has been paying to it is negligible

• The state's self-generated revenue in 2003-04 was Rs 18,169 crore, while its total expenditure was Rs 42,081 crore. Of this, Rs 24,000 crore was spent on salaries and pensions, debt repayments and interest payments alone, leaving only Rs 18,088 crore to spend on building those capacities -- irrigation, road, transport, energy -- that helps an economy to grow