A decade of loot

At more than Rs 65,000 crore, the mining scam in Odisha has surpassed that in Goa and Karnataka. The penalties, however, came too late

A decade of loot

In December last year, days before an inquiry commission headed by justice M B Shah was slated to visit Koira and Joda mining circles in northern Odisha, piles of documents were burnt in the office of deputy director of mines in Koira. In November this year, just days before the commission’s third visit, the Odisha government slapped a fine of Rs 65,493 crore on 104 mine lessees for extracting more than the permitted quantity of iron ore, manganese and chromite between 2000 and 2010 (see ‘Who’s who among offenders’).

The commission was set up by the Centre in 2010 to probe illegal mining across India. It is expected to submit its report on Odisha by December end.

At present, of the 600 leases in the state, 388 have been either suspended or temporarily discontinued. The state environment minister recently told the Assembly that 111 mines have been listed for violating Environment Protection and Forest Conservation Acts. In October, the state government notified that second and subsequent renewal of mining leases will be restricted to captive users, that is, lessees without any industry of their own will not be eligible.

The Rs 65,493 crore fine has been recorded as royalty for overextraction and transit passes (given by the state to vehicles carrying minerals out of mines) issued. “But what about the mining beyond leasehold areas which include forestland?” asks Union minister and Congress MP from Odisha Srikant Kumar Jena who says the total loss from illegal mining in the state is Rs 4 lakh crore. Accusing the Odisha government of hoodwinking people, Jena says, “It has imposed the fine on mine lessees to put a brave face in front of the Shah Commission.”

The decade beginning 2000 witnessed a boom in iron ore prices. To reap benefits, miners in Sundargarh and Keonjhar districts, which include Koira and Joda circles, started mining in excess of the limit approved by the Indian Bureau of Mines. They stretched operations beyond their lease areas and continued extracting even after their leases had expired. Mining was done without acquiring mandatory environment and forest clearances or the “consent to establish” from the state pollution control board. 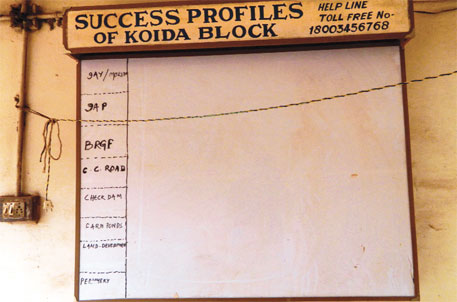 Traders transported the overproduce by bribing through check posts. The iron ore was eventually exported to China. Thousands of trucks carrying ore moved daily on broken roads, says Satyabrata Panda, an economist based in Bhubaneswar, while recalling the day in 2005 when his car moved inch by inch in Sundargarh to cover four kilometres in eight hours. A 2008 report by the Auditor General found that many trucks in the Baripada mining circle in Mayurbhanj district were using number plates assigned to motorcycles. Of the eight circles reviewed, six did not have government check gates, says the report.

In 2009, a report by the Principal Chief Conservator of Forests, Odisha, provided evidence of mining in forestland, tampered boundary pillars, construction of roads inside reserve forest in Keonjhar and Sundargarh, and rampant illegal mining along the Jharkhand border (see ‘Pushing the pillars’). The same year, Rabi Das, senior journalist based in Bhubaneswar, filed a petition in the Supreme Court alleging organised illegal mining with active support of the state government. Das argued that 155 leases were operating “without any valid authority… most of which include forest areas and by whom the mandatory clearances from the Central government has (sic) not been obtained ”. 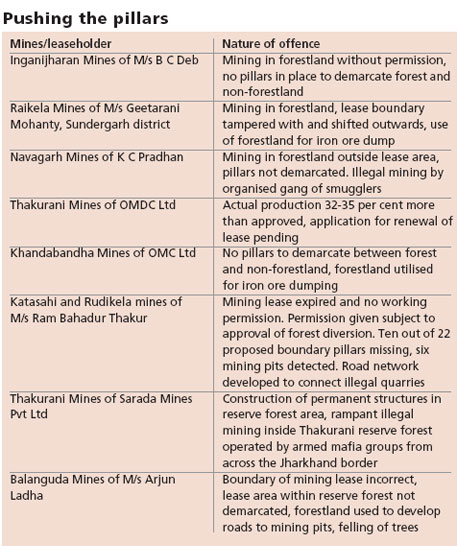 In response, the court appointed a Central Empowered Committee (CEC) which submitted its report in 2010. The report observed that of the 341 mines operating, 215 were working under the “deemed extension” clause of the mineral concession rules under the Mines and Minerals (Development and Regulation) Act. “The deemed extension clause is primarily meant to deal with contingency situation and to ensure that mining operations do not come to an abrupt end… This provision is not meant to be availed of indefinitely. Continuing mining over a long period of time without renewal of the mining lease becomes a potential source for serious illegalities and irregularities,” notes the report.

It observed that mining activities were going on in a large number of mines without requisite approvals under the Forest Conservation Act and the Air and Water Acts. Despite the findings, many violators, especially big companies, got away without any hassle, says Panda. Tata Steel, for instance, renewed its mining lease and increased production capacity from six million tonnes to 12 million tonnes in a year even when the Divisional Forest Officer (DFO) of Keonjhar had slammed the company for violating forest laws and illegal mining in 2011. Similarly, Rungta Mines renewed its lease despite violations. The DFO was transferred after he filed damning inspection reports.

Panda, who has been analysing the mining sector, points to another problem. “For the 80 million tonnes of iron ore produced in 2010-11, the environmental cost of handling overburden (waste produced while mining) would be Rs 26,000 crore. This is absurd since the market valuation of 80 million tonnes is less than Rs 10,000 crore,” he says.

Referring to the Rs 65,493 crore fine, Supreme Court lawyer Jayant Das says the notice of fines given to mine lessees will not stand in the court of law. “The firms were not issued a show cause notice where they would have a chance of replying,” adds Das, who is fighting a case on illegal mining in the state.

Prafulla Samantara, a civil rights activist in Odisha, says the penalties were imposed as a face-saver ahead of the Shah Commission’s visit. “What was the state government doing for 10 long years while the loot was on?” he asks.

Two instances bring home the point. Earlier this year, the state had fined Raikela Iron Mines, leased to Geetarani Mohanty, Rs 40.37 crore for excess production of iron ore. The notice was issued after the Auditor General raised an objection in the 2011-12 audit. The mine lessee appealed to the revision authority in the Union Ministry of Mines and got a stay on the order to pay fine. Similarly, a fine of Rs 1,132 crore imposed on Indrani Pattnaik mines was stayed. “The state government is not serious about recovering the amount,” says lawyer Das.

Fifty years of mining have done little to improve people’s lives, says Kanhu Charan Mohanty, activist in the region from NGO Ekta Parishad. Despite overproduction of minerals, jobs are not easily available as most excavation work is done by machines. Beginning 2002, with the boom in mineral prices, people abandoned agriculture—everyone wanted a share of the booty, either by illegal mining or by transporting the iron ore. Most areas now lie barren. With streams dried up, people depend on tankers from mining companies for drinking water.

At the entrance to the Koira block development office is a signboard listing its success profile—from check dams and farm ponds to peripheral development. It’s telling: there are no numbers on the white board, only a coat of red iron ore dust.