A device that turns away wild elephants

A device that turns away wild elephants 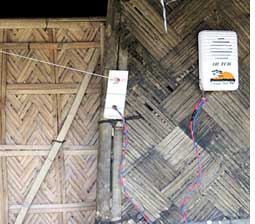 Bolu Nayak doesn't have to buy food for his family anymore. Wild elephants have stopped destroying this poor farmer's land in Lungsung village in Assam's Nagaon district. Crop in his 2.2 hectares are safe, thanks to conservationist Shimanta Kumar Goswami and the 'early warning system' he developed. In 2006, he introduced the simple device on Bolu's farmland. The system not only alerts farmers of straying jumbos, but it also drives them back into forest.

Goswami, director of a local conservation ngo, Green Guard Nature Organization, recalls the misery of the farmers in villages bordering Nagaon and Karbi Anglong districts. In 2005, wild elephants damaged over 300 houses in Lungsung, Nalbari, Jiajuri and Samgaon villages. They destroyed over 90 per cent of the crop, forcing several villagers to take up logging for a living which damaged the elephant habitats.The villagers often resorted to violent methods to drive the pachyderms away. The confrontations became bloody; elephants killed five people while the villagers hunted down three elephants. Desperate, several villagers even thought of giving up cultivation. "It was a very painful situation," says Rajeev Tanti of Jiajuri village. After the villagers started using the device, cases of man-elephant conflicts stopped. Casualties, human or elephantine, too came down.

The early waning system is a simple mechanism that uses strong, two-plus nylon ropes, a few poles and an alarm bell. The rope is tied to the poles, at a height of about 6 feet, and the poles are fixed to the ground at a gap of 200 meters. This network connects to an electric bell on a watchtower (machan).

When an elephant brushes against the nylon rope, hair on its head get caught between the plies of the rope and the resultant tension pulls the hair out. It is the same principle used by beauticians to thread out unwanted facial hair. Local wisdom as well as studies claim, the elephants, quite naturally, detest this and instantly pulls back. Simultaneously, when an elephant comes into contact with the tautened ropes, alarm bells are triggered, alerting people on the watchtower.

The system has so far benefited about 35,000 people in the region. Dulu Borah of Gorshuk village, also a Green Guard member, last year saved Rs 40,000 from his 3.5 ha instead of the paltry Rs 5,000 he used to make. The economic benefit has helped in many other ways; last year there were three weddings in poverty-stricken Gorshuk. This was unheard of in the past seven years. The system also forced villagers to give up the primitive chases with spears and torches. Bolu, an expert in piercing elephants with red hot iron spear, says he will not do it again. "It was cruel. We are now interested in this remarkable device," he says.

People from other villages are now approaching Goswami for his free service. The cost to cover a kilometre with this device is about Rs 2,000 whereas devices that are currently in use, such as electric fencing, cost Rs 1.5 lakhs per km. In 2006, they were able to cover over 17 km, benefiting 60 villages, at a cost of Rs 73,000. A year later, the area came down to 7 kms due to shortage of funds. "We had no support," says Hemanta Sharma of Green Guard. Recently, the organization got a grant of Rs 25 lakhs from a us- based ngo, Fish and Wildlife Service. Sharma hopes this year they can cover over 40 kms. The Elephant Pepper Development Trust, another ngo based in Zambia, has also expressed interest in the device. Experts approve the efficacy of the method, saying it blends traditional wisdom and science. "It is innovative and cost effective," says Parimal Bhattacharya, a professor with the Zoology department, Guwahati University.