The people of several villages in Pune were a helpless lot, until Vilasrao B Salunke stepped in 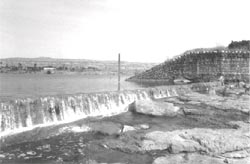 everything is picture perfect in Mahur village, about 75 km from Pune in Maharashtra. Acres of marigold and lilies in full bloom, teak trees and a variety of crops conceal its unpleasant past. This huge tract in the Western Ghats was, till the mid-1970s, barren and untended. Even vast expanses of tended lands did not guarantee a harvest worth talking about. Then Vilasrao B Salunke, then a young engineer who owned a factory manufacturing precision instruments in Pune, stepped in.

With the help of the villagers, Salunke not only brought water to the parched lands, but also instilled confidence and the will to survive among the people. He set up Gram Gaurav Pratisthan ( ggp ), a voluntary organisation, to prove a simple fact: success can be achieved with very little resources. Today, ggp is involved in 55 waterharvesting projects in 25 villages of Pune.
A severe drought hit Maharashtra in 1972. In Purandhar taluka (block), thousands of people had migrated to the cities, where survival was no less an ordeal. The government, as an alternative, employed thousands of people as stone-cutters.

Curiosity led the young engineer to the drought-prone areas. "I saw people breaking stones under the harsh rays of the sun, but I could not understand the connection between the drought and stone-breaking," he says. Salunke went to the commissioner of Pune with the query. The commissioner failed to provide any answer. The same question was put to the stone-cutters. He was met with blank stares.

Salunke then asked the villagers what they really needed. "The reply was 'water in the fields'," he says. The villagers said if rainwater is conserved, all problems would be solved. "They had the solution, but without resources, they said they were handicapped," says Salunke.

Says Laxman Kherkar, who has been involved with the watershed programme in the villages for 27 years, says, "The government did not have a solution to the irrigation problems because the villagers were never asked about possible solutions."

Salunke understood the whole problem. "There was land in plenty, but no water," says Salunke, adding, "I realised that if water conservation, distribution and usage is done wisely, every family here can be given water security -- an essential ingredient for food security."

Salunke started with Naigaon village in Purandhar. He met the villagers and explained his conservation plan. "For the villagers, somebody approaching them to discuss their problems and solutions was unbelievable. They were only used to government officials imposing things on them," he says.

The villagers agreed to give 16 hectares (ha) of land, which belonged to the village temple, on a trial basis. In the first year, Salunke managed to get some 500 villagers to work on constructing check dams to conserve rainwater. To prevent erosion, trees were grown in this patch of land. He also acquired an additional 80 ha of land from the villagers.

Soon, the results began to show up. The first monsoon, though scanty, completely irrigated the 16-ha land but only half the area was used for cultivation of foodgrains. The crop yield increased 10-fold. "It is then that we realised the importance of water. Even the government irrigation officials were surprised," says Kherkar. The groundwater table also started rising.

With the first experiment bearing fruit, the next task was to hand over the rainwater harvesting project to the people themselves. "But, water being a scarce commodity, there was a problem in its distribution," says Salunke. To ensure that the project does not die, he formed water councils in the villages and made everybody a shareholder, and formulated the following five principles to help people retain what they developed:

l Water distribution would not be done in terms of landholdings. There would be per capita distribution of water.

l The people realised that landless villagers were also entitled to water. So to put their quota to best use, landowners who had excess land gave it to them for cultivation.

l Water rights were made non-transferable, that is, even if the owner decides to sell his land, he is not permitted to sell the water rights.

l Salunke asked the villagers to contribute 20 per cent of the cost of the project, the rest being paid by the government, to make them realise that it was their own resources they were conserving.

After the immense success of the first experiment, the movement spread to other villages. "Although we knew that conserving water was the only solution to our problems, we did not know how to do it nor did we have the resources," says Satyaram Gole of Mahur village. His village's story is also unique.

A dam was constructed near Mahur in 1972. Another big dam, Vir, was built on the river near the village. But the villagers did not get any benefits from these projects. Though the villagers owned land, the lack of water forced them to work in the fields near the big dam as labourers.

Thus, when the villagers of Mahur heard about Naigaon's success story, they rushed to Salunke. After a discussion, they returned to collect Rs 32,000 -- 20 per cent cost of the project. It took 30 people six months to collect the amount.

The work commenced in the early 1980s. Today, a pump carries water to a well at the base of the Mahur highlands. Another pump carries the water to an elevation of about 40 metres. Water pipes, altogether 1,585 metres in length, provide water for irrigation in the plains as well as the highlands.

More importantly, people who had migrated have started coming back to the village. Gole is one of them. He was earning Rs 15-20 a day as a textile mill labourer in Mumbai, the state capital. "In 1982, labour strikes in the textile mills had begun. But for the watershed programme, we would have starved to death," he says. Now some villagers in Mahur earn Rs 75,000 to Rs 1,00,000 per annum.

Mahur and Naigaon are just two examples of ggp 's success. Since 1972, when the project started, ggp has spent Rs 6,00,000 on waterharvesting projects, a fraction of what is spent on big projects. However, the results are equally good, if not better. Better still, there are no cases of corruption.


Committees are set up for the management of water resources. For every project, there is one group leader and five executive members. The rest of the villagers are made shareholders or members of the committee. All the groups together form the pani panchayat (water council). The panchayat comprises 15,000 members at present.

While village groups meet regularly, the pani panchayat assembles only once a year. For emergency meetings, the groups can always approach the ggp . But, apart from counselling and providing technical guidance, the whole show is run by the villagers themselves.

As for Salunke, he is now working on several other projects in tribal areas, such as afforestation. Salunke's vision was to bring about a harmony between land, water and human beings. With the land filled with flowers, trees and crops, there is good reason to believe that the vision can come true.