Dearth of knowledge has frustrated attempts to revive a traditional but viable method of making iron. 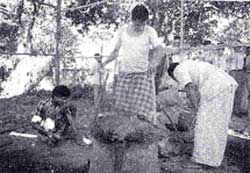 THE HAMMER did not come down while the iron was still hot. Consequently, the traditional method of iron making in India has faded away. Though attempts have been made to resurrect this tradition in different parts of the country, only very few -- if any -- have seen the red hot metal coming out of the furnace.

The experience of P B Srinivas, a social activist, in reviving ironsmelting in the tribal belt of Adilabad is a typical example of how frustrating such efforts can be. At a rececent confrernce on traditional science and technology in Bombay, Srinivas said that in the course of his wanderings in the Adilabad forests in 1992, he discovered several iron-smelting sites and beautiful locks, pistols and other artefacts made of iron in people's homes. He said that in 1993, he was asked by the Council for Advancement of People's Action and Rural Technology to try and revive these furnaces.

"Initially, we didn't know how to go about it because there was nobody who knew anything about the technique. Then, we met a very old man who, in his prime, had seen his father smelt iron," says Srinivas.

"We had hardly begun when we ran into a problem -- getting hold of a dead buffalo for making the bellows, the apparatus used to blow air into a furnace. The trouble was getting an animal that had not been dead for more than six hours, for otherwise its hide would have torn easily torn during skinning," said Srinivas. It took him some time to get hold of a dead buffalo. After a madiga (tanner) hung the buffalo from a tree and skinned it, they thought they were ready to begin the experiment.

However, the old man told them the smelting could be done only at night in the forest -- something that still puzzles metallurgists. "No problem, I thought. But then I found the volunteers, called mudakkams , reluctant to enter the forest at night for fear of being caught or shot by forest guards," says Srinivas.

"However, we did manage to persuade a few to accompany us as I promised to pay them more. And so, we eventually erected the furnace and began smelting. But after about 3 hours of firing blasts, we could not get the wrought iron we expected to come out of the furnace. All we got was a lump of spongy iron," says Srinivas.

He believes one reason for the failure could be the quality of charcoal used. Earlier artisans may have used charcoal derived from a different wood, which had probably been wiped out by the vast teak plantations the British grew here, he says.

Srinivas, nevertheless, says that even if one family could eke out a living from iron smelting, it would pick up easily. Presently, a kg of iron is worth Rs 12. Srinivas believes if they wrought the iron into artefacts and implements, they would earn more.