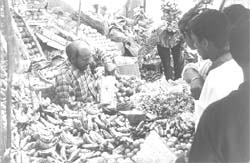 He is lovingly called the ‘polythene baba’ after his successful campaign against polythene bags in the Pithoragarh valley in Uttar Pradesh. Prabhat K Upreti, along with seven other residents of Pithoragarh have proved that where there is a will there is a way, even without the help from the local administration. They have also shown that sustainable campaigns can be successful even with meager funds.

Pithoragarh is around 215 kilometres from Kathgodam. When Upreti, a lecturer, was transferred to the Government Post Graduate College in Pithoragarh, he found that the Chandrabhaga river, which flows nearby, was clogged with plastic bags. Upreti then approached the municipal corporation but it did not respond.

Therefore, he decided to take help from the local people and slowly Upreti’s cleaning drive gained momentum. His colleagues as well as people from all walks of life — teachers, journalists, ex-army officers, doctors, shopkeepers and school children — all joined his drive against the menace of plastic bags. After a report on Upreti’s campaign was published in Amar Ujala, a local newspaper, and its internet edition he received numerous letters and phone calls supporting the campaign.

“We targeted the shopkeepers first, especially the wholesellers of plastic bags,” says C S Negi, one of the members of Upreti’s anti-plastic campaign group. The wholesellers understanding the gravity of the problem stopped supplying plastic bags in Pithoragarh.

“Every Sunday we would go to various residential areas and pick up plastic bags from the roads and clear clogged drains with our own hands. At first the residents were a little amused but once the area was cleaned they understood the importance of our work and started joining the movement. Our belief was that we have to show the way and then only people will listen to our message,” reminisces Negi. The team with the help of schoolchildren also painted posters, distributed leaflets and organised meetings to sensitise people about the harmful effects of plastic. The members paid all expenses from their own pocket.

They also took the anti-polythene message to the neighbouring areas like Munshiyari, Julaghat, Chandag and Champawat. The message spread to Almora, Haldwani and Nainital as well.

This is not the first campaign that Upreti has been a part of. Earlier he had campaigned against plastics in Gopeshwar in 1998. “I saw the ponds in Gopeshwar littered with plastic bags. Several cows were found dead with bloated stomachs full of polythene bags,” he says.

“I met a farmer in Gopeshwar who told me that birds were destroying their crops because they could not eat garbage, since everything was being packed in a polythene bag before being thrown,” he added.

However, at Gopeshwar shopkeepers were not enthusiastic about Upreti’s campaign. “The then district magistrate Uma Kant Pawar helped me a lot and he imposed a fine of Rs 5,000 on anyone found dumping plastic bags. After the fine was announced people started listening,” he said.

But for now, Upreti is happy. After seven months of hard work Pithoragarh is polythene free except for some stray cases. “Paper bags are more expensive, but since the customers have said an emphatic no to them we have to abide by their wish,” says a shopkeeper. For some the cause was more important than their business interests. Mahesh Joshi, a printing press owner is one of them. “I get a lot of orders to print logos on plastic bags but I refuse to do it. Of course this means loosing a lot of money but as it is for a good cause, I do not mind,” says Joshi.

The movement has also created job opportunities for many poor families, as they are able to make paper bags and sell them. However, the activists are sad that the local administration has not done much about their cause. Upreti fears that in the coming days things might change if the campaign is not sustained.

Reported by KumKum Dasgupta from Pithoragarh