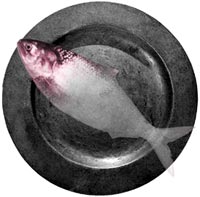 A sumptuous Bengali feast is incomplete without the hilsa . But very soon Bengalis in Bangladesh might well have to do without it. For, the population of hilsa -- the country's national fish -- is fast decreasing in its river system. This alarming trend has been triggered by factors such as overexploitation, dumping of industrial and domestic waste into waterbodies, construction of dams, and siltation.

Hilsa's disappearance has major financial implications for Bangladesh. At present 4,50,000 people of the country are engaged in hilsa fishing. The exports of this fish alone fetch upwards of us $10 million annually. Bangladesh's total income from all fish exports was us $24.77 million in 2002-2003.

Two varieties of hilsa -- Tenualosa ilisha and Tenualosa toli ilisha -- are found in the marine and fresh waters of Bangladesh. But sources in the department of fisheries (dof) of the country's ministry of fisheries and livestock (mofl) reveal that hilsa has either become extinct or its numbers have fallen steeply in 20 rivers. For instance, the fish has virtually vanished from the 170-km-long Karnaphuli river. There has been a 20 per cent decline in hilsa catch from rivers over the past 17 years (see table: On the wane). This despite the increase in Bangladesh's total haul of the fish due to heavy fishing in the sea.

Hilsa's peculiar habitat makes it impossible to breed it artificially through aquaculture, unlike other fish. The adult hilsa swims several kilometres upstream to freshwater from the sea for spawning and returns to saline water after that. The eggs hatch in freshwater and the sub-adult hilsa, called jatka, flows back downstream into the sea, a process that takes a few months. This has been pointed out in a study, Marine Resource and Hilsa Spawning Impact Assessment Between Nijhum Dwip and Hatia South, conducted by the Center for Natural Resource Studies (cnrs), a non-governmental environment organisation.

According to the Bangladesh Fisheries Research Institute (bfri), an autonomous organisation under the mofl, pollution is largely responsible for the decrease in the brood capacity of adult hilsa from over 1 million during the 1980s to about 0.7 million between 1992 and 1998. It points out that almost all industrial units, hospitals and civic bodies of the country release untreated effluents into the rivers. Oil spilled from ships and boats also causes pollution. Besides, nearly 2,750 tonnes of pesticides used for agriculture are washed into the rivers annually. bfri's research also establishes that chemical pollution has drastically decreased the amount of plankton, hilsa 's staple food, in rivers.

Apart from pollution, excessive and indiscriminate fishing presents a frightful scenario. About 32 per cent fisherfolk catch fish the entire year; the others do it seasonally. Adult hilsa entering Bangladesh's rivers from the Bay of Bengal is netted during its upstream migration. This problem is especially acute in the case of southern rivers. The jatka is also caught while it is in the freshwater and during its downstream movement in the Meghna river system. All the fisherfolk interviewed in the cnrs study were unanimous in their opinion that jatka harvest had a major role in the decrease in hilsa population. Even as they denied catching jatka themselves, they claimed to have seen them in "other fishermen's nets". Some held the steep rise in the number of fisherfolk as another reason for the decline. Besides, they said natural factors like siltation and accretion of islands, which reduces the spawning ground, had hastened the downtrend.

A change in the fishing pattern is also believed to have contributed to the crisis. Earlier, only members of a particular community comprised fisherfolk. As per their traditional belief, they didn't fish during a particular period that coincided with the fish's breeding season. But now even other communities are catching the hilsa , and they don't follow this practice.

Meanwhile, the Bangladesh government has finally started taking some measures to save the hilsa . The coastguard has been deployed at 15 river points -- including some islands in the estuary of Bay of Bengal such as Monpura, Dhalarchar, Kallarchar and Moulabarirchar -- to prevent the netting of the jatka. G C Haldar, an expert in hilsa management, has been quoted as saying: "We still have a chance to save the fish, but it is essential to keep our rivers healthy. Further, an effective moratorium on netting small fish is a must." But many others are of the view that the crisis cannot be resolved unless a special ' hilsa area' is developed. This should include Chandpur, Shariatpur, Barisal, Laxmipur, Bhola, Chittagong, Pirojpur, Barguna, Noakhali, Patuakhai and Khulna districts. They also recommend special measures for managing and developing hilsa resources.
Features Rivers River Pollution Fish Fish eSports Endangered Species Bangladesh Aquaculture Web edition Web edition News News News Universal … UIP oral vaccine OPV new vaccines Millennium … IPV
SUPPORT US