A headmaster and his students save a forest

A headmaster and his students save a forest 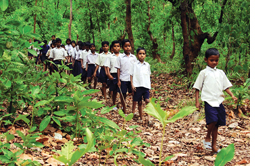 Pangulu Pahada owes a lot to Ramakanta Pradhan and his 60 students for its existence. The hill would have become a neglected barren mount if the headmaster and his flock from an upper primary school in remote Orissa had not decided to protect it, helping a 121-hectare forest on the hill spring back to life. The master and students from the Swastik school in Godbhanga village of Deogarh district in Orissa have been on a battle against fellers and encroachers for 15 years.

Godbhanga is inhabited by the people once displaced for the Rengali dam project. Lying alongside national highway 6, this little less developed village lies a kilometre away from the dams reservoir. The hill just behind the school does not feature in official records since it is part of the submerged area of Rengali dam. The forest on the hill is full of sal trees."Before the dam was built in 1985, this hill -- also known as hati pahada since it resembles an elephant -- was completely denuded. Officially, it was a degraded forest," says Pradhan.

"Though the village is close to the reservoir, our agriculture is solely dependent on the monsoon. We dont have any source of irrigation, nor access to the reservoir water," says Minaketan Sahu, a villager. "We are dependent on rainfed agriculture and forests for our livelihood. The resources were slipping out because of the dam. The rate of forest degradation also increased manifold," says Ashok Nanda, a local journalist. Rejuvenating the forest on the hill also meant replenishing water resources. It was at this juncture that Pradhan, who had come back to the village after a two-year technical education stint, came forward to revive the forest.

Pradhan used his students to motivate the people. "They agreed to be the green soldiers," he says. The team took a year to spread the message that the hill needed attention. "We started keeping a watch on the forest in 1991 and held a public meeting the next year," he says, adding, "People knew the importance of the forest but they thought this was not their property. We told them about the benefits of protecting the hill and the forest and the children would take the lead because they live at the foot of the hill." The idea worked and the villagers also supported them.
They have dealt with all kindsfellers, poachers and encroachers. Armed with batons, the children monitor the forest daily to prevent logging. If they find fellers, they bring them to their teacher. The forest guards also help them. "We are always alert. When we hear an axe hitting a log, we go in a group to fetch them," Pradhan says. 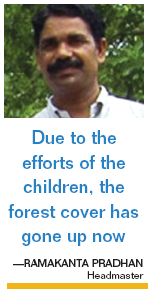 "It is humiliating for the offender to be caught by the children. Now, forest offences have gone down in the area," says Bijaya Mohanty, forest range officer, Barkote. Initially those who were collecting wood were fined. Once the trees grew, villagers were allowed to collect dry branches to meet their household needs. "We let the culprit decide the fines. We dont charge more than Rs 10," says Dileswari Patra, a student. "We have asked the people to enter the forest only with the permission of the protection committee we formed," says Basanti Behera, another student.

The efforts have yielded results; now the wells in the rea bear more water and even the officials confirm the change in atmosphere.

The initiative has prompted other schools in the region to get involved in similar efforts. The school has an eco-club and the students engage in many environmental activities in the area. "The district collector has assured us support which we hope will soon be forthcoming," says Pradhan.