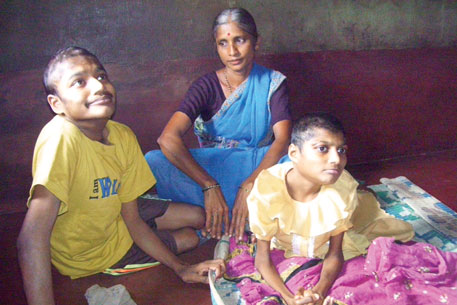 At the sight of their sister returning from work, Sharad and Bharati drop their toys, gurgle with joy and clamour impatiently to be picked up and fondled. A happy family scene, except that Sharad is 19 and Bharati 16. Their mother Lalitha remembers the days she spent in her village Kokkada when she was pregnant. She would watch the aerial spraying of endosulfan in the cashew plantations surrounding her house as a novelty. “We found the entire exercise fun, though there was some irritation and nausea afterwards,” she remembers.

Twenty years on, what Lalitha, a homemaker, and her husband Somappa Gowda, an agricultural labourer, want most are a road and two wheelchairs. “It is very difficult to carry two grown-up children to the hospital,” says Somappa.

The scale of the endosulfan tragedy in Karnataka’s Dakshina Kannada district may be much larger than hitherto estimated. In 2001, Shridhar Gowda, schoolteacher from Kokkada, worked out the link between endosulfan and his own sudden blindness, and found that three villages in the district—Patrame, Nidle and Kokkada—were affected. According to Karnataka Cashew Development Corporation (KCDC), aerial spraying was done in 92 villages in four talukas of Puttur division. But recently, RTI activist from Puttur, Sanjeev Kabakka, found intensive spraying on the scale of neighbouring Kasaragod in Kerala was done in not one but four divisions, comprising 16 talukas. Kabakka found the 20-year spraying involved using not just endosulfan but a cocktail of pesticides like sevin carbaryl, quinalphos, hexacin and monocrotophos.


Shridhar, who has travelled to 84 villages in Puttur, says he found 6,500 patients suffering from cancer, heart and skin problems, cerebral palsy, infertility, reproductive problems and mental retardation. “Some 300 cases are severe,” he says. After 12 years of relentless campaigning by Endosulfan Virodhi Horatta Samithi, which Shridhar heads, the state government ordered a health survey in the spraying-affected villages on September 29 this year. But the survey, which was completed on October 17, failed to do justice to the victims, say Samithi members.

Of the 92 affected villages in Beltangdy, Bantawal, Puttur and Sullia talukas in Puttur division, survey was done in only 78. “In fact, the survey was undertaken on the basis of a list prepared by me,” Shridhar says. “Despite our repeated requests to the administration to survey villages as per KCDC’s list, it was not done,” he adds. The impact of spraying is far reaching. “Women from villages sprayed with pesticides married in other villages. Many gave birth to mentally challenged kids. But they were not included in the survey,” he says.

Deputy commissioner N S Chinnappa Gowda denies leaving out villages or victims. “We have left everything to the Samithi and will include any more victims it informs us about,” he says.

This defeats the purpose of the survey, says Nityananda Pai, medical practitioner and activist in Puttur who helps the Samithi. “The Samithi does not have the manpower or the expertise to undertake a comprehensive survey. We identified victims on the basis of casual observations. We want the administration to take up from where we left, not just follow our lead,” he says.

Samithi members complain the survey was conducted by anganwadi teachers, auxiliary nurse-midwives and Asha workers who are not equipped for the job. “The health impact of pesticide exposure is immense,” says Ravindranath Shanbhag, professor of pharmacology and president of Human Rights Protection Foundation, Udupi. “Patients cannot be identified on the basis of routine questionnaires. Each probe team should have had at least one doctor and a trained lady social worker to win patients’ confidence,” he says. Many patients suffering from reproductive and sexual ailments are ashamed of talking about them. Unearthing all cases requires patient discussions and investigations. “A seven-day survey is unrealistically short,” says Shridar.

The administration did not consult any expert on pesticide poisoning before launching the survey. “Kerala has evolved an excellent system in this regard. The administration should have taken its help. It could have, at least, got an idea of the kind of diseases involved. The questionnaire did not even have a column for gynaecological disorders,” says veteran journalist Shree Padre.

According to the deputy commissioner, the survey was done to draw a list of patients who will be examined at a health camp in mid-November. “A camp is woefully inadequate when 6,000-7,000 serious patients are involved,” says Padre. Preventive steps like ultrasound examination of pregnant women for detection of foetal defects and health check-up of all marriageable age youth are needed to reduce the future disease load, says Shanbhag who has done an extensive research on the health impact of endosulfan. He says if justice is not done he will approach the high court. Meanwhile, on October 12, the high court asked the Central and state governments to provide medical help and rehabilitation to the endosulfan victims of Karnataka and appointed an amicus curiae to oversee rehabilitation. This was in response to a letter by Justice K L Manjunath of the Karnataka High Court, describing the plight of endosulfan victims in Dakshina Kannada and Udupi districts.

Rehabilitation: what it means

“My challenged daughter goes to the rehabilitation centre every day,” says Seetha Gowda of Kokkada, “but all she gets to do there is pack incense sticks. She is not benefitting in terms of health or abilities.”

In 2010, the state government gave Rs 50,000 to 211 families who had handicapped members and a pension of Rs 400 to Rs 1,000 per month to 232 victims in Kokkada, Patrame and Nidle villages. The victims were identified without a proper survey. A day-care centre was also started for handicapped and challenged children at Kokkada. The victims and their families, however, want a more comprehensive rehabilitation. “Doctors say our mentally challenged son can live till the age of 40 if given good nutrition,” says Veerappa Gowda of Golitottu village. “If he does, who will look after him when we die? We want a permanent care centre for the challenged.” The present centre takes children off their parents’ hands for a few hours. The centre should provide healthcare, physiotherapy, psychiatric help and occupational rehabilitation, he says.