A little "war" between the North and South

The public debate between Dutch environment minister Hans Alders and Sunita Narain of the Centre for Science and Environment, covering a whole variety of global environmental issues, including the forest convention and the climate convention, turned into a little "war", as one observer put it. While Alders seemed on the defensive when it came to offering explanations, he was more comfortable with his queries. Organised in Amsterdam by the Evert Vermeer Foundation of the Dutch Labour Party, which is well-known for arranging such debates, the Alders-Narain dialogue brought into focus the differences in North-South perceptions on global environmental issues. It is a debate that could have happened only in the open society of the Netherlands.

A little "war" between the North and South 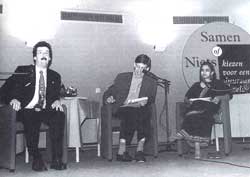 Moderator: I understand your centre was against the forest convention, which was presented in Brazil. For me it's amazing, because as an NGO, how can you possibly go against the convention?

Sunita Narain: Through this convention we will actually end up destroying forests. We strongly believe that the forest convention -- an international law to govern forest management -- is a ludicrous way of managing forests. In my country, just like in several other Southern countries, NGOs like ours have been consistently fighting the government saying New Delhi is too far away to manage our forests. What we need is local, community participation and management. The forest convention would strengthen an international bureaucracy and result in supercentralisation. Not only New Delhi, but global capitals such as Washington and Rome would get empowered as well.

Moderator: Are you against laws that lay down principles that are binding upon all nations?

Sunita Narain: No. I believe very strongly that we have to learn to live in one world. We have to be disciplined as nations. But laws are certainly not a good way of managing member-nations in the case of forests.

Hans Alders: Why not? Are forests an exception?Narain: Because forests are extremely diverse. They are not chimneys which you can shut down whenever you wish. People have found ways to live in them and when you start talking about management of forests, it has to be done in a way that is sensitive to local concerns. Any law that puts together a framework of sustainable management will also have to explain what sustainable management is, before it is laid down.

Alders: I think I would agree with you that forests in India are in a different position than those in the Netherlands. But forests are not only a matter of production, they are also related to biodiversity. So we have to manage them in such a way that biodiversity considerations are respected. By your logic, every country has to prioritise its own requirements vis-a-vis forests. Even the choice for implementation of forest protection principles has to be on its own terms. Wouldn't the forest convention allow for such concerns?

Narain: No, with a convention that won't be the case. A convention can only create a bureaucracy which will then determine what is sustainable management. A bureaucracy will even start determining what is people's participation.

Moderator: But on the local level, you have the same phenomenon, don't you?

Narain: Yes, we do and we are quite prepared to fight the Indian government to make sure that they give control to the local people.

Alders: But can you formulate a goal? You can say that there's a goal we want to reach and only then we can talk about the implementation. What is the use of instruments?

Narain: The goal is forest management, protection of forests in a way that it benefits the local people. There is no other goal. The question is how does one get there: By creating a multilateral institution that is centralised and supranational. With the forest convention all you will get is international bureaucracy, which will be running around determining how forests will be managed.

Alders: But don't you agree that forests, apart from providing resources to local communities, have a global role to play?

Narain: Yes, that is precisely what the US has to say. The US said they want us to protect forests because they cannot control their motor cars. The OPEC countries want us to save our forests because they cannot protect the sources of carbon dioxide. This is exactly what the problem is. Forests are habitats. Forests are for the local people. They are not primarily carbon dioxide sinks. The basic purpose of forests is that local communities need and use them.

Alders: I wouldn't agree with you entirely. I agree that forests are very important for the local community, but the relationship between forests and biodiversity, I think, are equally essential to the functioning of our world.

Narain: But that is exactly my problem.

Alders: The relative importance of the two functions of forests?

Alders: That is why we are talking about principles or conventions. If you don't believe the Western countries only because they have blue eyes, then you are right. But if there is a convention, please remember, we have to do a lot more than the South. We have to regenerate forests in the Netherlands, in Belgium, in Europe before you are in a position to control our forests.

Narain: If you talk of the South controlling the resources of the North, I am afraid I'll have to raise the issue of power levers. How much of a lever do you think the South will have? This was a fundamental problem with the forest convention. If the talks are between the Netherlands and India, we may be able to sit and twist each other's arms. But in such a convention we are not talking about just the Netherlands and India. We are pitted against a global international system, in which I think Netherlands is an extremely powerless player. If not, you would have got your carbon tax by this time, as well as a 20 per cent cut in carbon dioxide in the climate treaty. When we ask why didn't that happen, we are told, "Oh, but there's a more powerful force in the world, namely, the US, and others like that. And it is very difficult to convince them."

Narain: I am not taking it as an issue of sovereignty, though I think probably, my own government did.

Alders: Are you absolving yourself of global responsibility?

Narain: I believe we need community citizenship as much as we need global citizenship because whatever the Netherlands does has its impact on us and vice versa. We definitely need to live together as one world. We are not fighting against internationalism, but we want fair internationalism. It's a viciously unequal world and we are talking about one globe in a very divided world. So the rules of the game have to be fair for you and fair for us.Alders: But you will wait till the rules are fair?

Narain: You make the rules, don't you? I can only push my government and yours to make the rules and protest when they are unfair.

Alders: But in Rio de Janeiro, we were talking about equal rights in a changed world. If we make a choice for sustainable development, we have to change our policy -- not only in terms of one or two concrete problems, but also the way we live together as people in the world. There is a relationship between what is happening around us and the forests. Do we look at forests only in terms of production, only in relationship to the local people, or also in relationship to the climate change policy?

Alders (ignoring the suggestion): Coming to the question of conventions again, for most countries in the North, it's important to discuss the Climate Change Convention and push it through, particularly on the issue of carbon dioxide. I still feel one has to appreciate the value of conventions. I travelled to the US, countries in Europe and to Japan and I have said that we have to take the lead because we are responsible for it. We have to use new instruments, which includes financial ones, to show the South we mean what we say and are prepared for change.

Narain: Since you have raised the climate issue, propriety demands that I discuss this with you. The idea that the climate convention is a step forward is totally misconstrued. To my mind the climate convention is an extremely bad framework within which the world is going to manage its resources. The climate convention says the North is going to curb greenhouse gas emissions because it is more capable, not because it is more responsible; not because it is criminally liable for paying the bills. The convention does not reinforce the question of equity, it does not reinforce the fact that the North has overused its quota of the earth's atmosphere and that the South needs its rightful share of the global commons. The convention is only, and I am underlying the word only, trying to stabilise world emissions by 2000 in an extremely miserly, weak manner. Whether this is proof of the generosity of the North or a reflection of its capability is, of course, a matter of opinion.

Alders: Well, you have a right to interpret.

Alders: I can see your discomfiture with such a financial instrument. In this context, let me tell you that in each of the Prepcoms (preparatory committees) prior to the Rio conference, on several occasions on behalf of the European Commission and more often as the representative from the Netherlands -- even in the Rio conference -- I have reiterated that we are guilty. But there are those halls and conference rooms where people from the North say we are guilty and go home and forget all about their conscientious positions. What we need badly is action. As an NGO, you would agree with me on this. Much as I share some of your criticisms of the climate convention, I need financial instruments to raise prices. This is the only thing that succeeds.

But agreement on financial instruments can only come about through international conventions and that's why I think the Montreal Protocol (an international agreement on the reduction of greenhouse gas emissions) was so important. In the Vienna convention (on the ozone layer) in 1985, we had the directives, but there were no goals, no instruments. In political terms, the minimum we can do to push for any constructive change is to agree on financial instruments.

Narain: The Montreal Protocol does talk about reducing CFCs (a widely-used chemical that damages the ozone layer). The White House took a decision to go ahead full steam and become a bleeding heart for the environment because Du Pont (a large chemical manufacturer) had found alternatives to CFCs. I think it was purely to do with commercial interests.

Narain: You agree? Perhaps you also realise that a lot in your conventions has more to do with crass commercial interests and not generosity. But, in retrospect, the North -- after what it has done for years -- wants to be a little generous, don't you?