Decentralisation in Kerala is the work of a persistent civil society 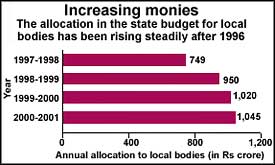 Leftist politicians have a reputation across the world for being immensely centralised in their thinking. So, what was different in Kerala, where the major steps in the decentralisation drive have been taken by the ldf alliance? For one, the socioeconomic conditions desperately called for a change. For another, a highly active civil society made it into a political issue, which the politicians could no longer ignore.

"Both agriculture and small-scale industries sectors were not making any progress in the past few decades due to the bureaucratic system. We desperately needed an overhaul," says E M Shreedharan, a member of the State Planning Board (spb). Even as agriculture sustains more than half the state's population, crop yields are significantly lower than the national average.A study paper prepared by T M Thomas Isaac, who heads the spb's People's Plan Cell, explains that economic stagnation led to overexploitation of natural resources like fisheries and forests. Stepping away from traditional water management systems has made drought a recurrent feature every summer. The result was decline in agriculture as well as in social life. "Kerala was socially stagnant for decades. It was starving for a social intervention to lift its morale," says Shreedharan (see box: Dealing with the suicide malady).

A clear reflection of this is that in the past three decades, no major party has recorded any growth in its vote base. A series of coalition governments made it virtually impossible for any intervention for economic recovery. After returning to power in 1996, the ldf realised that decentralisation was inevitable for its political survival.

To understand the political background of decentralisation in Kerala is not easy. On the one hand, the state has had the right ingredients: land reforms, literacy, powerful grassroots organisations backed by political parties, and a vibrant civil society. But, on the other, it has also had several hindrances: the lack of strong community life, a dominant middle class and a highly polarised society along political party lines.

When the left front came to power in 1957, they were aiming for legislation in favour of local self-government. But the government was dismissed. When the left front returned to power in 1961, it started merging Panchayati Raj institutions and the municipalities into a uniform system. But the first clear sign came only in the 1970s with the setting up of district planning offices. Although the district council law had been passed in 1978, elected representative bodies at the district level could be realised only in 1991.

The district development councils (ddcs) were asked to plan for their districts in consultation with the block panchayats and the gram panchayats. The 1991-92 budget outlay for ddc s was increased to Rs 250 crore. But a Congress-led United Democratic Front (udf) came to power in 1991, and it gradually withdrew the powers of the ddcs. In the following year, the allocation for ddcs came down to a paltry Rs 1.97 crore. However, A K Antony, former chief minister and a top leader of the Congress, says his government did not oppose decentralisation: "What we opposed is that it should not be made a party programme." In fact, it wasn't just the Congress. The same allegation came from the Communist Party of India (cpi), a coalition partner in the ldf government. The cpi accused the dominant Communist Party of India-Marxist (cpi-m) of involving only its own cadres.
But, as the pressure from the civil society was getting stronger, the decentralisation process did not get stalled due to political bickering. "It is a people's programme. It can cause conflict between two parties, but it can never be a single party's programme," says Kutty. By 1996, when the ldf returned to power, the 73rd and 74th constitutional amendments had been carried out, imposing the formal three-tier Panchayati Raj local governance system. "It was also the time for the final heave. We got the constitutional mandate," says Shreedharan. One of the first decisions of the new government was to devolve 35-40 per cent of the state's outlay for projects and programmes in the Ninth Five Year Plan to local bodies, showing a great deal of political commitment to the process.

For the first time, decentralisation of planning was projected as the only way for wider community participation. "The basic guiding principle was: what can be done best at a particular level should be done there itself, and not at a higher level," says Isaac. To begin with, the state government bifurcated the planning process for the Eighth Five Year Plan. A list of schemes and topics for which proposals could be sent from the districts was distributed.

"But fundamental reforms cannot be merely legislated. Legislation is only empty words unless powerful movements oversee their implementation. Legislation is necessary but not sufficient by itself for decentralisation," says Isaac. The People's Campaign for Decentralised Planning was inaugurated in 1996. It is a special wing of the implementing agency of the decentralisation process, the spb. Its functions include large-scale training, policy evolution programmes, and providing a forum for the state's policy planners and economists to debate (see charts: Bottom to top and The money flow).

"Even though the panchayat s have the constitutional mandate for self-rule, the hurdle for their effective functioning was the lack of financial and real administrative powers," says A B Rajan, programme officer of the Programme for Community Organisation, a Thiruvananthapuram-based non-governmental organisation (ngo). "Past experiences indicate that the methods adopted for decentralisation don't work. Their preconditions are either resisted by the highly bureaucratic set up or are just ignored as another set of government jargon," says Isaac. "You don't have to wait till eternity to give power to local bodies," says R Radhakrishnan, former president of the Kerala Sastra Sahitya Parishad (kssp), an ngo with leftist leanings that is involved with popularisation of science. It claims to have forced the decentralisation agenda on the state government

The decentralisation programme is based on the experiences of Kalliasseri, a coastal village in Kannaur district, where the kssp initiated a community-managed development plan. The ngo brought out a book entitled Kerala's Wealth , which extensively recorded the resource utilisation in Kerala. The organisation also set up village science fora to evolve into village-level planning groups. In 1989, after successfully fighting environmentally threatening schemes like the Silent Valley Project and the Kuttanadu Development Project, it embarked on a mass movement for decentralised planning. This was followed by 48 padayatras (marches), covering all the panchayat s in the state.

"Necessity forced the state government to embark on administrative reforms, which are definitely impressive," says M K Prasad of the kssp . "Some political leaders, who were enjoying the role of intermediaries and were calling the shots in the earlier system of centralised planning, were resistant to decentralisation. These leaders came from both the ruling ldf and the opposition parties. There were several cases of local politicians trying to block the process," explains Radhakrishnan. "But the civil society, including several academics, ngo s, and fisherfolk's groups, never let the pressure cool down," he adds.

As the movement gained momentum, the state government appointed a committee to recommend modifications to the state's Panchayati Raj Act of 1994. Called the Satyabrata Sen Committee, it prescribed the principles of decentralisation: autonomy, facilitation, role clarity, uniformity, people's participation, accountability and transparency.

In the first year itself, panchayats were asked to draw up their own plans and budgets and also execute the same. Their allocation gradually rose from Rs 749 crore in 1997-98 to Rs 1,020 crore in 1999-2000 (see graph: Increasing monies). Before 1996-97, the figure was limited to a paltry average of about Rs 20 crore. Now, for 2000-2001, Rs 1045 crore have been earmarked, which doesn't include funds from schemes sponsored by the Centre and institutional loans that can be generated through government schemes. During the Ninth Five Year Plan the state government is giving Rs 6,000 crore to local bodies out of its total outlay of Rs 16,100 crore - more than 37 per cent. "Earlier the panchayat used to get around nine per cent of the planned fund," says S N Kurup, secretary to the spb.

As a result, the state budget is now a list of the local bodies' plans. More than 65 per cent of agriculture related issues have been now transferred to panchayats. The micro-level planning is conducted by the gram sabha (all voters are its members). Panchayats can approach voluntary agencies and even order government officials to be present to help the residents. " Gram sabha meetings are like the discussions in the legislative assembly. The only difference is that the beneficiaries are themselves the participants," says Ratna Kumar J, secretary of the Ezhuvathirujhi Gram Panchayat in Mallapuram district.

The devolution of financial power was followed by the People's Planning Campaign, aimed at empowering the elected local bodies by rallying the officials, experts, volunteers, and the mass of people around them. Most of all, it was to help panchayats put in place the first set of proposals and projects for implementation.Planning was undertaken in different phases, each with distinct objectives. The gram sabhas discussions were held in groups of 20-50 residents. Overall, about 100,000 volunteers were pressed into mobilising the people. It is estimated that nearly 2.5 million people took part in these meetings.

The second stage was to organise seminars to survey the local resources - both natural and human. This was made into a development report for each panchayat, which forms the baseline data for all future planning. These reports were discussed threadbare in seminars attended by all stakeholders. Based on the data collected, each group formed a task force to plan for projects to be passed by the gram sabha for implementation. The campaign became a model. Retired government employees and other professionals have been mobilised to provide technical expertise. "It developed into one of the largest non-formal education programmes ever seen in the country," says Isaac. In seven rounds of training at various levels, about 15,000 elected representatives, 25,000 officials and 75,000 volunteers were trained.