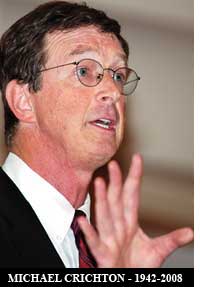 His admirers included US President George W Bush. The Sunday Telegraph called him an entertainment industry powerhouse. His collaborator in films, Steven Spielberg, regarded Michael Crichton as an inspired visionary who, time and again, "identified the hot-button issue of the day and hit it ahead of anyone else."

Crichton is no more. He died on November 6 after a battle with cancer. Crichton was 66.

His books were very popular. The American financial magazine The Forbes estimated Crichton's yearly earnings at us $20 million.

Crichton had varied academic distinctions. He was awarded a medical degree in 1969 and also spent a year as a fellow in Cambridge University's Anthropology Department. But quite early in his career, he had decided against making academics his calling. In 1969, he wrote the best-selling novel The Andromeda Strain, about scientists racing against time to save the world from a lethal strand of bacteria.

Crichton, however, was no purveyor of popular science. He was a trenchant critic of scientific hubris. Much of his work was about systematic breakdowns, he described worlds when science, technology and humankind's thirst for power mixed and ran amuck. The rampant microbes of The Andromeda Strain or the dinosaurs running madly in the Jurassic Park were creatures of a world where science had jumped the human leash.

As potboilers they worked well. A lot of the times, the moral of the story was well-stated. But on most times, Crichton was guilty of butchering the details of the science he described. The killer plague of The Andromeda Strain, for example, was a microbe without dna or rna that turned matter into energy and clotted blood. And at other times, Crichton was way off the mark. Dinosaurs can't, and almost certainly won't ever, be cloned from dna found in blood inside a mosquito trapped in amber.

At times, Crichton was guilty of the very arrogance that he ranted against. He consulted very few scientists about his works. "If we put everything in the hands of experts and if we say that as intelligent outsiders, we are not qualified to look over the shoulder of anybody, then we're in some kind of really weird world," he once wrote.

Scientists responded with equal venom. American Museum of Natural History geneticist described his Jurassic Park books "as a kind of pain in the ass because people were always asking questions about whether or not you could make dinosaurs from old dna." But the harshest criticisms were reserved for Crichton's take on climate change in his 2004 novel, State of Fear. In the novel, eco-terrorists keep research funding flowing by causing unnatural disasters that they blame on global warming.

State of Fear was actually preceded by a speech at San Francisco's Commonwealth Club in 2003, where Crichton argued that environmentalism is essentially a religion, a belief system based on faith, not fact. State of Fear not only became a bestseller, but also propelled its author into public-policy circles.

In the next few years, university audiences and policy-makers got used to the stentorian voice of the six feet nine inch giant; in 2005 he even testified in front of a Senate committee about the politicization of climate change science and had an audience with the US president.

Perhaps, Crichton's impatience with what he called "apocalyptic climate change science" was in keeping with his temperament. He confessed in an interview, "I am optimistic by nature. My prejudice is that we are sufficiently resourceful to see the road ahead, and that we have the capacity to change our behaviour. I envision a long lifespan for the species. We've got a few million years ahead of us." But he could be outrageously self-righteous as well. He had the gall to say, "Everyone has an agenda except me".

The die-hard optimist that he was, cancer made little dent to his output. Even his critics acknowledge the appeal of his stories and the influence they had on the public. DeSalle called his novels, "great devices to teach... any uninterested student of biology." The best tribute to Crichton came from New York Medical College cell biologist Stuart Newman, whose human-animal embryo patent application is mentioned in the Crichton novel Next. Newman, one of Crichton's critics, said, "With all his exaggerations, no one was so attuned to what could possibly go wrong with science."