Policymakers don't need to go too far to eradicate poverty. The solution is as close as is a village well to a villager 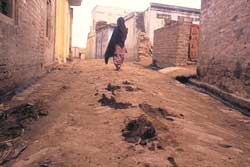 While the Union government is bothered about the high cost of storing surplus foodgrain, groundnut farmers in Anantapur commit suicide. Clearly, measures of poverty need changing. Policymakers must now take into account the time spent by women to collect firewood or water. This distance needs to be shortened as this distance keeps them away from their gross nature product (gnp).

The approach paper of the Tenth Plan -- approved by the National Development Council -- has warned: "We cannot take it for granted that economic development will alleviate poverty." The Planning Commission's assessment of poorest states (including those reported in this story) reports a decline in the growth rate. A candid admission of five decade-old aberration. As examples suggest, villages' prosperity revolves around a few trees and a few water tanks. Poverty is thus a result of environmental degradation, contrary to what policymakers think.

A participatory poverty assessment done in Balangir district in Orissa shatters this myth. Residents, according to this survey, feel that over dependence on forest is an indicator of poverty. They suggested that survival on selling fuelwood is a sign of poverty (see box: Who wants to be a millionaire?).

In a dramatic turnaround, the approach paper of the Tenth Plan has suggested changes in the definition of poverty for the rural people. It says gross nature product will be the measure of prosperity.

But the admission of guilt doesn't ensure that the mistakes will not be repeated. The current legal and institutional framework -- not to mention the fossilised mindsets -- will have to change to give people access and control over their immediate environment. Necessary governance infrastructure like area-specific planning, decentralised development and the right over the crucial resources will have to be ensured. Starting from the budget to the prime minister's cry to use the surplus foodgrain as a blank cheque to rural prosperity may be repeating such mistakes. It will just fund the same employment generating programmes, which have failed in creating the necessary assets in rural areas for ecological security.

The latest India Development Report of the Indira Gandhi Institute of Development Research, Mumbai, points out that by raising the populist minimum support price of wheat and rice -- 91 per cent of which comes from Punjab, Haryana and Andhra Pradesh -- the government is curtailing its expenditure heavily on crucial sector like agriculture leading to lower gdp. "A 10 per cent increase in procurement prices of wheat and rice leads to 15 metric tones of additional stocks, 100,000 hectares of less irrigation and a lower gdp by 0.33 per cent in the third year. And it is adversely affecting 80 per cent of the rural population."

The message is clear: create ecological capital at the village. Otherwise, the prime minister's wish of a 'hunger free' country may be as elusive as the holy grail.