A tale of four rhinos from Nepal's Royal Chitwan National Park to bardia, 600 kilometres away, the rhinos are forced to live in a new place for their own safety 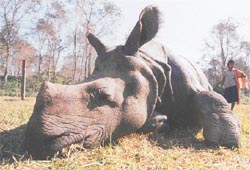 Jagatpur, Chitwan
January 1, 1999
two cages and trucks are ready. It is for Kumar and Shivaram, two rhinos who have been living in Ghailaghari, an unprotected forest near the Royal Chitwan National Park ( rcnp ) in Nepal.

If they were from the wild, taking them would have entailed drugging them first. But they have been living with the people in Ghailaghari so they are not afraid of humans. An attempt is being made to lure them into the cage with their favourite food. But it is not easy to deceive rhinos. Two hours pass by, but the rhinos refuse to grace the cages.

Kumar finally enters the cage - the one kept for Shivaram. After a few moments of displeasure, he seems comfortable in the cage. But Shivaram is not fooled. He is given milk, bananas, oranges and apples. Villagers also bring wheat stalks for him.

Five hours later, Shivaram finally steps into the cage. This time to close the chapter of friendship between the rhinos and the local people. "We wish they would not be taken away. The consolation is that they are being taken for a good purpose. Please take good care of them," says Dilli Prasad Poudel, on behalf of the villagers of Jagatpur in Chitwan.

As dusk sets in, the trucks with the rhinos leave the village. They are headed for the Royal Bardia National Park, some 600 km from where they were born, Chitwan.

Murtiya, Sarlahi
January 13, 1999
At Murtiya forest, there is much commotion. A group of 50-odd people and 10 elephants have come to catch two rhinos. Villagers are gathered in large numbers to watch the adventure of catching the rhinos.

These rhinos are not native to Murtiya. Until February 1998, their home was the Royal Chitwan National Park. "They ran away from Chitwan after being chased by other male rhinos," says Laxmi Prasad Manadhar, chief warden of rcnp .

The rhinos headed east passing through the adjoining Parsa Wildlife Reserve. The local people who inhabit the eastern part of the reserve, shooed them away to further east, on the other side of the river Bagmati. This place has plenty of water because of the Bagmati irrigation canals. The nearby fields have sugarcane crops, rhinos' favourite food, in plenty. Therefore, the rhinos began to live in the small Murtiya forest, a 40 square kilometre mix of natural and planted vegetation.

"The forest provides only a hiding place for rhinos... Villagers go into the jungle for fuelwood, fodder and cattle-grazing. At such times, rhinos could kill them," says Surya Bahadur Pandey, conservation officer of Parsa Wildlife Reserve, explaining the need to take them to Bardia.

Early in the morning, the group comprising veterinary doctors, biologists and park officials enter the jungle in search of the rhinos. Within a few hours, both are spotted together. Elephants encircle them.

It is time to drug them. Dart guns are used for the purpose. Bishnu Lama has been entrusted with the job. He hits one of the rhinos. The tranquilliser slowly acts on it. Bishnu darts the other rhino too.

Finally, the two rhinos lie inert at separate places. Both have to be put in cages immediately. The animals are blindfolded. The vets examine them, while people throng the area. A method to walk the rhino to the cage is being tried. But due to the commotion, one of the rhino regains consciousness and escapes. The other one is loaded on to a wooden platform, which has wheels fitted on it.

Capturing the other rhino will have to wait. For now, the team prepares to transport the unconscious rhino. A day later, the rhino is in its new home. That he is in a bad mood is apparent. He gets out of the enclosure and vents its rage on the vehicle by hitting it twice before entering its new abode.

The officials then continue their search for the escaped rhino. Eleven days later, at 2 pm, the rhino is located. He requires more than five times the normal dose of tranquillisers to fall unconscious. Weighing some two-and-a-half tonnes, the rhino is finally captured, caged and transported to Bardia, where he joins 49 others, mostly reluctant refugees.


It is a shift of residence for the four one-horned rhinoceros. From the crowded Chitwan- Nepal's largest abode for rhinos with 500 of them fighting with each other for space - to Bardia, the second-largest home of the rhinos.

Translocation of rhinos is a new way of setting up a home for the rhinos. "It's not only the physical effort that is needed for relocating these heavy creatures. You need the right spirit," says Mangal Man Shakya, coordinator of Nepal Forum of Environmental Journalists ( nefej ), which along with the World Wide Fund for Nature (Nepal) was involved in the translocation of rhinos.

The Babai Valley in the Bardia National Park is suitable for wildlife, including rhinos. Boasting of grasslands and abundance of water, it is one of the best habitats for rhinos, says Narendraman Babu Pradhan, assistant ecologist at the department of national parks and wildlife conservation.

To develop the Bardia National Park as the new rhino habitat, the government's wildlife department and other conservation agencies such as the King Mahendra Trust for Nature Conservation and the London Zoological Society are planning to relocate more rhinos from other parts of the country. "To see whether they can adapt themselves to their new home or not is a new experience for us. The experience will offer us lessons for the future," says Shivaraj Bhatta, acting chief warden of the Bardia National Park. While the officials learn new things about these huge land mammals, the rhinos are learning to live in their new home.

The article is based on A Tale of Rhino Translocation , a nefej-wwf publication