The inspection and maintenance programme is nothing more than testing tailpipes of vehicles in India. The government should stop wasting resources over this system, which ensures neither compliance nor clean air 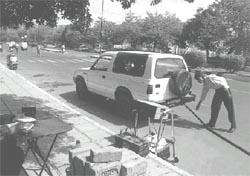 In India, Sections 56 and 59 of the Indian Motor Vehicles Act, 1989, govern i&m of vehicles. A certificate of fitness is issued under Section 56 annually to all vehicles and under Section 59 the government has the power to fix the age of vehicles. i&m got a kickstart when vehicle exhaust emission standards were laid down for the first time in 1990 and the puc programme began.

While no official effort has been made to assess the effectiveness of this programme, the government continues to propagate the myth that it works. Both the government and private companies have issued huge ads encouraging people to go in for the puc certificate. The Delhi government has even funded ad agency, Tulika Advertising Ltd, to secure children's help in influencing their parents to get puc certificates.

The poorly-designed decentralised system of checking tailpipes in India is still conducted on the basis of extremely weak and outdated in-use emission standards. But the government still has no plans for revising emissions standards. Central Pollution Control Board ( cpcb) officials confirm that this is still not a part of the mandate of the committee, which is now looking into the revision of mass emission standards for 2005. So both old and new generation vehicles are tested using the same parameters, but the new vehicles get considerable leeway and could get away with higher emissions that could be due to malfunctioning pollution control devices.

The success of the present puc system relies more on fine tuning the carburettor to keep the air-fuel ratio at the optimum level. To pass the puc tests, the engine must be a very lean engine. The roadside mechanic can conveniently tune the engine accordingly to pass the test. But a lean engine tends to stall and does not have good acceleration. So most drivers resent it when the vehicle stalls at traffic signals and takes time to start again. Drivers also complain of power loss. So there is a tendency to pass the test by adjusting the old carburettor engine to make it lean before the test and thereafter readjusted once again to get a rich air-fuel mixture for more power. Several complaints have also been reported about fake certificates issued by puc centres on payment of extra money.

Even the Delhi transport department's puc compliance status shows that in 1998 as much as 87 per cent of the total vehicles did not have puc certificates. The level of compliance is so low that the highest percentage of vehicles with valid puc recorded was 23 per cent in 1997, when a special drive was launched to enforce the order requiring certificates.

Yet another report, prepared by the Automobile Association of Upper India ( aaui ), an organisation of vehicle users, based on its campaign to verify the genuineness of the puc tests alleges that it is impossible to test the large numbers of vehicles per day as recorded in the puc centres. aaui estimates that any pollution test would take 2-3 minutes for parking and positioning of the vehicles and another 6-8 minutes for testing and adjusting the carburettor. Accordingly, only six vehicles can be tested properly per hour. Based on this estimate, the aaui report comments, "It raises doubts about the genuineness of the testing, when more than 100 vehicles are tested by any service station in one day, assuming and eight-hour work day."

While, on the one hand, the public is harassed, on the other, the government has done nothing to keep its own house in order. A surprise check on the Delhi Transport Corporation ( dtc ) central workshop in Okhla in 1995, following orders of the then environment minister Rajesh Pilot, showed that dtc had only four smoke metres to test a fleet of 2,950 buses in 33 depots. These testing machines were not even calibrated before measuring emissions. Subsequently, in a random check carried out by the Environment Protection Control Authority on the transport department in 1999, a majority of the dtc buses were found to be polluting. Of the 12 dtc buses checked at the Ashram Chowk, 10 failed to pass the test. Buses are usually "gross polluters". People can easily see the smoke public buses belch out. It was even worse in Chennai where the state government tried to exempt all state transport vehicles from any traffic rules and regulations including puc tests (see box: Acting on whims ).

A feeble attempt at looking into the problem of emissions from in-use vehicles was made when cpcb set up a sub-committee under the chairperson of P V Sardesai of arai to recommend an i&m regime for in-use vehicles. This committee, though set up in 1997, has held only one meeting in May 1998. It is yet to provide a firm plan of action. On the basis on one meeting, some loose recommendations were submitted to the cpcb . These include, among others, a centralised inspection system, rigorous audit of the existing puc centres to stop malpractices, organising vehicle-owners' awareness programmes, and administrative measures to penalise non-compliance and training of staff at regional transport offices and improvement in infrastructure. But nothing has happened since.

In the meantime, the automobile industry led by the siam has jumped into the fray to initiate a pilot project on i&m to supplement the official effort. They have come up with a draft proposal and submitted it to the Delhi government. siam has earmarked Rs 1 crore for a model i&m centre in Delhi to test 50,000 vehicles annually. Initially, they will test only commercial vehicles and subsequently extend the facilities to private vehicles as well. Like arai, siam is also proposing a centralised system with the state-of-the-art automated equipment and trained personnel to carry out inspection. But the siam proposal has not taken off as the Calcutta High Court has imposed a stay, restricting private participation in i&m programmes. Unless this order is vacated, private parties cannot participate in i&m .


It is not easy to abandon a programme unless there is political pressure or it becomes an embarrassment for the government. In India, i&m enjoys strong political patronage. Neither does anyone in the government consider the dismal failure an embarrassment. It is another matter that the puc regime in its present state will never make any difference to any city's air. Considering the fact that a relatively small numbers of vehicles are major contributors to the air pollution load, it would make more sense to identify gross polluters through visual inspection and immediately deal with them. A visual inspection programme together with an emission warranty-cum-recall system would create fear and provide support to vehicle owners and ensure that both parties -- manufacturers and consumers -- take appropriate responsibilities.

The Supreme Court has ordered advancement of Euro ii norms from April 1, 2000, for the National Capital Territory and the subsequent revisions must soon follow. But if we are interested in clean air we have to ensure that vehicles once bought continue to have low emissions for a long time. This calls for going beyond the existing certification system with which regulation of norms stops at the factory gate.

In India, a company has to get a certificate from the arai . But the certification process is far from reliable (see box: Testing in secrecy ). Since it is not possible to know the actual emission levels at the time of the purchase, it is also not possible to compare the rate of deterioration that the vehicle undergoes once a vehicle is on the road. The rate of deterioration can be quite rapid, depending on how well it is maintained (the consumer's responsibility) and how well it was produced (the manufacturer's responsibility). As seen from the experience of other countries, emissions of vehicles can increase fast even after proper maintenance if standards have not been maintained for the vehicle's manufacturers. Only an emission warranty-cum-recall system can help to deal with this problem. But emission warranty will have to be accompanied with comprehensive in-use emission regulations and a transparent certification system with civil society representation. Spreading resources to check the tailpipe of each and every vehicle can neither ensure compliance nor clean air.

The writer is coordinator, Right to Clean Air Campaign, Centre for Science and Environment, New Delhi