A recorder of history

A recorder of history 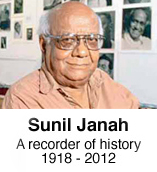 Emaciated people begging for food, heaps of skeletons and dogs foraging on carcasses. The images remind us of a terrible period in Indian history: the Bengal Famine.

It was the early 1940s. P C Joshi, the general secretary of India’s communist party, asked a young amateur photographer to accompany him on his tour of the famine-ravaged province. The photographs, published in the party's periodical, People's War, have shaped representations of the Bengal famine for decades. Sunil Janah, the photographer of these iconic images, passed away on June 23. He was 94. Postcards of Janah's images were sent across the world to raise funds for famine victims. It was a rare period in India's colonial history when the government had loosened its clampdown on the Communists because the party was asking Indians to cooperate with the British in their war effort against fascism.

The reporting assignment brought Janah face to face with a governance failure of mammoth proportions. He saw the diversion of plentiful supplies of grain to British troops, by middlemen who then set prohibitive prices and the British destruction of the barges that might have carried what was available to stricken districts.  This, however, was never reported then. “It was very distressing because I felt like doing things other than taking photographs. People were starving and dying and I was holding a camera to their faces, intruding into their suffering and grief,” he told an interviewer later.

Janah moved to Mumbai, where he became a full party member and a whole-timer living in party headquarters. He received 20 rupees a month, of which 10 rupees went to the common kitchen.  He photographed workers and peasant demonstrations and meetings, he documented the Communist movement and the freedom struggle and its leaders, and recorded the communal violence that tore the subcontinent.

A decade later Janah's photographs of dams, mills, coal mines, power plants, railway engine factories and dams,  recorded a nation beginning its tryst with development. But this was also when Janah began cutting himself off from politics. He increasingly began to find solace in his interaction with tribal people. “I found the most exhilarating breaks from my dreary, urban, middle-class life in India among our tribal people in the forests. I had gone to photograph them and live with them whenever I could afford the long and arduous trips,” he wrote at one place. His photographs of the Muria people, proud, smiling or dancing with gay abandon, break the colonial anthropological tradition where the Muria is a shy, submissive, almost reluctant subject.