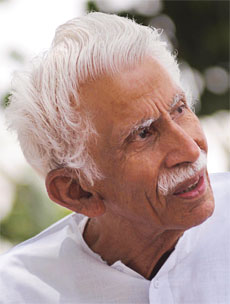 Veerbhadra Mishra, who passed away recently, was seemingly a man of contrasting callings. He was steeped in the 400-year-old Bhakti tradition of Goswami Tulsidas and served as the Mahant (high priest) of Sankat Mochan temple in Varanasi, said to have been founded by the Bhakti saint though the current structure was built by the nationalist Madan Mohan Malviya in the early 20th century. To many of us he was Mahantji. And one of the first sights of the day for many of us was Mahantji descending the steps of Tulsighat, head bowed respectfully in prayer.

But Mahantji was also a man of modern science. He was a professor of hydraulic engineering and former head of the department of civil engineering at his alma mater Benaras Hindu University.

He believed what Tulsidas once said: hypocrisy would put fetters on human development in kalyuga. But at the same time, the professor of hydraulic engineering also knew that those imbued in modern science and those with progressive views would never accept the idea of kalyuga. His scientific training though confirmed what Mahantji had learnt from the Bhakti saint. He evaluated the idea of kalyug, through, the lens of science and found much truth in it. For Mahantji, the religious and the scientific blended seamlessly.

Mahantji derived much inspiration from the Bhakti practice of chanting Ram; the Ganga was another source of strength for him. Protecting the purity of the Ganga became his life long mission. He was the first to describe the pollution of the Ganga in a scientific way and would often say,  “I am a part of the Ganga and the Ganga is a part of me. I want not a single drop of sewage going into the river.” No wonder, many called him Gangaputra (the son of the Ganga)

He saw no contradiction in his spiritual quest and his scientific calling. In his own words, “Science and technology are one bank of the river, and religion, tradition and faith are the other bank of the river. Both the banks need to be firm, and only then can the river maintain the flow.” On another occasion he said, “I tell officials about faecal coliform in water, and I tell people about the muck in the holy Ganga. It’s the same message but I use different languages.”

He took this message world over. The Sankat Mochan Foundation he started in 1982 became his agency for the purpose.

Mahantji was recognised on the United Nations Environment Programme’s Global 500 roll of honour and in 1999 Time magazine declared him a Hero of the Planet. But apathy to the Ganga in his own country pained him, and Mahantji would have gladly traded the honour of being called the second Bhagirath for a greater sensitivity from his countrypeople.

He put forth plans to cleanse the Ganga; the government appointed him to the National Ganga River Basin Authority but all his proposals were stonewalled by bureaucrats. He saw the Ganga Action Plan as a typical case of bad planning by Indian policy makers. “All planning was done in a year. It was a clear case of prescribing medicines without diagnosing the disease. We did not even know the total sewage flowing into the river,” he once wrote.

But Mahantji remained resolute and would often say, “I am not going to abandon my mission of trying to clean up the Ganga. This is my satyagraha, and I know there are a few thousand people who share this mission.”

For Mahantji, reviving the Ganga was not just about reviving a holy war. For him the Ganga was the wellspring of a way of life. It nourished what is popularly called the Ganga-Yamuni culture. It nourished a syncretic culture, which was one of Mahantji’s abiding commitments he took the lead in ensuring that Varanasi remained peaceful after the attack on Sankat Mochan temple in 2006.

Mahantji was a connoisseur of the Dhrupad style of singing, and every year the five-day Dhrupad festival at Sankat Mochan Mandir and the four-day Dhrupad Mela at Tulsighat were among his cherished projects. Often it would take just a phone call from Mahantji for maestros such as Pandit Jasraj and Ustad Sayeedudin Dagar to sing at these festivals.

Gangaputra is not amid us anymore. The Ganga still flows dirty. A fitting tribute will be to clean it up.

Anup Mishra was an associate of Veerbhadra Mishra