The Ladakhi way to beat the cold 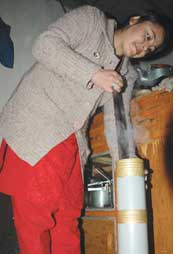 In the chilly month of December when nerves freeze and hands shiver, there is nothing more comforting than a hot cup of tea. But even the spiciest and strongest brew would fail at 3,500 metres above sea level, where temperatures plunge below -20°C in a ruthless winter. People in the Himalayan region, the highest mountain range in the world, know how to beat this cold—with a cup of warm gurgur cha.

The beverage, also called butter tea, is a must in Ladakh and the upper reaches of Himachal Pradesh, including Kinnaur and Lahaul-Spiti. But don’t get misled by the name; the beverage is not made from tea leaves. Instead, it is a heady concoction of milk, yak butter, salt and an infusion prepared from plants available in the Himalayan region.

“In the winters when all businesses shut in the valley, we sit with a flask of gurgur cha and knit socks,” said Norsing Lamo. She runs a tea stall in the only market in Leh, the largest town of Ladakh.

The main ingredient of the  cha is the infusion prepared from chathang leaves or yamdal  bark. The plant used differs from region to region depending on the altitude. People in Ladakh, for instance, prepare the concentrate from fresh leaves of chathang, usually found in the upper reaches of the Himalaya.

“The leaves impart a subtle flavour to the beverage,” said Wangchuk, the manager of Shamba-la hotel in Leh. “They also protect against cold and fever, and help reduce flatulence,” he added. The leaves are boiled and then allowed to simmer for seven to eight hours.

The concentrate is then skimmed and stored for preparing gurgur cha. Preparing the beverage is an elaborate procedure. So, the concentrate is usually prepared in large quantities to last for three to four days.

People in Kinnaur prefer using the yamdal bark. They roast the bark and grind it before boiling it in water.

“One can drink as many cups of gurgur cha in a day as one wants. It has no ill effects; in fact, it protects from heart diseases,” said Nawang Raftan, an octogenarian in Leh.