US biotech industry gears up to play dirty in Europe 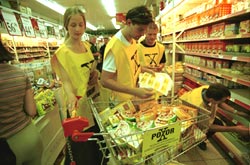 In a major blow to the us biotech industry, the European parliament recently approved one of the world's most stringent regulations on labelling of genetically modified organisms (gmo). The parliament has also decided to retain the ongoing moratorium on the import of numerous gm products till the regulation comes into effect. Though the regulation would be enforced by the year-end if ratified by the European Union (eu) governments, it has already invited the wrath of the us, which has the world's biggest biotech industry.

The regulation states that all gm ingredients, including those in animal food, must be subjected to labelling. Human consumption products like sugar and oil that are derived from gm foodstuff, but whose gm contamination is not traceable, would also be subjected to mandatory labelling. The upper limit for accidental mixture of gm ingredients in products labelled as organic has also been tightened from one per cent to 0.5 per cent. The parliament, however, failed to agree on labelling products that are obtained from animals consuming gm foodstuff.
The regulation has been embraced by environmentalists. "This is a victory for consumers and sends a message to uk's prime minister Tony Blair and his friends in the us," says Jill Evans, a member of the European parliament's green party. The environmental organisation Friends of the Earth (foe), Europe, alleges that Blair had urged his counterparts to vote against the regulation.

Predictably, the regulation has been criticised by biotech giants, including those based in Europe. "We think the thresholds are simply unattainable," asserts Simon Barber from Europabio, a consortium of European biotech industries. But the regulation's main condemnation comes from the us biotech industry that claims that it would adversely affect its trade with eu worth us $4 billion annually. Some us experts allege that the regulation is more of a trade barrier than an environmental or health concern.

To get the regulation scrapped, the us contemplates appealing to the World Trade Organisation (wto). This would not be its first attempt to undermine efforts aimed at labelling gm products. Numerous countries have been its victims, including members of the un Convention on Biological Diversity. The convention urges member countries to evolve laws pertaining to gm products, including those related to labelling. Though not a member of the convention, the us influences the provisions of these regulations, by voicing its views through pro-gm member countries like Canada and Australia.

It also uses wto rules to fulfil its devious aspirations. As per the wto rules, exporting countries cannot reject products unless the objections are justified through scientific facts or concrete evidence about potential health or environmental hazards. Countries like Sri Lanka, Bolivia, China, Croatia and Thailand have all suffered due to this. "The us promotion of gmos is so aggressive that it even tries to overturn laws of others," says Larry Bohlen, from foe, us.
A good example in this context is Sri Lanka, which accounts for four per cent of us agricultural export. Due to pressure from the us, the country had to recently abandon its stringent regulation which, among other things, required 21 categories of foodstuff to be free of gm ingredients. Using wto rules as a smokescreen, the us contended that it would cost Sri Lanka us $190 million in penalties if the rule was not scrapped. Croatia's plan to implement a moratorium on gmos also met the same fate.

Sri Lanka and Croatia are not the only ones. Considering that China is the largest buyer of us soybeans, 70 per cent of which are gm, it is not much of a surprise that the us left no stone unturned to keep the country from implementing tough regulations for gm products. China's intention to introduce the rules figured prominently in discussions held during us president's visit to China in February this year. However, the sweet talk failed to achieve its purpose. In March 2002, China's agricultural ministry introduced a regulation that required all exporters to obtain a preliminary safety certificate pertaining to gm ingredients. It also mandated all gm products on sale to be labelled.

Following its implementation, the us faced an estimated loss of us $180 million within a short span of time. Thereafter, a series of visits by us officials related to 'technical level' discussions on gmo rules followed. By June 2002, China was forced to temporarily resume its us soybean imports that were banned.

The Chinese health ministry, which intended to implement a stringent gm regulation in July 2002, was even manipulated to delay its plan till January 2003. In addition to the agricultural ministry's requirements, this regulation would mandate submitting of an application along with samples of packaging and labelling to get permission for importing gm foodstuff to China.


Things are no different for India, with the Indian government constantly succumbing to pressure from the us. "The Union agriculture minister had recently initiated measures for labelling gm products. But the Genetic Engineering Approval Committee (geac), which is responsible for taking all decisions pertaining to gm products, yielded to objections raised by the us," says Devinder Sharma, a food and agriculture policy analyst. The us in its objections stated that taking any decision about gm products was the sole prerogative of geac. According to Sharma, since the gene bank of Delhi-based National Bureau of Plant Genetic Resources is funded by the us Agency for International Development, it becomes difficult for the government to raise objections against any us decision.

This leaves India -- which has the world's third largest biodiversity -- vulnerable to genetic pollution. geac is yet to wake up to the threats posed by non-existent gm labelling laws. The repercussions of this are already being felt. According to Fair Trading Company, a Japanese firm that imports organic cotton from India, none of the seeds recently imported from India have pure strains. " dna tests show that the cotton varieties are contaminated by hybrids," says Sharma.

The problem gets compounded by the fact that dna analysis centres in India are either substandard or they charge exorbitant fees. Due to this, initiatives are not taken to test gm products and the public is left clueless about the hazards posed by such products. During a study conducted recently by Consumer voice, a Delhi-based consumer awareness magazine, it was found that more than 80 per cent of the 467 imported foodstuff tested did not comply with the labelling norms of the Union ministry of commerce and industry. The norms state that labels of all pre-packaged commodities that are imported to India should, among other things, mention generic or common name of the commodity packed. Experts opine that as a result of such laxness, in case of a conflict with countries like the us, India would lose as per the wto regulations. "There is no inspection or proper enforcement of the existing labelling law that covers all foodstuff," accuses Madhu Saxena, a food safety expert working with Consumer voice.

Agrees R S Seshadri, chairperson of United Riceland, one of the largest exporters of basmati in India. "The Indian government's position on gmo labelling is totally ambivalent," he alleges. "The consumers should assert their rights in order to get the government to act." According to Sharma, strict regulations on gm labelling are the need of the hour. But they should be accompanied with stringent enforcement. "India needs to get its act together before it is too late. Lack of consumer movements is the prime reason behind India's plight," says Shalini Bhutani, regional programme officer for Asia at the Genetic Resources Action International, an Europe-based organisation. It is essential for the citizens to demand introduction of gm labelling rules. This would go a long way in protecting their health and the country's biodiversity.